[Warning: The below contains MAJOR spoilers for Season 10, Episode 4 of Shameless, “A Little Gallagher Goes a Long Way”]

Shameless‘ Gallagher family keeps it real, and this week’s episode, “A Little Gallgher Goes a Long Way,” is no different.

The latest episodes sees the family deal with various challenges, some successes, and a few awkward situations — from Frank’s (William H. Macy) and Mikey’s (Luis Guzman) continued shenanigans to Lip’s (Jeremy Allen White) parenthood journey and Debbie’s (Emma Kenney) major revelation about her baby daddy. Below, we’re breaking it all down but beware of some major spoilers.

On Top of the World After their failed attempt at raising the proper funds for Mikey’s infected port — Debbie took all of the money for a family car — they have a deep conversation in which Mikey reveals his father’s aspirations for him. He always thought he’d be a businessman and so Frank makes an attempt to create a reality where they both are. They begin by hitting up a fountain for some coins before heading to the suit shop, where they deck themselves out.

Their next stop is a nearby hotel that’s serving up continental breakfast, and they manage to scope out a coupe of promising-looking targets. They then pounce on the table where businessmen are dining and steal their briefcases. Making a beeline for the exit, they jump into an Uber where they learn the men’s briefcases include passes to “The Art of Self Promotion” convention, and suddenly their next decision is made.

Plus, Carl's crush, Lip's drama and much more.

While at the convention, they enjoy their time by gathering up free loot and taking advantage of the services being provided. There’s one squabble between them but it’s quickly forgotten as the friends put their differences aside. To cap off the night, Frank brings Mikey to the Michigan Avenue Club — a fancy bar and lounge — where they’re treated like kings.

It’s there that Mikey tells Frank he needs to go back to prison in order to receive proper medical care and as they exit the club, a cop car on the corner provides Mikey with opportunity. Before going on to punch the cop stationed on the street, Mikey tells Frank he can’t do the hustle anymore, and that Frank should never stop drinking. And although it’s a fitting end for their story — for now at least — there’s a sadness that hangs over it. Lip’s continuing to find the answers to his parenting problems with some harsh advice from Debbie. He also checks out a New Mom AA group, of which his new pal Sarah (Idara Victor) serves as leader. When he takes a seat in the circle, the women surrounding him are all too friendly as they offer to cook him meals and help out in other ways. When it’s over, Lip walks with Sarah and it becomes clear Lip is starting to feel like he’s part of the “club.” Sarah also reveals she’s a swim instructor for infants and toddlers, an idea that makes Lip nervous.

He decides to observe as Sarah holds one of her one-on-one classes and he barely keeps his cool when Sarah dunks a baby underwater. The child is fine, but Lip’s anxiety is at an all-time high. Perhaps Tami (Kate Miner) can help as she returns to the Gallagher house unannounced, and Lip couldn’t be happier to see the mother of his son. Debbie goes on her own journey in this episode, all stemming from running into her old friend Megan (Dylan Gelula), who has a group of kids to herself — each with their own fathers and child support. The information and insistence from Megan encourages Debbie to seek out support from her own baby daddy Derek (Damien Diaz). When she arrives at his family’s house, she’s greeted by his wife, Pepa (Danube Hermosillo), who isn’t very friendly, but Debbie won’t take no for an answer about seeing Derek. That’s when Pepa reveals he’s dead, cracking the door enough for Debbie to see they’re holding a funeral ceremony.

Debbie then heads off to the military support office and learns how Derek died — drunk driving a tank into a body of water. She also find out that family receives an insurance payoff but Pepa received the whole payment for her and Derek’s children, excluding Franny from the benefit. When Debbie returns to Derek’s house, she demands her daughter’s money and is turned away, so she seeks legal advice from Megan’s friend. We’re likely to see the drama continue as Debbie never lets things go. 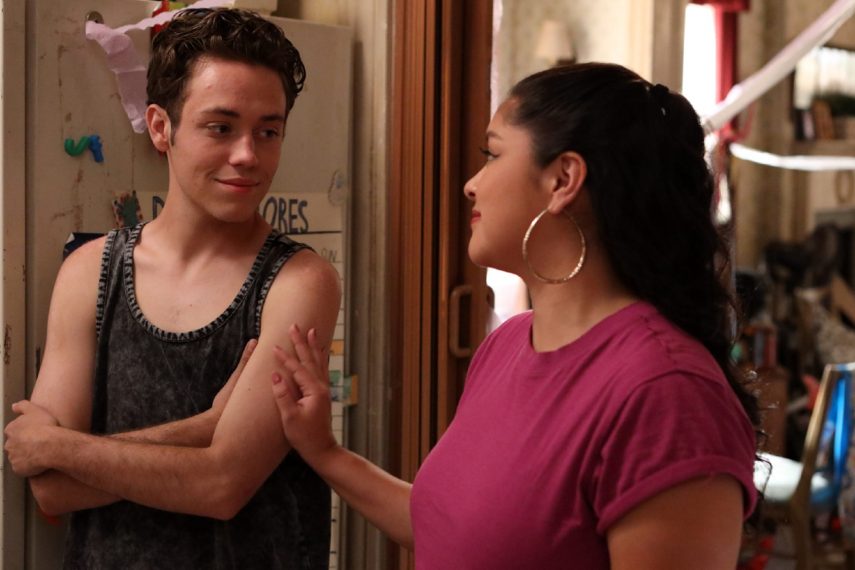 Carl (Ethan Cutkosky) continues to grow his relationship with Anne (Chelsea Rendon) as he helps her family with their business but when ICE comes knocking at their door, it’s a hiding game for most of them. When Anne answers the door, Carl gets defensive for her and once the agents are gone he offers her a place at the Gallgher home.

The kind gesture gets lost in translation though when her whole family shows up at his door. He makes the best of it until Kelly (Jess Gabor) comes walking in. Can you say relationship drama? Liam (Christian Isaiah) and Mavar’s (Anthony Alabi) story also continues in this episode. Mavar reveals to the youngest Gallagher that his great aunt Addie has died and Liam is expected to attend services. The situation sparks curiosity in Liam who wonders aloud what his relative wants from him.

When he shows up at the service, Liam pulls a hustle by taking up a collection which angers Mavar. The move has the desired effect Liam was looking for because Mavar gets aggressive and blames the Gallaghers for making him lose his cool. Liam counters that it’s only because Mavar doesn’t know who he is, but Liam knows who he is. The wise kid walks off, leaving Mavar baffled and upset — could it be a turning point?

Kev and V at the Alibi As Kev (Steve Howey) continues to sell goods through his secret business, V’s (Shanola Hampton) relationship with Mimi (Lynn Chen) grows. When Mimi complains that her sales to certain doctors aren’t working, V offers some advice about wooing the secretaries and office managers at these establishments. The advice works and as a thank you, Mimi offers V a job helping push the drugs she pedals as a pharmaceutical rep. Changes could come to the Alibi if she chooses to accept, but until then, they all share a good time over drinks.

What’s next? Will Ian (Cameron Monaghan) make an appearance from outside of prison considering his previously mentioned hearing? We’ll have to tune in to find out next Sunday.