‘Suits’: Harvey Joins Samantha on a Road Trip to Meet Her Father (RECAP)

[Warning: The below contains MAJOR spoilers for Season 9, Episode 7 of Suits, “Scenic Route.”]

If you could be Harvey Specter (Gabriel Macht) for a day, wouldn’t you take the chance? That’s exactly what Louis (Rick Hoffman) does in Wednesday’s episode of Suits, but what’s meant to only last one lunch spirals out of control.

Meanwhile, the real Harvey is out of the office, on a road trip with Samantha (Katherine Heigl) to meet her biological father, but that, too, doesn’t go as planned thanks to his side trips. And in flashbacks, we learn more about her childhood and a relationship of hers that went south.

Finally, while Harvey’s away, Donna (Sarah Rafferty) plans quite the surprise for him involving a replica of a certain duck painting … which is now hanging in Elliott Stemple’s office while the real one is in his apartment. She’s just going to owe Alex (Dulé Hill) two favors (though Katrina may be taking at least half of one for helping him). 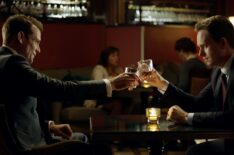 As Donna points out to Harvey, he’s the best one to join Samantha on this trip since he knows what she’s going through. He felt like his mother abandoned him. But things get off to a rocky start when she sees the car they’re driving in; it brings back bad memories for her.

First, flashbacks to 25 years ago reveal that one of her foster fathers had the same car, and when another kid in his care, Adam, busted the taillight, she tried to take the blame. Adam spoke up, but Samantha insisted the man punish her — and he did. That night, she convinced Adam to run away with her in the car, but the busted taillight led to them getting pulled over. Her foster parent after that was Judy O’Brien. The other set of flashbacks go back 10 years, to a time when Samantha and Eric Kaldor were together — or at least as together as they could be considering he was married. He’d gotten the car for their six month anniversary as an attempt to turn a bad memory into a good one, but that didn’t go over well. But it wasn’t as bad as when he told her he planned to leave his family for her. She refused to let him mess up his kids by leaving them and ends their fling. He accuses her of using him to be the father she never had, and she kicks him out.

As for Samantha and Harvey’s road trip, the two do at least get the chance to clear the air about what led to her being fired. He knows she fabricated the evidence because she can’t stand to lose, but he feels he owes it to Mike to think about what’s right and what’s wrong. After all, Mike went to prison for him. Samantha admits that if she could go back, she wouldn’t have done what she did.

Harvey insists on taking the scenic route at one point, resulting in a flat tire. To make matters worse, he doesn’t realize his text to AAA didn’t go through until hours later. After yelling at him, Samantha admits she’s afraid to see her father because he gave her up. She used to tell herself he wanted to keep her but couldn’t, but she’s not ready to hear the truth if that’s not the case. Harvey tells her about his complicated relationship with his mother. He’s a better person for forgiving her, and he knows Samantha owes it to herself to do this.

When Samantha meets her father, she learns he never knew she existed. He and her mother only knew each other for a few months, and she didn’t tell him she was pregnant. Furthermore, her mother died when she was 2, and that was why she went into the foster system. No one gave her up. All that’s left for her to do is let her anger go.

And when Harvey gets home and sees Donna’s present, he calls his mother and apologizes for never holding a grudge against his father and taking so long to forgive her. Will the Real Harvey Specter Please Stand up?

With Harvey gone, Louis decides to pretend to be him at the worst possible moment: when Ted Tucker calls for him and insists on setting up a meeting for that day. But luckily Louis has a Harvey wig. (It’s terrifying.) All he has to do is wear it for one lunch, explain there’s a conflict of interest with another client, and he can feel like Harvey for a short period of time.

The only problem is that lunch goes much better than planned. Ted buys the other company, but its in-house counsel is Harold — who clearly knows Louis isn’t Harvey. Louis goes to Harold and pretends that Harvey sent him to this meeting so the two of them can figure out a way to tank the deal. That backfires when Harold later calls Harvey and accuses him of sending Louis to him because he’s running scared.

Once Harvey realizes what’s going on, he tells Samantha, “it might be one of the funniest things I’ve ever heard.” The two of them have some fun with it, as Samantha calls Louis pretending to be Harold’s secretary. Harold’s on his way to see him now, she claims, and Louis quickly hides. They eventually let him in on the prank, and he admits that he doesn’t have a way out. Harvey suggests he just tell the truth.

Instead of doing that, Louis talks to Harold. The chance to be Harvey fell in his lap and he took it, but he can’t let Ted find out, he explains. After everything he’s been through lately with Faye, he just needed to get out of his own life for a day. All he needs Harold to do is play along for one meeting. The other man agrees, if Louis owes him. But Harold has a change of heart when he arrives for the meeting. He’d rather Harvey owe him a favor, and if Louis doesn’t make that happen, he’ll tell Ted the truth. Louis refuses to be bullied, but Harold caves, asking instead to come back to the firm.

And in the end, Louis comes out on top. As he reveals to Katrina (who knows everything that happened, thanks to her sources), he told Ted the truth and got him a better deal than Harvey could have. “It’s great being Harvey, but I’d rather be me,” Louis says.

Was that Harvey wig one of the most disturbing things on Suits so far?