[Warning: The below contains MAJOR spoilers for Season 9, Episode 5 of Suits, “If the Shoe Fits.”]

It isn’t all fun and games when Mike (Patrick J. Adams) returns to Suits to face off against Harvey (Gabriel Macht) and Samantha (Katherine Heigl), and in the end, Faye makes good on a promise.

And while Rachel (Meghan Markle) doesn’t return with Mike, he does tell Katrina when she asks about his wife, “If I told you how good, you probably wouldn’t believe me.”

The actor left at the end of Season 7, but he's never been forgotten.

Donna cancels plans with Harvey because an old friend called her, and as he learns, it’s because he has plans with that old friend. Mike’s waiting in his apartment to get on Harvey’s case about watching Survivor and how long it took him and Donna to get together. (At least Suits acknowledges this shouldn’t be the first time Mike’s ribbing on Harvey about the latter. “A real friend needs to enjoy the shame in person,” he explains.)

Harvey knows he’s in town for a reason and learns that Mike’s representing a basketball player who wants out of his contract with Brick Street Athletics. Jeremy’s deal stipulates they do no harm to his image, and exploiting overseas workers is harm. He saw one of their factories on a goodwill trip. Harvey’s too busy teasing Mike about not being in his prime to inform him Brick Street is no longer his client. 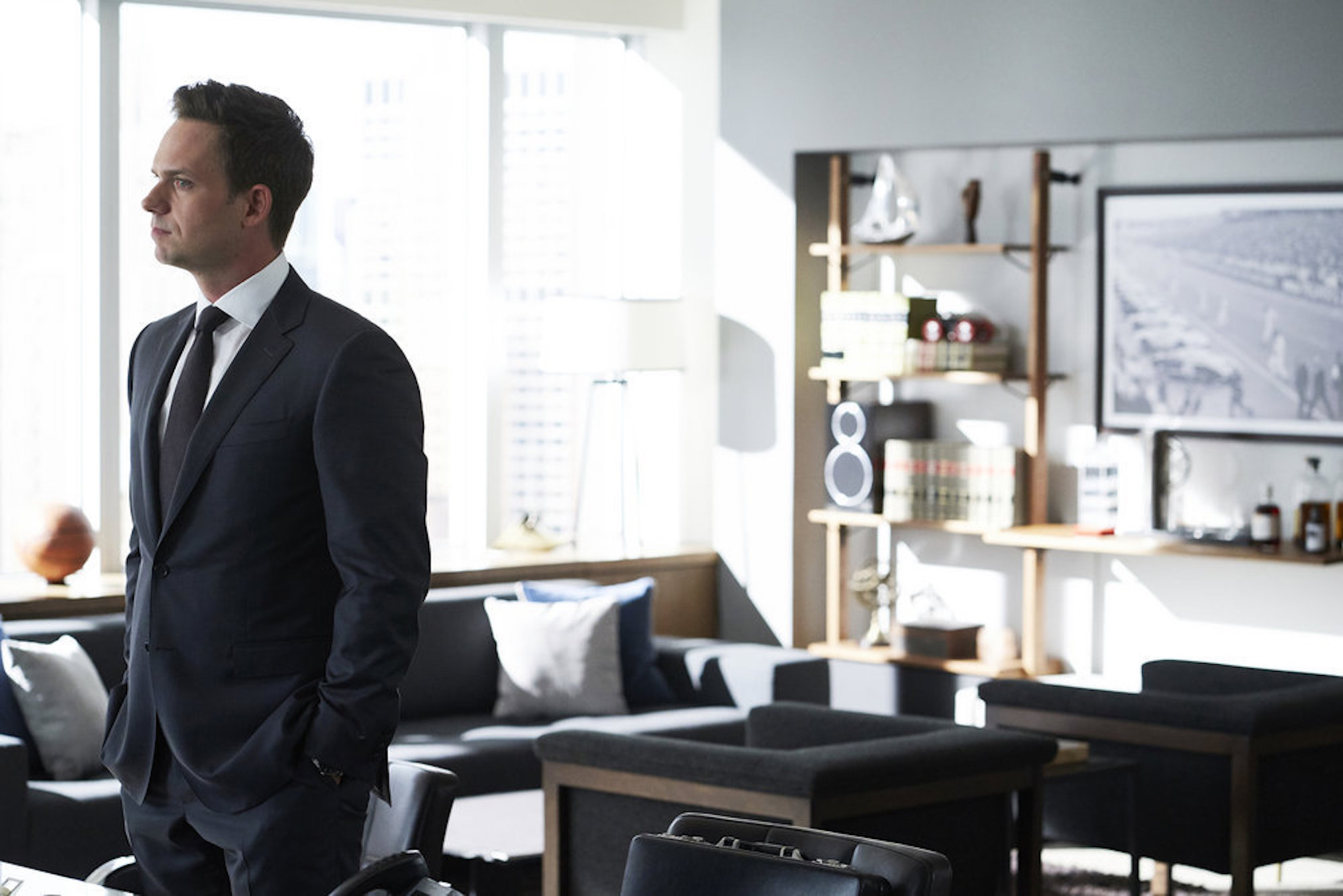 And Samantha isn’t pleased to learn Harvey set up a deposition without telling her, nor does she care about sob stories or meeting Mike. So, even though Mike may have traveled across the country to pick a fight with Harvey, she only agrees to let Harvey work the case with her. “Don’t underestimate him,” Harvey warns him of his protégé. “He’s just as good as you or me.”

Jeremy’s deposition plays out in Harvey and Samantha’s favor. The basketball player visited the factory six months ago, but an activist, Charles, contacted him a year earlier about his concerns and Jeremy didn’t do anything. They accuse him of worrying he wouldn’t be paid.

After, Harvey accuses Mike of bringing this up now because he can’t fight at his full strength with Faye breathing down their necks. They’ll fight fair, Mike proposes. Anything that can get them disbarred or in prison is off-limits, and they have to end on good terms, no matter who wins.

When Donna discovers an ad claiming Brick Street puts profits before people, she alerts Samantha and suggests she cut a deal with Mike. But Samantha doesn’t care that he’s family. Instead, when Mike refuses to back down, she slaps him with a defamation suit, which Harvey informs her was the wrong move. Before, the other side could only ask questions about Jeremy’s contract, but now, they can ask about their manufacturing conditions. Even if they didn’t do anything wrong, Mike just has to make it look like they did to a jury. So, they waive a jury trial; they’ll go before a judge instead.

The deposition of Brick Street’s Raymond Haskins counts as a major win for Mike. “I don’t care how many people have killed themselves” because of poor working conditions, Raymond says. “This has nothing to do with my company. We abide by the law.” And it’s the first part of that statement that’s printed on Jeremy’s T-shirt during an interview that goes viral. While the deposition was under seal, if they sue Mike, it will go before a jury. Harvey realizes Mike set them up. The new Mike cares more about results than the sob story. Jeremy wants out of his contract so he can be the competition, using the money he gets to put into his own company. (The free publicity doesn’t hurt either.) Harvey takes the loss, but he also takes credit for what Mike did as his mentor.

Samantha, on the other hand, can’t let it go. Harvey and Donna don’t have drinks with Mike as planned, because Mike is too angry about someone bribing Charles to say Mike roped him into his scheme. Mike can’t say anything because they’re on record painting the activist as a saint. Once he learns it was Samantha’s doing, Mike wants Harvey to come forward about what she did, even though it would cost her. Harvey refuses. But he does make it clear to Samantha that he doesn’t respect what she did. He defended her to Mike, he tells her, but he doesn’t trust her anymore.

After witnessing this exchange, Faye thinks Harvey fabricated the evidence and Samantha’s covering for him. “Harvey didn’t do anything, and that is all I’m going to say,” Samantha says, leading to Faye deducing she did it. Even though there’s no proof, Faye fires Samantha.

But at least it looks like Harvey and Mike will leave things on good terms after Louis pays Mike a visit. He knows what it’s like to be a rival with Harvey in the workplace but not let it get in the way of their friendship. And Mike has a “You Just Got Spitt Up” onesie for Louis’ baby. (Rachel had saved the last one for him.) Louis and Sheila’s “Cinderella’s Dirty Redemption” roleplaying comes to a screeching halt when the glass slipper doesn’t fit. He thinks it’ll shrink back down after she has the baby, but she informs him it won’t. His focus is on the $9,000 he spent, while hers is on the $50,000 donation she lost by calling a man the wrong name during a meeting.

Rather than do nothing and tell her he loves her like Alex suggests, Louis apologizes to Benjamin and has his replacement $50,000 look like an “anonymous” donation — or so he thinks. As Sheila explains, anonymous donations don’t actually come in anonymously. Now she thinks he thinks she’s incapable of doing her job.

Louis comes up with a solution: a therapy session with Dr. Lipschitz. There, she admits that his donation made her feel trapped in her job. The more she embraces becoming a mother, the more she feels pulled in two directions, and she’s worried Louis won’t want her anymore if she changes who she is. “Being a warrior has nothing to do with your job. it’s who you are,” he assures her. “And no matter what you choose to do about your career, I support it one thousand percent.”

Katrina Learns to Embrace Herself

Donna thinks that the fact that Katrina hasn’t picked a new associate means she hasn’t moved on from Brian and suggests she call him to prove she has. But Katrina has to keep deleting and trying again with her messages on his voicemail. The highlights include: “It’s your buddy, your friend with a capital F, your F buddy,” “Hi Katrina, it’s Brian,” “B-dawg, it’s kitty Kat,” and “Just tell her you love me and that it’s over!” She finally writes a script, ending the message with “cordially.” Upon hearing this, Donna invites her out for drinks, where she gets to the heart of the matter. “Brian was your soul’s way of telling you that there’s more to life than work,” Donna explains. “The person you need to develop a relationship with is you.” She needs to start by doing something for herself one night a week, and Katrina signs up for ballet class. Then, when she sees a voicemail from Brian, she deletes it without listening to it.