If you’re a fan of unsolved mysteries like Lizzie Borden, Mothman, and the Bermuda Triangle, Mysteries Decoded is right up your alley.

Jennifer Marshall leads each investigation of The CW’s investigative documentary series. After five years in the Navy and college, she went to P.I. school. “I thought this is a way I could really help people and I can bring closure to things that the police maybe are not able to do, due to lack of bandwidth,” she told TV Insider.

And that background helps her look into these unsolved mysteries “because it is all about attention to detail and tracking down leads that the average person probably overlooked,” the private investigator explained.

Here, Marshall discusses the unsolved mysteries she looked into for the series and reveals which case she’d like to explore.

Everything You Didn't Know About 'Unsolved Mysteries'

A new version of the docuseries is headed to Netflix, so we're looking back at the original.

Is there anything from your background you were surprised to find particularly helped you during these investigations or any skills you’ve picked up since you started them?

Jennifer Marshall: It’s funny. Probably me being a mother is one of the things that helps me pick up on things that other people miss, just the attention to detail, not accepting a story as it’s presented because I’ve raised teenagers. So they’ll come to me and say, “I want to go here with this person,” and it’s not always exactly as they present it.

Can you preview some of the mysteries coming up? Why is Montauk one of your favorites?

It merges my lives. I play Max’s mom on Stranger Things, [which] was supposedly based off what happened at Montauk. So when I went to Montauk to investigate, it was just really interesting talking to all of the people and being on the base and being there in person to one of the biggest conspiracies in American history.

And this week’s episode, when we went to Point Pleasant, West Virginia to investigate Mothman, that was great. Everybody there was so accommodating. It’s a lovely town, lovely people, and we actually get to interview one of the in-person witnesses who saw Mothman when she was a teenager.

Along those lines, is there anything your investigations have taught you about things like eyewitness testimony, especially with cases like the Mothman one? Or did they just confirm what you knew going in?

I certainly learned a lot during this process, but I don’t think I learned anything to help my investigations. It’s just been more utilizing the skills that I have.

Take a deeper look into the stories and theories that surround unsolved mysteries.

But I’ve been blown away every single time we work on a case as to how much is out there that we just don’t know as the American public. If it’s not publicized, we accept whatever the prepackaged version of the events is and we move on. So getting to interview people and find out the science behind some of these topics, it’s been very enlightening.

Were there any mysteries that surprised you with how much they drew you in as you were investigating? I noticed you said you had a feeling when you were in the room with the ghost hunters.

When I was in there, something or someone did poke me in the side. I felt a prick of static electricity, which only happens if you’re scuffing your feet or you touch someone or someone touches you. They actually cut out a part [where] I said an expletive as I stood up because I was so surprised by it, but of course they can’t air that on The CW.

Discovery's 'Contact' Searches for Answers That Are Out of This World

The series follows investigators as they hunt down evidence needed to prove that aliens have made contact with the human world.

I was so surprised by it and I couldn’t explain it because when they said that there’s this being that’s on the bed that’s going to touch you, I was really just kind of rolling my eyes and I was annoyed because the boots were cutting off the circulation in my legs. Then when it touched me, I was completely surprised because I was focused on, “when are we going to be done with this?”

After that, I never felt the malevolent creature that they saw that was supposedly trying to hit me over the head. I never felt that, but I felt the child come back several times off-camera. That’s what really made me believe in Stephanie because I thought Stephanie was just making a lot of things up, but there were three occasions where that entity came back in the house, I felt her, and Stephanie said, “She’s sitting next to you, she’s sitting on your lap, she’s facing you.”

Any mysteries you wished you’d looked into but didn’t, at least not yet?

There is one that I thought was complete nonsense when I first heard of it. There’s a theory that it was not the Titanic that sunk. It was the sister ship of the Titanic rebranded in an insurance scheme. I haven’t looked into it so much to be able to ascertain if it’s complete nonsense, but there’s a lot of good things that I found that makes me want to take a second look at it. The number of portholes, how much the ship listed to one side, why this captain was rehired after he had been in two accidents previously, the White Star Company, how they owned both of the ships. It’s very, very intriguing.

What makes The CW the perfect place for this series?

We like to watch things when we can give our undivided attention whenever our schedules are free. The great thing about The CW is it airs on actual television at a certain time and they put it up online for people to watch.

And I also think it’s great because there are members of the younger generation who may not be as familiar with cases like Lizzie Borden and the Bermuda Triangle as some older people are. I just think it’s the perfect network and it’s the perfect format for both education and entertainment.

And it’s great, because The CW has shows where they look into the paranormal, so you already have that built-in audience who’s watching shows and they say, “Well, wait, what is the actual story behind this?” 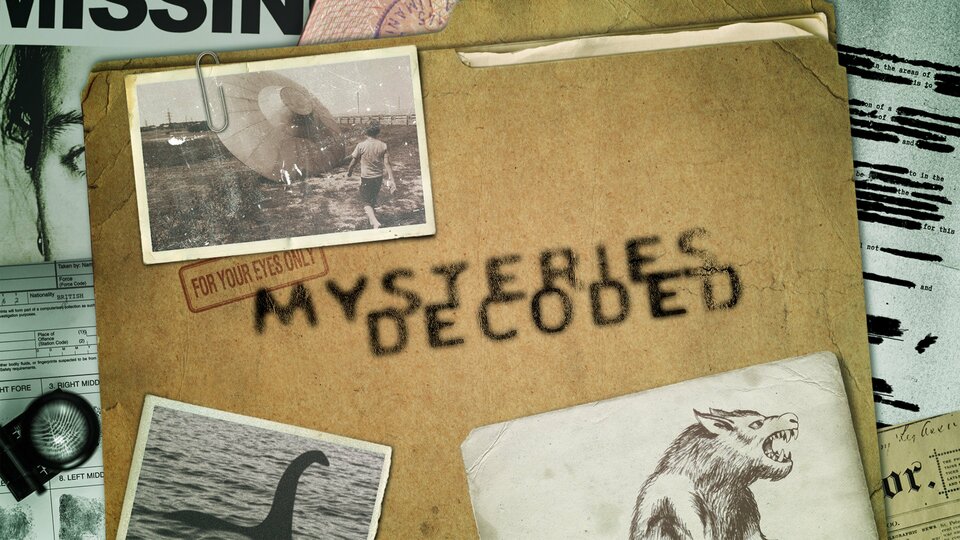 Mysteries Decoded where to stream