What Happened Between Jordan & Jenna on ‘Bachelor in Paradise’?

Watch out, Bachelor Nation — Jordan Kimball will be returning to the beach for another shot at love on Season 6 of Bachelor in Paradise.

The last time we heard from the model, he was involved in a chaotic text message scandal (see, Blake and Caelynn, you guys aren’t the only ones!) which ultimately ended his engagement to Jenna Cooper.

Jenna and Jordan were once the picture-perfect couple during Season 5 of Paradise. So what went wrong? Why did the two call off their engagement? Let’s refresh our memories…

After the Paradise reunion, a man claiming to be Jenna’s off-camera boyfriend spoke with blogger Reality Steve and said that Jenna had been using Jordan to further her career.

“Jenna is a manipulator,” he said. “She manipulated me. She manipulates the other guys she ‘networks’ with and is apparently manipulating this Jordan guy. She uses men for money and business help and loves the attention along the way. And she just loves to rub in your face that she’s pretty and everyone wants her and how she can easily move onto the next. I’m tired of the bullshit and am calling her out.”

The unidentified man even provided Steve with screen shots of text messages, which Steve allegedly confirmed were in fact from Jenna’s real phone number. In the text messages, Jenna says that her relationship with Jordan was only for television and was never real. 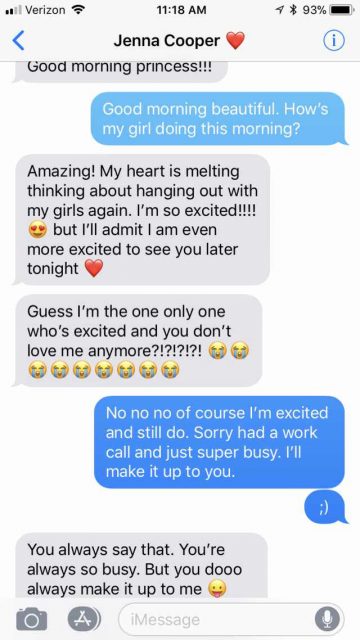 Jordan ended the relationship with Jenna

Jordan couldn’t trust Jenna after seeing those text messages. He even appeared on Reality Steve‘s podcast and confirmed that while he didn’t want to believe the text messages were really Jenna, it’s an accurate representation of how she talks via text.

“It felt like a body drop,” he told People. “I got taken down. I’m weak in the knees and I feel like I have rocks in my stomach.”

The model also took to his Instagram page to confirm that he was taking time for himself after learning of Jenna’s betrayal.

To think, to feel, to fall. These emotions interact with experiences and people, when you find a person you think about them, you feel when they feel and sometimes you fall. When you’re in love with even the experiences you’ve had with them it’s something to respect. Being careless with someone that you give your heart to and reach milestones with isn’t sensible no matter what the terms may be. I have not had an easy life and having struggles allows me to grab onto tough times and discard them from my path. I deal with unreasonable circumstances reasonably and have come to terms with a decision to remove myself from the relationship, it breaks my heart to think, feel and fall for this. It’s dropped me. Fumbling emotions and being understanding is not easy. I’ll be taking time to pursue my inner peace and she will always have me to talk to, if you’ve reached out to me, allow me time. Thank you to those that have.

Jenna got her phone “forensically analyzed”

In an effort to do some serious damage control, Jenna’s team took to her Instagram page and revealed in a now-deleted post that the phone was going to be forensically analyzed to prove that the texts weren’t real. 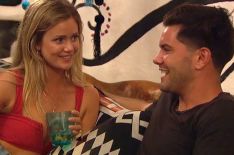 Jenna’s rep later released a statement to People, “A comprehensive forensic examination of Jenna’s devices by an independent third-party expert has definitively confirmed none of the text messages in question came from Jenna’s phone. Given the conclusive findings of the forensic report, Jenna’s team is considering all options available to Jenna relating to the fraudulent texts.”

Been walking on sunshine lately🤗☀️Never wanna stop❤️I’ve had so much support for my new business, and I appreciate all the love! I just want to thank everyone who is being so positive and shining light in this world that needs it so much!✨

Now, Jenna is writing a book about Jordan

The blonde beauty revealed to Us Weekly back in May that she is writing a book that will set the record straight about her relationship with Jordan.

“I am no longer under contract, and I am ready to share the details,” she said. “I know America has heard some of the obnoxious lies about me from Bachelor Nation’s most thirsty contestants and gossip blogs. But now it’s my turn. I have gone to great lengths to prove that all of these accusations were false. I hope that it will inspire other women to stand up for themselves despite being victimized and bullied.” 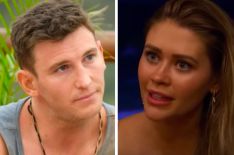 Jordan, however, didn’t have the most positive reaction to Jenna’s new project.

“I’m not entertaining anything she says,” he told Life & Style. “It’s almost been a year and she is still at it. What a nightmare. I never threw a stone at her but she uses terms such as ‘bullying.”‘

Jordan hopes to move on in Paradise

Despite his tumultuous past, Jordan has high hopes for Season 6 of Paradise. In the extended trailer, Jordan is seen saying, “Someone is going to be calling me daddy by the end of this.”

He even took to his Twitter to tease his upcoming arrival, alluding to the fact that he will be bringing the drama.

Everyone’s really dragging out this drama…. lol just wait until next week. Layers like an onion