Fans who will be mourning the loss of Suits after its ninth and final season, which begins Wednesday, July 17, can get their dose of legal drama thanks to the drama’s upcoming spinoff series Pearson. At the center of the new USA Network series is familiar face Jessica Pearson (Gina Torres), the disbarred New York attorney coming to grips with her new role of fixer for Chicago Mayor Bobby Novak (Morgan Spector).

The cast includes Bethany Joy Lenz, Chantal Riley and Isabel Arraiza. Also starring is Simon Kassianides, who portrays Nick D’Amato, the mayor’s head of security. The Brit, seen in everything from Nikita and Burn Notice to Marvel’s Agents of S.H.I.E.L.D. and the Bond film Quantum of Solace, is excited for the finished product of an 18-month gestation period from pilot to air. “It really highlights important issues in a responsible way,” Kassianides said. “Race, politics, corruption, immigration. There are current issues the show handles in an entertaining and dramatic way.”

The London native teases the shade of grey on the show and that D’Amato “straddles both worlds, providing a lot of answers and questions.”

Before the premiere, we pressed Kassianides for further intel on how he got into character, building on the Suits legacy and immersing himself in the Windy City.

How much of a fan of Suits were you?

Simon Kassianides: I’ve watched Suits from the start. I was always watching it. It was really difficult being a fan of the show and having the audition and going through the whole process. I had a bit of separation of mind, body and state.

The seeds of Pearson were planted in the Season 7 finale of Suits. Do you feel that helped get you mentally prepared for what was to come?

They are very different feels. Very different character. You’ve never seen my kind of character in Suits before. Pearson is another animal. It has elements that you’ll love from Suits. The fast lines, humor, but it exists completely in another realm. It’s more about the 95 percent versus the one percent. It’s a lot more grittier. There is a huge mystery and thriller element to the show. They are kind of different beasts. I was aware of certain things, but I didn’t have to match any kind of tone or sense Suits with my portrayal.

You mention we haven’t seen a character like yours in this world before. What more can you tell us about Nick D’Amato?

He has a man with a strong moral code. He is the head of the mayor’s security detail. He is a Chicago cop, which comes with its own legacy and history in itself. Nevermind the mysterious background and the secrets he carries very heavily on his conscious. Nick D’Amato is a very troubled guy. There is a lot of mystery that unfolds itself during the season and develops alongside him getting close to Jessica Pearson.

Given your resume, how would you say those roles compared to this one?

I’m very proud of the different roles that I’ve played. I had to process this one completely different. I spent time in Chicago and got to meet some cops. I got to sit down with them and ask them some pertinent questions that I thought was very important to the role I was playing.

I have not played a character like this before. I’ve certainly had some drama, but this is a whole new level that I’m really excited to share with the audience because he has a lot of complex issues to face. I’ve tried with everything to bring a sense of empathy to the role rather than make it two-dimensional. So there is a lot of heart and what I hope empathy for the audience with the journey into this guy. It has been a real challenge, but something I’ve relished. 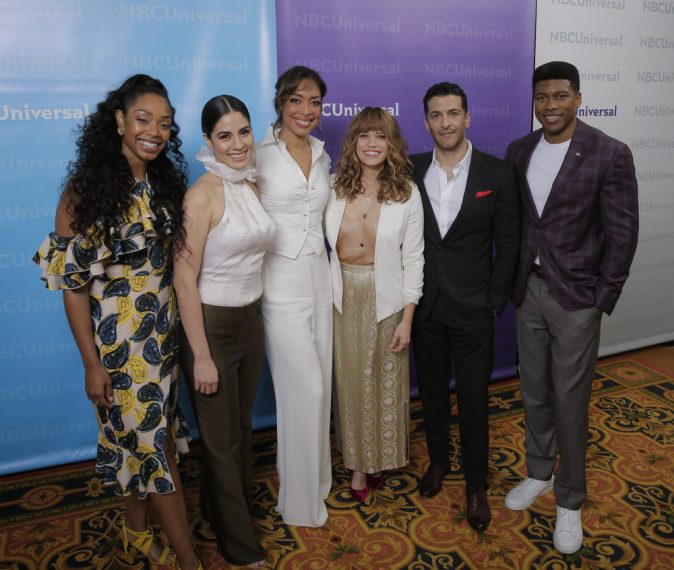 You hint at Nick getting close to Jessica. I see on social media some of your photos on set. What is the atmosphere like with Gina at the forefront?

I think it’s inherent to the structure of the show. You’re on a big platform and aware of the fan base, so you have a responsibility we are all very proud to uphold. There is this overriding sense of pride and achievement and respect to the fan base because we are aware how fortunate we are to have that and want to nurture it. The cast and production of the show involve the same structure and teams that make Suits. So you are in a group of assured people who know what they’re doing.

They’re very used to this level of production value and quality. The fact Gina is our number one, you have this class act woman and person in power that has so much respect for everyone around her. There is that kind of osmosis that goes through the cast, which is really unique in my career. There is a wonderful sense of unity. I think they were careful in choosing cast members that had a sense of mutual respect. I’ve totally bonded with everybody, especially Gina. She has become a friend. You talked about going to Chicago. Was that your first time there?

I hadn’t been to Chicago before. I went earlier than everyone else before the pilot to spend time with cops. I did that on my own back and asked to go on my own. I sought out some police officers on my own completely, so I got to see the side of the city I hadn’t seen before. I loved it. What a melting pot. I’m a huge fan of jazz. I’m actually currently wearing an Andy’s t-shirt, the jazz club there. I’m a big fan.

How forthcoming were the police officers to give insight?

I approached them in a bar. I met them in a bar. I went to a cop hangout. It wasn’t like a phone call or organized thing. I sought these people out and sat with them. They were on duty hanging out waiting for a warrant to go. They were officers in plain clothes. I wanted the truth. They said, “Look, be you.” There really is no such thing as playing a cop like a stereotype. Humanize it. They have an approach cops have, which I picked up on. I had very fortunate insight, and I hope I’ve done the role justice in their eyes.

So when it comes to pizza, now, do you go traditional or deep dish now that you went to Chicago?

Listen, man, as long as there is more than one slice, I’m happy.