‘The Bachelorette’ 2019 Premiere: Hannah Unleashes the Beast on a Guy With a Girlfriend (RECAP)

It seems like only yesterday we were watching Colton Underwood take showers and jump fences on The Bachelor, but it’s actually been two months since he put a ring on it asked Cassie Randolph to be his girlfriend. Now, it’s no longer about Colton and Cassie (sorry guys, it’s been real). Tonight, we shift our focus to Hannah Brown, the beast herself, our new Bachelorette.

The Bachelorette premiere had its fair share of roll tides, first kisses, and even a premature elimination — so let’s not waste any time and jump right into the Episode 1 recap.

We kicked off tonight’s episode with a little trip down memory lane. Hannah takes Chris Harrison back to her hometown of Tuscaloosa and we get to see where she grew up. This was sweet until the two stumble into a hardware store and, for reasons unknown, Chris Harrison starts asking a random employee what he thinks of Hannah. The random guy confesses that he’s “so proud” of Hannah, to which she seems genuinely flattered. I must ask, what is going on here? Who is this guy and why do we care about what he thinks? Even more, why does Hannah seem so invested in what this guy is saying about her? Perhaps he should come out of the limo on night one.

We cut to Hannah in a dance studio with a bunch of little girls and I guess everyone is cool with grazing over the fact that she’s now apparently a children’s dance teacher. Perhaps she works at the dance studio and the hardware store part time and is just fitting this whole Bachelorette thing in between shifts. Clearly, this isn’t important enough to explain, but still important enough to keep in the show. Whatever you say, ABC.

Finally, after a few awkward clips of Hannah pretending to walk on the beach and contemplate life, we meet the men.

So, there’s this guy Luke P. who thinks a little too highly of himself, if you ask me. What caught my eye at first was that his introduction showed a scene of him taking a shower. This is pretty rare for a contestant so he’s definitely going places. You can tell this guy is totally full of it but apparently he’s going to be important this season so ABC is doing everything in their power to make him look like a decent guy, hence why he’s seen holding his brother’s newborn baby for 90 percent of his intro. To be honest, I’m surprised we didn’t see him help an old lady cross the street. There’s also Joe, who who makes boxes for a living (???) and refers to himself as The Box King. While I don’t think he’s a total match for Hannah, I do appreciate his puns. Instead of a limo, Joe shows up in a cardboard box filled with styrofoam peanuts and says, “Hannah, this package isn’t complete without you.” Cute, Joe. See you in Paradise.

A few other memorable limo entrances: Cam — the guy who already got a rose from Hannah on the After the Final Rose special — rapped for us once again, Connor S. who paid homage to good ol’ Colton and jumped the fence for Hannah, and Peter the pilot who gave Hannah a pair of wings. Then of course there’s Luke S. who I can only assume is on the show because he looks exactly like Nick Viall. ABC must have to fill some sort of quota.

After all of the limo entrances, Hannah gets some one-on-one time with the men. Naturally, Luke (the egotistical one, not the Nick Viall one) pulls Hannah first and I can already tell what kind of role he’s going to play this season. Within the first 30 seconds of speaking with her, he calls her the most beautiful girl he’s ever seen in his life. IN HIS LIFE. He also admits in a confessional that he can already see himself falling in love and marrying her. Run, Hannah, run!

Hannah also spends time with Jed, who serenades her with a song on the guitar and I think I’m in love. Hannah admits she has a crush on him (same), so it’s safe to say he’s going to stick around for a bit.

Everything at the mansion seems to be going great until Demi and Katie from Colton’s season show up ready to cause trouble. Apparently, Demi was told that Scott, one of the contestants, was in a relationship and she has to give Hannah the bad news. Hannah seems shocked, but not too upset. It’s clear she didn’t really have a connection with this guy and he probably would’ve been sent home anyway. Still, she has to unleash the beast on him because, you know, ratings. She pulls him outside to question him and immediately he goes into full blown denial mode. According to Scott, he has a girl back home but she’s not really his girlfriend so therefore Hannah has no reason to be concerned. Nice try, Scotty. 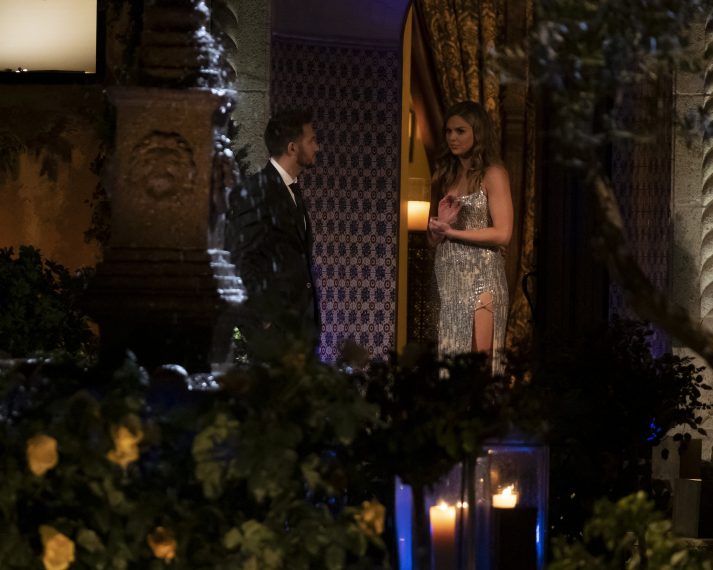 “There’s 29 other guys here who I’m hoping are here for the right reasons and don’t have other girls just waiting at home if this doesn’t work out,” Hannah says. “You’re here taking up so much time and it’s not fair to me and it’s definitely not fair to that girl who thinks she’s your girlfriend back at home.” TELL HIM, GIRL.

From medical emergencies to declarations of love and more.

After Hannah sends Scott packing, she goes outside by herself to take a breather. Luke P. sees this as a brilliant opportunity to steal more time with the girl who he’s already designing an engagement ring for after 15 minutes of knowing her. He throws a couple of cliche one-liners her way and it works out in his favor and he ends up nabbing the First Impression Rose. “I feel like I’m living an absolute dream. This is amazing,” he says before giving her a kiss that can only be described as an invasion of the mouth. This is a family show, Luke. Calm it down.