It’s been a tough season for Jason Hayes on SEAL Team.

“Emotionally, it’s been quite a roller coast ride,” David Boreanaz said about his character’s journey in Season 2. And you can expect more ups and downs — likely mostly the latter — through the May 22 finale as Jason deals with being Bravo 1 and a single father and continued tension with Ray (Neil Brown Jr.).

TV Insider spoke with Boreanaz about Jason’s state of mind, the team, Clay’s (Max Thieriot) recovery, and that flirtation with Julia (Kristy Swanson). 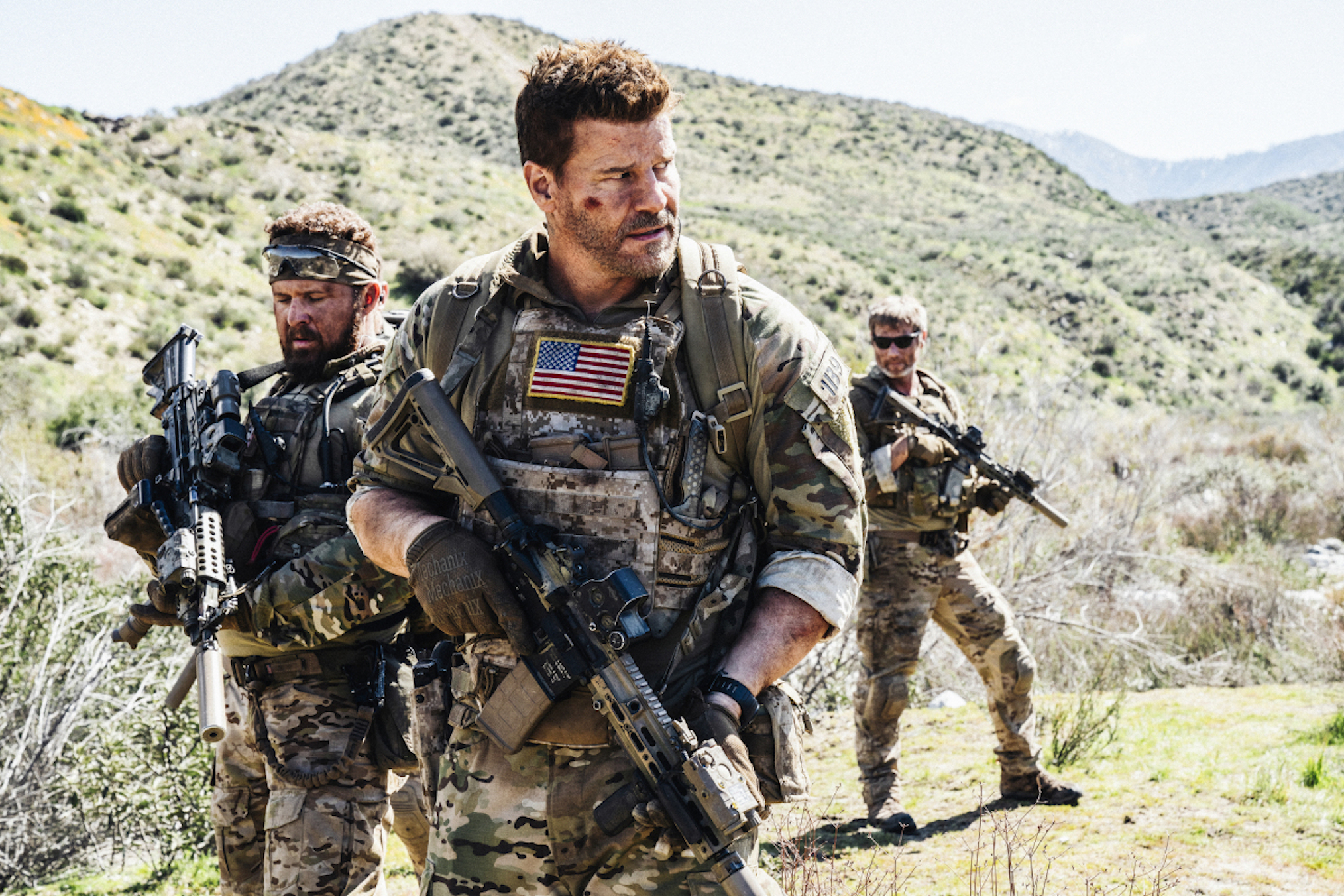 How is Jason’s state of mind going into the rest of the season?

David Boreanaz: It’s been a journey for all Bravo Team this year and for Jason in particular. Early on, there was a pretty emotional drive for him being that his wife was killed in an accident and he found himself dealing with that and being a single parent and compartmentalizing that on top of being a Tier 1 operator.

So for him, emotionally it’s been quite a roller coaster ride and the first half was a tell-tale sign of the strength of the series in regards to being able to kill off a main character, create that conflict, and also show the vulnerability of a character like Jason to be able to find some resolve and some strength inside to get back to Bravo Team after that incident and continue on into the mid part of the season.

[That’s] where he really grappled with a lot of issues of trying to prove himself in certain areas, trying to figure out how to be a parent when he was not such a great parent to begin with, given the job that he has.

Towards the end, he finds himself grappling with Bravo 2 and seeing him go down some paths that Jason may have gone down and that creates a lot of conflict and angst between the two of them.

By the end of the season finale, we will get some answers, but they won’t [be resolved]. They’ll really be opening up more conflict for Jason. Let’s talk about the tension between Jason and Ray. What does Jason think of Ray’s recent behavior and what can we expect when it all reaches a breaking point?

We’ll find in Episode 21, the one that I directed, that Jason will come to the realization that he should have pulled Ray out maybe a lot sooner. He let Ray try to figure things out on his own. As [Tier 1] Operator, you have to do what’s best for the team and be able to see those pitfalls and pull your team members together.

Because if one’s not working, then the team’s not working. It’s not just two or three. Everybody’s gotta work for the type of job that they do.

He grapples with that and you’ll see how he deals with it. Plus, he also hinted at a 'Buffy' collaboration on his show 'SEAL Team.'

How would you compare directing SEAL Team to previous shows you’ve directed?

It’s a totally different show. [Episode 21] was pretty intense. We were on location, really had to rally the crew and the cast to do some things on mountaintops, up on ledges that were pretty high up. A lot of work with choppers and Black Hawks and horses.

You see a parallel split between Bravo Team trying to track Ray, as he got lost. What does Bravo 1 do? Does he continue on the op? That’s his job. That’s his responsibility. You also have Clay back home and him dealing with his journey of coming back and rehabilitation with Swanny (Tony Curran).

There’s quite a striking contrast between the worlds. There’s three worlds going. You got Bravo Team in the hunt. You got Neil off, being chased down, by some intense terrorists. And then you have Clay on his own journey, coming to grips with his reality.

How does Jason view Clay’s recovery, both as a team leader who needs to think of the entire time, and as a friend?

They’re in different worlds. Clay’s back home rehabilitating, and he’s got to come to grips with that. I’m somewhere in Kashmir, the mountains, dealing with my mission, my operation. I’m not seeing him specifically. I know he’ll come back. Jason’s focus is his job. As a Tier 1 Operator, you work and you get the job done. You’re protecting your country. Will Clay Return to Bravo Team on 'SEAL Team'?

Clay was caught in an explosion that left him in critical condition.

In this particular instance, he sees Clay as someone who is going through some rehab. Maybe Jason’s been there before so he can sympathize with him, but at the same time, he has got to continue to lead Bravo Team where Bravo Team needs to go.

What does Jason think of Davis (Toni Trucks) becoming an officer? We saw how worried she was about telling everyone, then they threw her that party, but there’s been a lot going on since.

That scene when Davis came in and told the group that she was going to go to officer school, Jason’s feelings were pretty straight up. He thinks, “Go for it.” He’s fully supportive. What’s coming up with Brett Swann. I’m enjoying watching what happens with someone after they leave the Teams, especially with what’s happening with Clay, but he’s the most involved. Will we see Jason or the others getting involved, or is that not on their radar?

It’s on his radar, for sure. In the season finale, in 22, when they do come back, we’ll deal with that and what that has in store for them, I can say it’s going to be pretty powerful.

Moving on to Jason’s personal life. You touched on him losing Alana at the beginning of the season, and he’s had his flirtations since. But Julia seems to be the first real possibility for something. What’s coming up there?

That depends. You gotta let the road unfold for the character and the fact that he was able to, midway through the season, he put [his wife’s] death behind him, and [he’s] getting over that slowly. I don’t think he ever really recovers from that. Life goes on. As far as Julia’s concerned, I think that there’s definitely something there. I don’t think there’s anything heavy or committed. For where Jason is right now, he’s got a lot to deal with.

In the season finale, we’ll see him open up a little bit, where he’ll have to confront not only his relationships with his team, but himself and possibly with this woman, so we’ll see how that unfolds.

He’s definitely going down a path, but I don’t know how that’s going to unfold as far as long term is concerned. I think it’s good for Jason heading into the season finale and seeing him come to grips with all of it.

Do you think this path he’s on will lead him into therapy? He was very against it in the last episode, but he could use it.

No, I think he can. but I think in the pilot episode, we opened up with Jason Hayes in therapy and going through some stuff.

Whether or not he’s open to it or goes to it, that’s two different things. I think he’s the type of guy, who, may need help and needs to go, and then when he actually goes is really a tell-tale sign. It’s one thing to say he’s going to go and needs help, another thing to actually show up.

That’s a battle with these guys, and the battle doesn’t stop. It’s continuous. They’re spinning their wheels with that one in a lot of ways. We saw Jason talking about a new job offer earlier this season. Will we see him thinking about a life away from Bravo Team again before the end of the season?

Anything can happen. Let’s hope he gets out alive. Who’s to say he even gets out alive? No one’s safe really in this job. What’s great about the show is it allows itself to see the reality of it and how we portray these characters, everyone is open to getting hurt, getting killed, so we’ll see how that unfolds.