Will Clay Return to Bravo Team on ‘SEAL Team’?

[Warning: The below contains MAJOR spoilers for Season 2, Episode 18 of SEAL Team, “Payback.”]

Bravo Team is down a brother, but is it ever going to be in Clay’s (Max Thieriot) future again?

The April 17 episode of SEAL Team wastes no time in revealing Clay’s fate, and there’s good and bad news. The good news is he’s alive. The bad news is more complicated.

The bombing in Manila leaves him with traumatic damage to the femoral nerve in both his legs. While the surgical grafts and reconstruction appear to have been successful, the neural pathways may never heal completely. The ongoing risk of sensation loss could compromise his safety and mobility in the field.

All he can do at the moment is begin physical therapy and rehabilitation to regain strength in his legs, but he also has to accept that he may not be able to return to his previous position. But according to his physical therapist, he comes “a long way” in four weeks and reaches his “inpatient rehabilitation benchmark.” That means he’s going home, an important step in his recovery.

Physically, he may be doing better, but psychologically is a different story.

He’s ignoring calls from his teammates and refuses to call them back until he knows when he’s returning to the team. That could be months, if he is cleared. When Davis (Toni Trucks) stops by to see him, he’s cold and upset that she’s even thinking of walking away from her dream to be an officer. 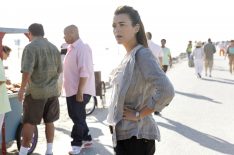 “Navy can’t afford to lose any of the good ones. Get yourself right,” he tells her as she leaves. The same can be said of him.

And “getting himself right” means he needs to change his outlook. Once home, he’s ready to write off a future with Bravo Team, even going so far as to try to take down the flag above his bed. “I’m not on Bravo anymore,” he says. “I don’t keep pictures of my ex-girlfriends laying around, either.” It’s a good thing Brett Swan (Tony Curran) is his roommate right now because Clay needs to look at him as a “cautionary tale” and someone who can help him through this. “Look, when I left the Teams, it sucked,” Swan tells him. “Some days, I couldn’t find a reason to get out of bed. Thinking of them out there, dropping the hammer, it’s tough.”

But Clay’s not at that point yet. “Only one acting like you’re leaving is you,” Swan points out. “The doctors haven’t ruled out clearing you to operate. Navy hasn’t discharged you. Teammates haven’t given up on you. Hold on to Bravo as long as you can, ’cause when you’re really out, you’ll realize the Team was everything you had.”

It’s not until the end of the episode that Clay video chats with his teammates before going to his first outpatient rehabilitation session. He wishes he could’ve been with them when they went after the man responsible for the bombings, but as Jason (David Boreanaz) says, “You were here, man. You’re always here.”

Clay has a long way to go before he can get back to Bravo Team, but he’s on his way. Fans expect to see him return and think that Swan will help him do so.

Thank god swanny came around when he did. He’s gonna be the main reason Clay doesn’t give up on himself until bravo gets home #sealteam

Sound off with your thoughts on Clay’s recovery and attitude in the comments below.