The time: 1959. The place: Hollywood. The man: Rod Serling, age 34, famed writer of socially conscious teleplays that have become poison to studios beholden to sponsors. Serling seethes. He creates a crowd-pleasing sci-fi anthology series, hiding in its eerie episodes fables about poverty, race and greed — along with the wry humor ad men hated. “I knew I could get away with Martians saying things,” he jokes. He’ll never know that six decades later, his show is still a masterwork. Or that the entertainment world’s hottest behind-the-scenes talent, Jordan Peele, age 40, would be taking us back to The Twilight Zone.

It’s Christmas Eve on “A Traveler,” the April 18 episode of streaming service CBS All Access’s The Twilight Zone. The city hall employees of Iglaak, Alaska (population: 936), are partying their version of hard. (The pie is out!) Inuit sergeant Yuka Mongoyak (Marika Sila) is driving her brother Jack (Patrick Gallagher) to the drunk tank with Doris Day’s rendition of “Here Comes Santa Claus” — which Jack deems “Qallunaat” music, using the Inuit word for white people — blaring over the police radio. 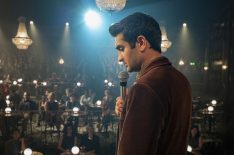 It’s a Yuletide tune that’s cloying to sober ears. Worse, Yuka is hauling him in because every Christmas Eve her boss, Capt. Lane Pendleton (Greg Kinnear), throws a holiday shindig and pardons someone from the cells. The problem: The cells are empty. Hence: Jack.

But the cells aren’t empty. A man calling himself A Traveler (Steven Yeun, The Walking Dead) is mysteriously locked in one of the cages. He is wearing a zoot suit, has suspiciously long feet and seems to know everyone’s secrets. Let’s just say he’s out of this world. Or as the series’ narrator (originally Serling, Peele here) states dryly, “The truth can take many different forms depending on how you look at it.” “A Traveler,” as you can probably tell, is a seven-layer Jell-O mold of subjects, metaphors and lessons. It touches on colonization, religious freedom, belonging. It examines ego: Lane saunters around playing President, Santa and God. (Minor spoiler alert: It’s still not enough for him.) It examines solitude: Yuka purposely separates herself from her brother, her coworkers and her boss. That’s a lot.

“Serling’s original pushed the boundaries of storytelling while simultaneously teaching us about society,” Peele says. “It also just scared the s–t out of me as a kid, and that aspect cannot be understated.” Certainly, Yeun’s character is spectacularly creepy even before his true nature is revealed. Scary s–t is kind of Jordan Peele’s forte. After writing and directing only two horror films (2017’s Get Out, for which he was the first African-American to win a Best Original Screenplay Oscar, and 2019’s Us, already breaking box-office records), he’s already being called a genre auteur by respectable critics.

In “The Comedian” — the first of The Twilight Zone’s two-episode April 1 series premiere — Kumail Nanjiani plays a stand-up who can make people disappear by talking about them on stage. He gets a little overzealous.

Zone’s second installment, “Nightmare at 30,000 Feet” — which stars Adam Scott and is not a remake of Serling’s classic “Nightmare at 20,000 Feet” — ends in a haunting mix of Lord of the Flies (hint: remember Piggy’s death?) and Night of the Living Dead. “Nightmare” also has that trademark Serling humor. Check out its use of the Frank Sinatra hit “Fly Me to the Moon.” (Additional episodes drop weekly on Thursdays starting April 11.)

Peele, however, wasn’t the first talent attached to the reboot. The project had been kicking around for years, starting in April 2012 when CBS announced the series was returning as an original interactive project that would be part TV series/part video game. An odd concept, especially considering the fact that fear in many Twilight Zone episodes results from the protagonists being in situations they can’t control. The CBS All Access series, premiering April 1, takes the Rod Serling classic and turns it on its head.

Eight months later, X-Men director Bryan Singer came aboard, bringing on Simon Kinberg, executive producer of the X-Men and Deadpool series and now Peele’s partner in Zone’s current iteration. They got as far as meeting with Serling’s widow, Carol Serling.

In 2016, with CBS’s streaming service in full swing, the idea of basing it there sprouted. “Our door was wide-open to do a version of The Twilight Zone,” CBS All Access content chief Julie McNamara says. “I heard so many pitches about how to potentially reboot it. We needed a version that made sense. We needed to know ‘Why do it now?’ and ‘What elements are key to you?'” Kinberg and Peele, another massive Twilight Zone fan, met for the first time two and a half years ago. “The second I brought this up as a project I hadn’t been able to crack, we immediately started this incredibly intense brainstorming,” says Kinberg. “And then we had such a clear vision of what the show could be.” They won over McNamara.

The harder part: convincing Peele to be the narrator. Sketch comedy (Mad TV, Key & Peele) made him famous — and he feared his face would be too associated with laughs. “We wanted him to do it so bad,” Kinberg says. “What was critical about Rod being the original series’ narrator is that he was also the primary author. So you felt as though you weren’t just watching an actor who was reading lines written for him, but you were watching this person who was this sort of godlike author. To him, they were big, big shoes to fill.”

Peele admits he was scared at the prospect. “I did not want to make this like, ‘Oh, he’s doing an impression of Rod Serling.’ I’ve gotta be real, I’ve gotta be me. And I have to own it.” His narrator has Serling’s ageless look and sly wink, but a more deadpan delivery. He does the job. Zone also hired 10 writers and 10 directors, and by September 2018, the team was in Vancouver shooting. The settings varied (an airplane, the Oval Office, a diner), as did the cast. Big names such as Seth Rogen had signed on — and signed nondisclosure agreements. And to Peele and Kinberg, it was very important that each episode be wildly different in tone, theme and character, but also have some connective tissue.

There was even a set of rules to follow..

This is an abbreviated version of TV Guide Magazine’s latest cover story. For more from our conversation with the showrunners and cast of The Twilight Zone, pick up the issue, on newsstands now.

Episode 1, “The Comedian,” is free to watch on YouTube until April 14

The Twilight Zonewhere to stream