‘Dangerous Book for Boys’ and ‘Unfortunate Events,’ Alexis Arrives on ‘Dynasty,’ a ‘Strike Back’ Reunion

The Dangerous Book for Boys (streaming on Amazon Prime): A kid’s imagination is a wondrous thing—and much the best part of this sweetly sentimental six-part family series from co-creators Bryan Cranston and Greg Mottola, inspired by the best-selling guidebook. This Book is the legacy of a beloved inventor father to his three boys, but only the youngest, Wyatt (Gabriel Bateman), full embraces it, propelling him to modestly scaled flights of fancy where he reconnects with his late dad (Chris Diamantopoulos) for gentle life lessons. Diamantopoulos doubles as the dad’s cheerfully ne’er-do-well brother in the sitcom sections of the show, which play like a tepid Malcolm in the Middle that could use a bit more wacky danger. Luckily, Erinn Hayes (who’s survived Kevin Can Wait nicely) is on hand, offering emotional balance as the boys’s stressed mom, and Swoosie Kurtz steals her scenes, providing comic balance as the hippy-dippy granny. Dynasty (8/7c, The CW): The great disrupter has arrived to shake up the world of the Carringtons: Alexis, now played by prime-time soap diva Nicollette Sheridan (Knots Landing, Desperate Housewives). Will she have the sort of impact Joan Collins made on the original series? Doubtful, but there’s plenty of conflict as Alexis makes a claim on Grandpa’s will, and naturally, Fallon (Elizabeth Gillies) tries to undercut her. Even more predictably, Cristal (Nathalie Kelley) sees her as a threat to her already rocky marriage to Blake (Grant Show). 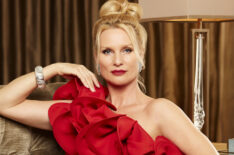 Strike Back (10/9c, Cinemax): Good news for loyal fans: Scott (Sullivan Stapleton) and Stonebridge (Philip Winchester) are back—not rejoining Section 20, mind you. The former Strike Back stars are now private mercenaries, and they find themselves on familiar ground as they’re caught in the crossfire of a shootout between sharp-shooter Grace Novin (Alin Sumarwata) and a group of assassins. They’ll also be around for next week’s season finale. (The show was just renewed for a sixth season.)

The actors hint this won't be the last time they reprise the roles of Damien Scott and Michael Stonebridge.

Inside Friday TV: All 12 seasons of the Steven Bochco police-drama classic NYPD Blue are available for streaming on Hulu. Dennis Franz’s searing performance as the self-destructive Sipowicz is one for the ages. Among his memorable partners: David Caruso, Jimmy Smits, Ricky Schroder and Mark-Paul Gosselaar. … The Showtime documentary New Wave: Dare to Be Different (8/7c) shines a light on radio: the cutting-edge suburban Long Island station WLIR 92.7, which bucked trends and defied the FCC in the 1980s by programming New Wave and punk pioneers, helping popularize music by the likes of The Clash, The Cure, Depeche Mode, Duran Duran, Talking Heads and U2. … Alex O’Loughlin directs this week’s episode of CBS’s Hawaii Five-0 (9/8c), in which the ex-wife of the man who shot Danny comes to the island to reveal how Danno saved her life. Jimmy Buffett, who recently opened the Broadway musical Escape to Margaritaville, returns as Frank Bama.

The Dangerous Book for Boys