If looks alone could kill, The Alienist would be more entertaining than alienating.

Spectacular production design transforms Budapest into a version of 1896 New York City more reminiscent of Dickensian London, befitting the grim and gruesome doings from Caleb Carr’s bestselling historical whodunit. Unfortunately, what was fascinating on the page falls flat on screen, at least in the first two episodes, with nostril-flaring acting more suitable to the silent movies of a century ago.

Daniel Brühl is a sullen cipher as ahead-of-his-time criminal psychologist (known then as an “alienist”) Laszlo Kreizler, who enlists a high-society illustrator (bland Luke Evans) and an ambitious female police secretary (snappish Dakota Fanning) to track whoever’s out there killing boy prostitutes. It’s all quite sordid and gratuitously grisly, but only Douglas Smith and Matthew Shear as Jewish twin-brother detectives and cutting-edge forensic nerds seem to be enjoying the hunt. 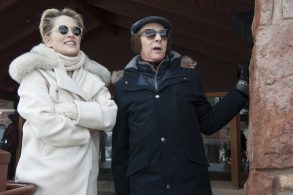 Another mystery that sounds better in theory than practice, Steven Soderbergh’s six-part Mosaic (airing nightly through Friday) started life as an innovative experiment in interactive storytelling on a fancy new mobile app, where you get to choose the point of view to follow. I didn’t play that game, and given what a dull dead end the linear HBO version turned out to be, I’m not likely to.

As a prickly children’s-book author with horrible taste in men (though Paul Reubens is fun as her dishy confidant), the glamorous Sharon Stone supplies what little verve exists in an otherwise studiously naturalistic tale of corruption in the Utah mountains. And she’s gone after the second episode.

FX gives an unflinching look at the designer's murderer, played by Darren Criss.

Her disappearance and presumed murder casts suspicion on the con man who seduced her (Frederick Weller, channeling Christian Slater) and the hired hand she tried to seduce (stoic Garrett Hedlund). It’s pretty obvious early on who’s behind this and why, and a time jump further reduces urgency, when the con’s sister (a frosty Jennifer Ferrin) works to clear his name. Suffering from Netflix-style bloat, Mosaic is less binge than indulgent slog.

Mosaic where to stream