If you were hoping to see something happen between Beau and Jenny, that wasn’t exactly the case. Rather, after seeing Sunny (Reba McEntire) kill Buck (Rex Linn) after she found out he was the Bleeding Heart Killer and had kidnapped Emily and Denise (Dedee Pfeiffer) and then go to prison for it, he did go to her place, but we’ll have to wait to see if anything will happen.

Ackles breaks down the finale, Beau’s feelings for Jenny, and more.

I have to say how seamlessly Beau has fit into the world of Big Sky since his introduction last season.

Jensen Ackles: It’s never easy coming onto an established show and trying to find your footing. I came in [the] third season on The Boys; now I’m coming in third season on Big Sky. I’m just like, OK, here we go again. It’s like the new kid at school. But everybody was very welcoming. Everybody was very gracious, and yeah, they gave me a character I thought filled maybe a little bit of a void in what we were seeing in the show. I just tried to hit those notes and bring a little levity to what is essentially a pretty grim basis for a show, which is just murder mystery constantly. But it’s good to layer in some of the lighter moments. I think it just gives the show and the storyline some complexity that makes it makes it more entertaining.

At the beginning of the season, you joked with Elwood Reid about when you would go all Liam Neeson, and you certainly got to do that in these last two episodes with Avery (Henry Ian Cusick), Sunny, and Buck to save Emily.

Yeah, I feel like that might have been a little prophetic for me. [Laughs] I think I said it, and I willed it to happen, and Elwood was like, “look, man, it was your fault; you said it.” I was happy with the way it ended up. I kind of figured that that was where we were going, and I was looking forward to getting to show a different side of Beau and get to play that less happy-go-lucky, good ol’ boy and more of just a father in absolute misery and fury.

At the end of the season, Beau is kind of torn between moving back to Houston with Emily and Carla (Angelique Cabral) and facing his ghosts there and maybe staying and looking forward. Do you think he has any idea what he wants to do?

I don’t know. The show leaves Beau, I think, in a real contemplative state. I think that he has a strong desire to reconnect with his ex-wife. I think he still does love her. Obviously, he wants to be in as close proximity to his daughter as possible. That’s very enticing for reconnecting with his ex-wife as well. But then, at the same time, does that just lead to the same place that ended up breaking them up in the first place? And is this new role and a new place with new faces and new friends a fresh start for him that he needs to kind of move past what he was coming from in Houston? I think it sets up those questions in a great way. Whether or not we’ll answer them that’s not up to me. How does Beau feel about Jenny? I kept expecting something to happen in that final scene…

Yeah. In my opinion, that’s just good TV. Leave the audience wanting more is something that I’ve heard many, many times, and I think it’s just a formula that works. And I think we gave just a little bit of what some of the audience was hoping for. There was a moment there, and there was a connection there, and there were clearly sparks. But do we need to play it out in a graphic sex scene? I don’t know. That’s for the streamers. We’re still doing broadcast TV here, still trying to keep it a little friendly.

Kisses do tend to happen in finales…

Let me ask you this, would it have been even worse had we started leaning towards the kiss and they cut the credits?

Probably, right? [Laughs] Or would you have rather seen, like, boom, kiss, and the bedroom door flies open, and we’re just hungrily attacking each other, and we fall onto the bed, boom credits?

I was expecting to be left with the question of whether they would even go further than a kiss and cross that line.

Yeah, absolutely. I think that was that moment. A kiss wasn’t necessarily needed for the moment of, “OK, the walls have just come down. The lines are certainly being crossed, but let’s not jump across the line. Let’s tiptoe for now until we figure out what this is.” I thought that was a nice way of doing it in a way that wasn’t scratching that itch that everybody wanted to scratch so much, you know what I mean? I appreciated it, but I could also see why people were like, “Oh, come on, give us the goods.”

Is he ready to open up to Jenny about his ghosts? He says after a few more beers, but that’s different from being ready.

That was just like; I’m not ready yet. I’ve got to warm up to that. As I would know, a way for a Texas guy to say that is, “well, I’m gonna need a few more beers before I get into all that,” which is just, “I need to be a little bit more comfortable. I need to know how I’m gonna phrase it, how I’m gonna say it. Because you start to think about how you’re gonna react and how I’m gonna feel, and do I really want to open up that Pandora’s box with this person who I work with on a daily basis? I’m gonna have to see her on Monday. Is this something that now it’s gonna be awkward?” So there’s, I think, a lot of questions in that moment, which fired it up in a way that that made it not so sexual. It made it like two humans really, truly connecting. It wasn’t just like, oh, let’s rip each other’s clothes off. It’s like, oh, let’s strip away the walls that we’ve been hiding behind all season, and let’s maybe get to an emotional point here with each other that could certainly then lead to intimacy. 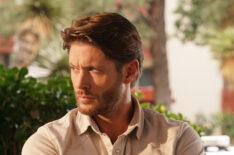 Would Jensen Ackles Return for a 'Big Sky' Season 4?

Katheryn and I talked about it. We talked about that a lot more than I think normal. She and I usually come in guns blazing, we’re ready to go, and we can hit those script notes and do our job. But this scene took a little bit more kind of ironing out just from the emotional standpoint where we wanted to land and how we wanted it to go from A to B and B to C. And I thought it was a deeper, richer way of going about it in the fact that it was less just, oh, here’s two adults that are attracted to each other, and so let’s start making out and head of the bedroom, and more about, this is a friend who clearly there’s chemistry there, and she wants to know about my backstory. Maybe it’s now time to drop those walls down and start opening up to this person — which we know when you do that, that just leads to more things. So I think had there been 15 more minutes of the episode, we probably would’ve seen Beau leaving the next morning.

Talk about filming the Beau-Buck fight.

Yeah. I kind of knew that was coming down [the] pipe, and Elwood had mentioned that this was gonna roll out. I was really excited because I’m just such a huge fan of Rex. And I told him that the first day. He showed up with Reba, and everybody was like, oh, Reba, Reba, Reba. And I just ran right up to Rex. I was like, “dude, I watched so many of your movies. I grew up watching you. I’m such a fan.”

He and I are both were both born and raised in Texas, and we just got along really well. And so, to get to work with him in that capacity, I was tickled. It was a lot of fun. He’s such a great performer and scene partner and just a good guy all around, not just working with him on camera. Just throw a football with him, just hang out with him, drink a beer with him. He’s that kind of guy. So to get to do that kind of work with somebody like that just made it all that much more fulfilling and fun and exciting.

I liked the nods to Supernatural this season, especially Beau giving Cassie salt for her new house, so she’s protected — “from demons,” as she remarks.

I can’t remember if that was in the script because it was so long ago. I think it was an ad lib — because I did a few different versions of that. That was one thing that they kind of encouraged me to do was do one scripted, and then if I’ve got some ideas, I can ad-lib some stuff. Not changing the script, but just changing a word here like that, for instance, I’ll just throw it in. It’s not gonna change the scene at all. It’s not gonna change the moment. It’s not gonna change anybody else’s dialogue, but it just kind of keeps it fresh. I got to do that quite a bit this season, which is a lot of fun. And I think that that was just an ad-lib that I think that I threw out there. [Laughs]