After a two-year hiatus, Perry Mason is finally on its way back to the screen. HBO shared a photo from the set of the show on October 20, sharing Perry Mason Season 2 premiere info while it was at it.

Perry Mason Season 2 will come out in February 2023, HBO’s tweet revealed. It also came with the teaser caption, “Back on the case.” Matthew Rhys (The Americans) stars as the titular detective turned defense attorney in the crime drama, a reboot of the 1957 series. Season 1 also starred Tatiana Maslany (She-Hulk: Attorney at Law), John Lithgow (The Old Man, The Crown), Chris Chalk (Shining Girls) and more.

Back on the case.#PerryMason Season 2 premieres this February on @hbomax. #HBO50 pic.twitter.com/YaL9Oqa1Q6

Perry Mason is based on the book series of the same name. Season 1 premiered on June 20, 2020, and was renewed for Season 2 weeks later after only five episodes had aired. As announced in April 2021, Maslany won’t be returning for Season 2, but the HBO drama announced a slew of new cast members in January 2022 — the last update fans got on the show. 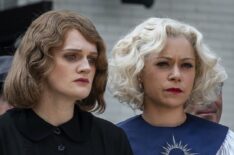 Astin will play Sunny Gryce, a new client of Perry and Della’s (Juliet Rylance). He’s teased as the embodiment of the American Dream and a force to be reckoned with on the battlefield of the town’s dueling supermarkets. Dewey will play Brooks McCutcheon, the heir of LA’s wealthiest oil family who fears he’s not as talented as his father, Lyell McCutcheon, played by Raci. Tullock will portray successful, stylish, confident, self-made screenwriter Anita St. Pierre.

As previously announced, the season will pick up three months after the events of Season 1’s finale. As the Great Depression bulldozes America, Perry and his firm will seek justice for their clients when a seemingly easy case takes over Los Angeles.