Kyle Larson had a dominant 2021 season that saw him win 10 races — the most since Jimmie Johnson won 10 in 2007 — and put the icing on the cake with a Championship 4 win at Phoenix and his first NASCAR Cup Series title.

Here’s a peek at the biggest changes in store as Larson and his cohorts start their engines for 2022: Clash at the Coliseum

The Clash, a non-points race traditionally held at Daytona, is run February 6 (Fox) on a 0.25-mile temporary asphalt oval in the Los Angeles Memorial Coliseum. The Busch Light Clash at The Coliseum will be the first NASCAR race held in a stadium used by the NFL since Chicago’s Soldier Field hosted one in 1956.

Action at Daytona begins with the Bluegreen Vacations Duels (February 17, FS1) and the famed Daytona 500 (February 20, Fox), but the road race at Daytona is off the schedule. The Cup Series returns to Auto Club Speedway in Fontana, California, February 27 (Fox) after a pandemic-caused hiatus. The Food City Dirt Race at Bristol (April 17, Fox) is the first NASCAR race on Easter since 1989. World Wide Technology Raceway near St. Louis makes its Cup Series debut on June 5.

Chip Ganassi Racing sold its NASCAR operations to Trackhouse Racing, owned by Justin Marks and recording artist Pitbull. Trackhouse fields a two-Chevy team with Ross Chastain in the No. 1 and Daniel Suarez in the No. 99.

23XI Racing, owned by Michael Jordan and Denny Hamlin, brings in a new teammate for Bubba Wallace with Kurt Busch driving the No. 45 Toyota.

Fox and FS1 split coverage of the first half of the season, with NBC and USA Network taking over the second half and playoffs. Jeff Gordon leaves the Fox broadcast booth for a high-level role with Hendrick Motorsports. All times Eastern. Schedules are subject to change. 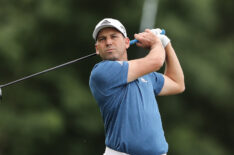