[Warning: The below contains MAJOR spoilers for the Bull Season 6 premiere “Gone.”]

Going into the Bull premiere, we knew two things would happen: Benny’s (Freddy Rodriguez, not returning for Season 6) absence would be explained, and Jason (Michael Weatherly) and Izzy’s (Yara Martinez) daughter would be kidnapped.

But before we — and the CBS drama — get into that, TAC kicks off the season by celebrating a win (after Jason bluffs!) with a little karaoke. And anytime Bull can get its cast singing, especially Christopher Jackson (Hamilton), we have to count it as a win.

There really is no way to just casually slip into the conversation in this episode where Benny is, but they sort of accomplish that when Chunk (Jackson) says he wishes Benny could be at the karaoke bar with them. “Benny is blissfully happy in Rome singing ‘Mi amore’ to his Italian bride,” Izzy says. Yes, Benny got married, to a woman he only knew a month.

What Happened to Astrid?

The fun of the night comes to an abrupt and horrifying end when Jason and Izzy arrive home to find the babysitter duct-taped in the nursery and Astrid gone. The kidnapper calls a phone he left in the crib: “If you ever want to see your daughter again, you’ll pay $1 million by 7 a.m. … If you don’t pay every penny, your daughter dies. If you call the police, she’s dead. Don’t test me.”

Jason takes that threat very seriously, and the team quickly gets to work to try to figure out who took their boss’ daughter. Marissa (Geneva Carr), meanwhile, handles securing the money for the ransom in a way that doesn’t raise any red flags. “What if this isn’t about the money? Why us? There’s so many families in NY that would drop $10 or 20 million without even breaking a sweat. Why us? I’ve made a lot of enemies since I started TAC,” Jason realizes. Danny (Jaime Lee Kirchner) sends them footage of the kidnapper, who posed as the food delivery guy, but Izzy can’t recognize him with the cap and mask. It’s downright heartbreaking when Taylor (MacKenzie Meehan) voices what no mother wants to hear: he carried Astrid out in his bag.

The babysitter ends up revealing the clue Jason needs to identify the kidnapper: He told her to tell “Dr. Jason” to answer his call. That’s what he had the teens — tough cases, he tells Marissa, kids with severe psychiatric disorders — he worked with in a juvenile clinic before TAC call him. The kidnapper is likely one of them.

TAC begins going through the possibilities. Dmitri took a bat to Jason’s car but moved back to Russia five years ago. Simon’s mom brought him in for depression and obsessing over revenge fantasies against his bullies. He bought a knife he wanted to use, and Jason called the authorities. When Simon pulled the knife on the police, he was arrested and sent to jail … where he died over the summer. Meanwhile, Danny’s finding footage from every camera in the area (and even smashing through glass doors to get one). It pays off: She finds footage of the kidnapper’s car and they see that someone’s driving. There are two kidnappers.

When it comes time to make the ransom drop, the kidnapper will only give Jason, who refuses to let Izzy go with him, instructions once he’s on the road. Danny follows as Jason’s directed to a storage facility and into a unit. “It’s hell when someone takes your child from you, isn’t it?” the kidnapper says. Jason is told to answer the other phone in the storage unit, and before he does, he says “think of the mother.”

Marissa thinks that’s a message to them, not the kidnapper about Izzy. Since Jason had to leave behind all their trackers when he was told to change clothes and switched to a phone they didn’t have access to, it’s all they have to go on as he moves to the next location. They realize he meant Simon’s mother, Sheryl (Jenny Bacon), who checked him for treatment. She blames Jason for the loss of her child, so she took his. Her other son, Tristen (Mark Taudevin), matches the physical profile of the delivery guy. But they live in a huge apartment complex, and there would be too many eyes on them if they took Astrid there. Do Jason & Astrid Both Survive?

The final destination is a warehouse, and inside, Jason hands over the money. While Sheryl has her gun on him, Tristen brings him Astrid and even bends to pick up the stuffed bunny she drops. But what Tristen doesn’t know is his mom doesn’t plan to let Jason leave. She doesn’t think Jason remembers her (he does) and wants him to lose his child like she did hers. But Tristen steps between them, because she’d told him no one would get hurt. Jason convinces Sheryl to let Tristen take Astrid and leave her at a fire station with a note for Izzy. But after she does, she puts her gun to Jason’s head.

Fortunately, Taylor traces the stolen vehicle Tristen and Sheryl used to that warehouse, and Danny sneaks in as Jason tries to talk Simon’s mom down. “Simon was a good person,” Sheryl insists. “You should have let me handle it. You didn’t have to call the police.” He talks about a memory Simon shared with him and the book Sheryl used to read him every night. 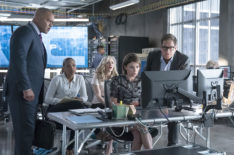 While Danny does reveal herself and has her gun on Sheryl, Jason continues to try to use words to defuse the situation. His wife told him she’d never forgive herself if she didn’t do everything possible to save her daughter, and that’s what Sheryl’s doing now, trying to do everything she can to avenge her son, Jason says. But Simon knew how much she loved him. “You don’t have anything left to prove.” It works, and Sheryl drops the gun.

And so the tension-filled episode ends with Jason and Izzy home, with Astrid in bed with them. But how is this going to affect the parents going forward?