From the very beginning, it was clear that Laoghaire (Nell Hudson) had her sights set on Jamie (Sam Heughan), and even after he married Claire (Caitriona Balfe), that didn’t stop her from pursuing him. Ultimately she got what she desired when they married in Claire’s 20-year absence, but even then things were never perfect for the pair. Needless to say, it doesn’t negate the fact that they’re probably one of the worst pairings in the series because of Laoghaire’s vicious behavior towards Claire.

Perhaps their marriage wasn’t perfect, but the affection that Lord John (David Berry) and Isobel (Tanya Reynolds) had for each other was undeniable. And in the brief time they spent together before her death they were happy enough, but his guilt for not being able to love her fully makes their relationship less ideal compared to others.

Black Jack Randall’s (Tobias Menzies) brother Alex (Laurence Dobiesz) had a much kinder heart than him and easily fell for Mary (Rosie Day) during the show’s second season. Sadly, their relationship didn’t last long, as Alex succumbed to illness not long after he requested that Mary wed Jack in order to protect her and their unborn child following his death.

Before Claire was sucked through the stones at Craigh na Dun, she celebrated her marriage with Frank (Tobias Menzies) on a trip to Scotland. Things seemed good in the beginning, and although they made their situation work when Claire returned to her own time, there was always an underlying tension that surfaced on occasion.

Although Murtagh (Duncan Lacroix) held a flame for Jocasta’s (Maria Doyle Kennedy) sister Ellen in their youth, their reunion in North Carolina saw sparks fly. Surprisingly the connection appears to be good for both of them, especially the usually grouchy Murtagh.

When you think of this couple you can’t help but think of family loyalty. Between Ian (Steven Cree) and Jenny’s (Laura Donnelly) selflessness in helping Jamie when he was in hiding to protecting him upon Claire’s return to the past, their devotion to each other and the loved ones around them is palpable through the screen.

This young duo shares a headstrong attitude when it comes to pursuing what they want, and in Season 3 it was each other. Eventually Jamie and Claire gave their blessing to the Marsali (Lauren Lyle) and Fergus (Cesar Domboy), and they’re a picture of domesticity when we last saw them in Season 4.

These time-traveling lovers have had their ups and downs over the seasons, but by the end of Season 4 their relationship is restored when Roger (Richard Rankin) decides to return to Bree (Sophie Skelton) and her new baby (which may or may not be his after she was raped by Stephen Bonnet). Taking a cue from the OG couple, Bree and Roger prove their love can stand the test of time.

There’s no doubt that highlander Jamie and Sassenach Claire were made for each other, and they continue to show fans with each passing season. Despite years of separation through time, their reunion in Season 3 has only validated what viewers knew already — together or apart, no couple matters more than this pair.

Editor's Note: The original version of this gallery included the onscreen pairing of the characters Jamie and Geneva, which was completely inappropriate and not in standing with TV Insider's belief system. It has been removed, and we apologize to anyone who found this slide offensive. We hope you can continue to celebrate Outlander with TV Insider in the future.

Outlander is known for telling the epic love story of 20th-century born Claire (Caitriona Balfe) and 18th-century highlander Jamie (Sam Heughan), but they aren't the only couple featured in the Starz series.

Throughout the show's four seasons, there have been more than a few pairings that have caught viewers' attention. Whether its Claire and Jamie's daughter Brianna (Sophie Skelton) and her love for historian and intellectual Roger (Richard Rankin) or the surprising connection between Murtagh (Duncan Lacroix) and Jocasta (Maria Doyle Kennedy), there's a couple for anyone to root for. 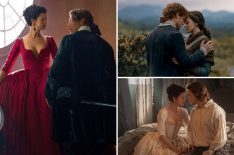 Then there are some you don't want to root for, and we're rounding nine different matches up in a ranking from worst to best Outlander couples. Click through the gallery above to see which couples top the list and which fall short.