‘Bridgerton’: 7 Burning Questions We Have for Season 2

Season 1 of Bridgerton ended with some scandalous, sweet, and shocking surprises. Daphne (Phoebe Dynevor) and the Duke of Hastings (Regé-Jean Page) welcomed their first son into the world, Lord Featherington (Ben Miller) was found dead, and Lady Whistledown (voiced by Julie Andrews) was revealed (to viewers). With the new season dropping on March 25, fans can expect new romances, drama, and excitement.

We know the new episodes will follow the eldest Bridgerton, Anthony (Johnathan Bailey) as he embarks on his journey in finding a wife. On his search, he meets two sisters who just arrived from India, Kate Sharma (Simone Ashley), and her younger sister Edwina (Charitha Chandran). A complicating romance sparks between Kate and Anthony and will unfold throughout the season. On the other side of town, the Featheringtons are expecting a new heir, while Penelope (Nicola Coughlan) continues to secretly spread the word of Lady Whistledown. 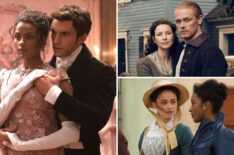 With that in mind and more, scroll down as we take a look at our burning questions for when we return to the ton.