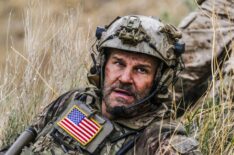 Taking SEAL Team Off CBS Is Unfair to Veterans

Comment: I am a senior and a Vietnam veteran. The last episode of SEAL Team on CBS was very emotional and touching for me and I am sure for other veterans. I am severely disappointed about SEAL Team’s renewal only being on Paramount+ starting after a few episodes next season. Moving this series to streaming only means reducing the access to many seniors and veterans. I realize that I could add streaming, but as you know some of us are on a fixed income, are not as tech-savvy and we are not as important for TV/streaming ratings. The continuing disregard to our seniors in these TV/streaming issues is sad. — Bill, Strongsville, Ohio

Matt Roush: You’re not alone. This particular decision, amid the ongoing migration of more “bubble” shows to streaming, seems to be the most disheartening to fans, especially considering that SEAL Team fits so solidly in CBS’s programming wheelhouse and what it means to veterans such as Bill. As we’ll discuss in the next section, if it came down to cancelling the show or giving it this streaming lifeline, maybe this was the only solution, as regrettable as it for those who won’t, or can’t, adopt the streaming platform. Taking a longer view, I’m hoping that once the next season of SEAL Team finishes its exclusive run on Paramount+, these episodes will eventually go out wider — either on CBS during the off-season (why not?), or in syndication. One of the driving forces of giving SEAL Team a fifth season was to reach the threshold of episodes that would make it more appealing to syndication and cable. So one way or another, I’m hoping the show’s fans will get to see these episodes, even if it entails a wait. When Streaming Is a Last Resort

Comment: I understand the frustration of people who are mad because a show is moving to streaming after existing on a network. My primary concern is Zoey’s Extraordinary Playlist, which may or may not end up moving from NBC to Peacock. Would I rather the ratings were big enough for it to stay on the network? Yes. Am I thrilled about the idea of having to pay for another streamer to access new episodes? Nope. But would I do it? Absolutely. The point being: It’s better to have it renewed and deal with the headache of watching them in a less ideal way as opposed to having it canceled. If CBS had actually canceled SEAL Team or Evil, you’d get an earful about that in your mailbox from those fans. And if NBC does the unthinkable and decides to pull the plug altogether on Zoey, I’m going to be really upset. Given all of the complaints about cancellations you’ve been fielding, this might not be a very popular sentiment. — Jake

Matt Roush: But it’s where we are, and it’s probably only going to become more of a trend in years to come. (And it’s giving fans so much more incentive to lobby the streamers any time a show is canceled without these deals falling instantly into place.) Ask Matt: The Ups and Downs of Season-Ending Cliffhangers

The Future of Broadcast

Question: It seems like the networks are unloading many of their lower-rated programs (SEAL Team, Evil, possibly Clarice and more to come) to streaming services. Do you feel it’s a foregone conclusion that broadcast TV will eventually be dedicated just for less expensive unscripted programming and of course sports and live shows? For instance, ABC and NBC just dedicated three full hours of live performances on American Idol and the Billboards Award show respectively. Next season Fox has NFL on Thursday and WWE on Friday and college sports on Saturday, plus late afternoon and early evening NFL games on Sunday. — Fred

Matt Roush: I doubt we’ll ever get to the point — or at least not in the foreseeable future — where the legacy networks give up on scripted shows altogether. But the encroachment of lower-cost reality programming, game shows, and other alternative programming will likely increase. We’re already seeing it on Fox, which is no longer attached to a studio and is leaning on sports and high-concept stunts like The Masked Singer and its offshoots to fill much of the lineup. (The reduced shelf space is one likely reason Prodigal Son isn’t returning.) Sports will continue to be a draw for live viewing, but events like awards shows have lost much of their luster during the pandemic, making it hard to gauge what the next step will be for the broadcasters as more and more consumers flock to streaming and cut the cord. Can't Miss Episode of the Week: 'Zoey's Extraordinary Playlist' and That Twist Ending

Getting the Green Light

Question: Project Greenlight was one of our favorite shows on HBO. Is it true that it is coming back? And if so, will it be on HBO or just on HBO Max? I have both since I am an HBO subscriber but just wondered for my extended family, who live in the boonies with no reliable Internet (till Elon gets it going). — Jennie C

Matt Roush: When the revival of this terrific behind-the-camera series was announced, with Insecure’s Issa Rae as the new executive producer and mentor to aspiring female filmmakers, it was designated for HBO Max. The finished film will also be an HBO Max exclusive. I can see why they feel Project Greenlight may work better in this format than as a weekly linear program. But here’s hoping high-speed Internet becomes more available to everyone. Question: What’s going on with Clarice? I want to like it, but it’s off more than it’s on, so getting any continuity with the storyline is really difficult. Plus Kal Penn has disappeared which is disappointing also! Other shows that premiered in the time of Covid are doing much better with their scheduling. – Christine

Matt Roush: CBS really did this new series no favors with the scheduling. I don’t know whether Covid restrictions had anything to do with all of the stops and starts, but with only four new episodes appearing in all of April and May, even a fan could be excused for forgetting about it. Clarice is darker and more serialized than most CBS crime dramas, and despite its pop-culture pedigree from The Silence of the Lambs, was likely to be a tough sell to this network’s core audience. For all of those reasons, CBS deserves to take some knocks for how they handled this, regardless of whether it ends up moving to streaming next season (if there is one). On the upside, when Clarice returns with new episodes next week (June 3), the final four episodes are currently scheduled to air without interruption. I’ll be there. Question: What’s with the show Chad? I knew the first time I saw a promo that Chad was a girl. It’s not even about a transgender kid. Why would any network put out a show with a grown woman playing an adolescent boy? Please explain. — Susan

Matt Roush: Either you buy Nasim Pedrad’s performance as the most cringe-inducingly awkward teen in recent TV history or you don’t. (I’m guessing you don’t.) For the former Saturday Night Live star, who created the series, it’s a deeply personal look back at when she was an immigrant kid who never felt she fit in. She’s not trying to convince you she’s a 14-year-old boy, but she’s channeling all the feels as she interacts with actors who are more age-appropriate. TBS was apparently impressed enough to give Chad a second season. Question: Will anyone ever show the final season of Ray Donovan that was planned but not filmed? — RC

Matt Roush: There won’t be an eighth and final season, but after canceling the series so abruptly, Showtime committed to a Ray Donovan feature-length film that will give fans some closure, while also looking back at the origin story of Ray (Liev Schreiber) and his wayward dad, Mickey (Jon Voight). That’s all for now. We can’t do this without your participation, so please keep sending questions and comments about TV to [email protected] or shoot me a line on Twitter (@TVGMMattRoush), and you can also submit questions via the handy form below. (Please include a first name with your question.) Have a great Memorial Day weekend, and we’ll answer more questions next Friday.

Project Greenlight where to stream