Looking to fill the void left by HBO’s The Undoing? Don’t worry, the network has you covered. Its latest crime drama, Mare of Easttown, which premieres April 18, promises plenty of twists and turns with an all-star cast to boot.

In a newly released first look trailer, Kate Winslet is Mare Sheehan, a hometown fixture living in the shadow of her high school glory days as a basketball champ. Now a beleaguered detective struggling to please the locals, Mare does her best to balance her family life and the cases plaguing her mind. 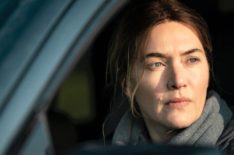 Get ready for your next scripted murder obsession.

Created by Brad Ingelsby with all seven episodes directed by Craig Zobel, Mare of Easttown is a limited series that takes a look at the dark side of Mare’s Pennsylvania community. Along with the investigations she’s pursuing, Mare is also coming to grips with a devastating tragedy of her own. Get a taste of the chaotic web this series spins in the thrilling trailer below, and make sure to catch Mare of Easttown when it debuts on HBO this April.