‘The Walking Dead: World Beyond’: The Truth Won’t Set You Free (RECAP)

In the spinoff series’ first episode, Huck (Annet Mahendru) hinted at having a tragic backstory. Well, that’s explored in full force in “Truth or Dare,” and it’s every bit as upsetting as you might’ve imagined.

In the present, the group — plus Huck, who comes back in the opening minutes — celebrates after making a huge discovery in regards to CRM and where Hope (Alexa Mansour) and Iris’ (Aliyah Royale) father is stationed. That said, not everyone’s happy that newcomers Tony (Scott Adsit) and Percy (Ted Sutherland) have joined the crew on a permanent basis, and that discontent leads to a jaw-dropping conclusion that completely reframes one of the show’s central characters. Let’s break it down. The CRM breakthrough comes courtesy of solving the coded maps, which allows the group to see the locations of not only CRM oil stations, but also the exact location of a DNA strand on the New York map Lt. Col. Kublek (Julia Ormond) gave the sisters. They now know exactly where to go to find their dad, and how to get enough fuel to get there.

That’s cause for joy for most, as the group celebrates, with the exception of a not-quite-right Huck. Felix (Nico Totorella) and Tony share some booze on the roof and reflect on their duties to the kids, during which Tony says some horribly foreshadowing words about Percy: “I’d give my life for his.” Come on, dude! Don’t say that. Them’s the kind of words that get you killed on Walking Dead shows.

Meanwhile, upstairs, the teens play a game of Truth or Dare. Percy’s a little mean to Iris when she says the thing she most wants (of course she picks “truth”) is to see the Louvre — he mimics sleeping and tells her he thought she’d say something more exciting (ouch) — but the real agony comes when he asks Hope (again, “truth”) to say the worst thing she’s ever done. She spins a story about spiking the teachers’ coffee with laxatives at the Campus Colony, but Percy sees right through her and demands, as she chose, the truth. Drunk and visibly upset, she storms away only to have the person involved with the real worst thing she’s ever done go running after her: Elton (Nicolas Cantu). The poor guy gives her a hug in an attempt to make her feel better, but she says she just needs to be alone.

Hope heads up to the roof, where she comes face-to-face with an equally morose Huck. She’s up there to reflect on her time in the Marines. That’s her tragic backstory: she ended up killing her whole team, including the guy she seemingly was in a relationship with, to protect a group of innocent civilians. Their orders were to kill everyone, living or dead, in the area, and she just couldn’t let her fellow soldiers fire on a group of defenseless people who’d done nothing wrong. Fun fact: the scar on her face is self-inflicted, and she cut herself there to mimic the scar of her boyfriend(?), who she killed.

Anyway, it’s at that moment that Huck gives some controversial advice. She tells Hope not to tell Elton about what she did. “Isn’t that letting him live a lie?” Hope asks, and Huck counters that it’s not a lie if Elton doesn’t know there’s a truth to be found. Basically, it’s kind of this show’s version of The 100’s “I bear it, so they don’t have to” thing.

The whole squad heads to the CRM oil storage facility, where Hope and Huck run into some serious trouble. There’s a guy there who’s maybe three-quarters of the way into becoming a walker from a bite wound on his leg, and he holds a gun on Hope. He thinks they’re CRM, and he’s got no love in his heart for the helicopter people. Huck manages to de-escalate the situation and lies to the guy, saying she can save him. Once the gun is down and Hope is safe, she shoots him, and that’s that. 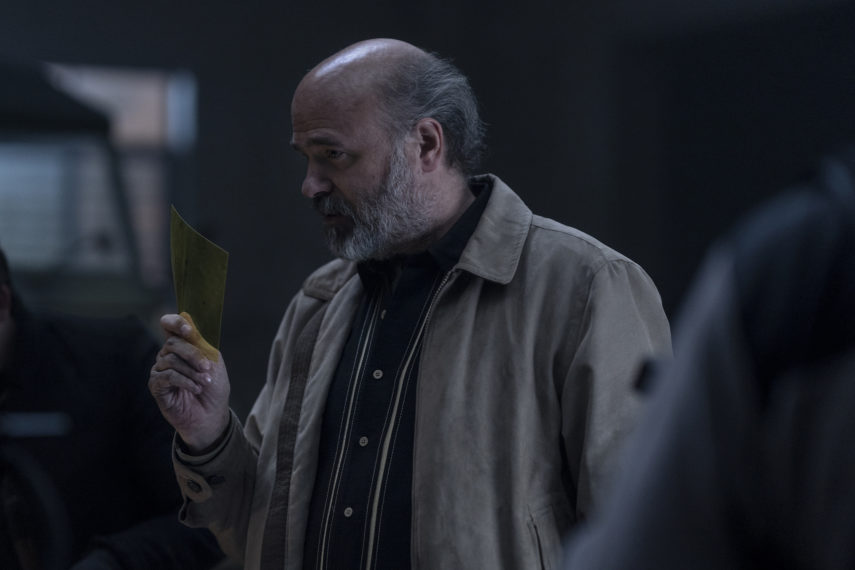 A Villain in the Group?

They get the fuel they need and head to a cute lakefront house, where some seriously horrific s**t goes down. Percy tries to flirt with Iris in the way that only an awkward teenage boy can, asking her to meet him “out by the truck” later that night. She doesn’t understand why he’s being so weird, but she agrees. Silas (Hal Cumpston) looks on, obviously displeased with this development. When Iris goes to meet Percy, she discovers he’s turned the bed of the truck into a makeshift Louvre by cutting pictures of paintings out of books and hanging them all around the space, as well as arranging candles throughout. It’s incredibly sweet, but Percy’s nowhere to be found.

Iris heads back inside to find him, but instead, she finds Tony’s body — he’s had his head smashed in. The whole group assembles, and they discover who appears to have done it: Silas, who’s chillin’ in the corner of the room with bloody knuckles, a half-drunk bottle of beer and a frightening emptiness in his eyes. Yikes. Was the “madman across the water” Silas the whole time?! « EPISODE 6
Shadow Puppets
EPISODE 8 »
The Sky is a Graveyard