Girls get it done — am I right?

Amazon Prime Video’s edgy superhero drama, The Boys, is tackling an even wider array of issues and topics for its sophomore season, from nazism to the way media portrays female characters. The last few episodes of the comic-based series have seen the series’ female heroes struggling under the Vought magnifying glass. Starlight/Annie January (Erin Moriarty), and her teammates, like Queen Maeve (Dominique McElligott), are put through agonizing press days where they’re asked silly questions about movies that give their “characters” a two-dimensional viewpoint.

Fortunately, the series itself, created by Eric Kripke (Supernatural), appears to be the complete opposite, with fully fleshed-out, troubled, but strong women — though they did ask their female stars to participate in, ironically, a “Girls Get It Done” press day, as we see in the show. So, TV Insider went right to the source: What do The Boys‘ stars think of the series’ depiction of female characters?

“I think it really depicts women, not as these perfect heroines, but it tackles all of the difficult situations that women face in real life and how they deal with it on their own terms,” notes Karen Fukuhara, who plays The Boys’ silent but powerful ally Kimiko Miyoshi. “What’s great is that every character, not just the girls, are flawed in our show. People like me, as just as a genuine fan and a viewer, can connect with these characters because we see ourselves in them.” Homelander and Starlight in The Boys (Amazon Prime Video)

And the best part is the fact that the series’ ladies are definitely quite flawed. Moriarty agrees: “You have these women who are unambiguously strong, and are empowered and more and more empowered in finding themselves, but they make mistakes. There is no perfect human … Annie has one of the most intact moral compasses I’ve ever encountered, and she still makes mistakes.” 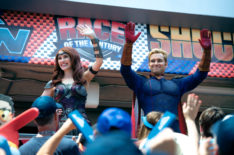 Check out the full video interview above for more intel on Starlight and Kimiko, and stay tuned for more The Boys interviews to come!