The 2020 MTV Video Music Awards may have been a little different this year due to COVID-19, but the performances weren’t any less amazing with social distancing guidelines in place.

Whether it was The Weeknd’s blinding opening or Miley’s first live rendition of “Midnight Sky,” we’re rounding up some of the night’s best performances (stay tuned for more additions as the evening carries on). Taylor Swift, the Jonas Brothers, and Video Vanguard recipient Missy Elliott and more were among the night's highlights. 'He's a true hero, not just on screen, but in everything he did,' host Keke Palmer said. 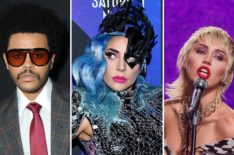 See the full lineup of artists participating in the ceremony.

Julia Michaels and JP Saxe sing “If the World Was Ending” Some performances from the annual event were taped ahead of time.