The 2020 MTV Video Music Awards took place “live” on Sunday, August 30, but it soon became clear that much of the event — from performances to award presentations — was pre-taped in advance. That mix of live and prepared production makes sense considering COVID-19 restrictions, and though the network advertised that artists would appear in New York City, some of them didn’t quite make it there.

And even the moments filmed in NYC didn’t actually take place Sunday night. Days before the event, fireworks shook the boroughs as MTV staged various VMA numbers. The noise sparked major questions until the ceremony unveiled the source of the sounds was The Weeknd and CNCO’s outdoor performances.

That certainly indicates that at least two of the evening’s major performances were pretaped. According to Page Six, there were various other factors that dictated the ceremony’s early tapings. The show utilized green screens for much of the evening, so it’s not surprising to learn that MTV even allowed some artists to participate remotely and not from the Manhattan setting. According to Page Six, Lady Gaga, Miley Cyrus, Ariana Grande and Doja Cat weren’t on location in New York City. 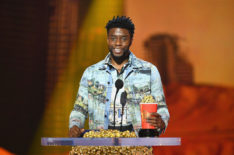 Any artists that did make the trek to the East Coast were forced to quarantine days before their performances and were tested on multiple occasions before taking the stage. This pre-taping also applied to presenters as Bella Hadid was among the talents who filmed her segment for the show ahead of time.

So, while the show may not be entirely live or filmed in NYC, there’s no denying MTV pulled off the near-impossible by putting on an awards show in the middle of a pandemic.