[Warning: The below contains MAJOR spoilers for the first season of Teenage Bounty Hunters.]

Following 16-year-old fraternal twin sisters Sterling (Maddie Phillips) and Blair (Anjelica Bette Fellini), the series kicks off with a chance encounter between the sisters and bounty hunter Bowser Jenkins (Kadeem Hardison). After convincing him to let them tag along on his jobs, the girls are taken on a wild adventure as they also attempt to balance their social lives, relationships and the overall challenges that are synonymous with being a teenager. 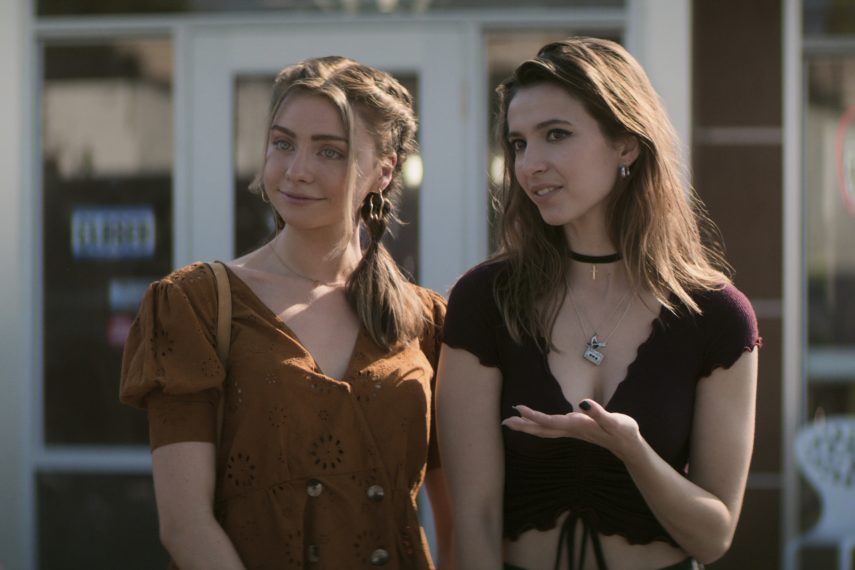 The season takes an unexpected turn for the private school darlings when their conservative parents become part of the criminal fray. While all signs point to their mother Debbie’s (Virginia Williams) guilt in a string of past crimes, but a twist end reveals that it was their aunt Dana — Debbie’s twin — who was guilty. As if the shock of learning they had an aunt wasn’t enough, the truth about Sterling and Blair’s relationship is also unveiled as Dana reveals herself to be Sterling’s actual mother.

Below, Anjelica Bette Fellini breaks down that shocking finale, shares her hopes for Season 2 and opens up about her bond with the cast.

What drew you to the role of Blair?

Anjelica Bette Fellini: Definitely female empowerment. The breakdown for Blair when I got the audition said, “Blair is her own sexual lab rat.” I just thought to myself, this is me, and I realized that I’ve never run a breakdown like that before. I think that they said it perfectly without slut shaming or acting like it was a bad thing. I’ve certainly auditioned for roles before that said “promiscuous.” So what jumped out at me was the fact that they were trying to make a show about female sexuality that in no way had a negative connotation about it. And that is so important to me. Sterling and Blair have a strong sibling bond, but do you think the ending discredited that “twin telepathy” is only applicable to twins? Did they discredit that idea?

Yeah. I think the show at its core is about sisterhood. And I think sisterhood exists in a lot of different ways. Certainly the last moment shows that. When you believe something as wholeheartedly as the girls do, they became that close and they had that power because they believed [in that bond].

Were those scenes when you and Maddie communicate”telepathically” difficult or awkward to shoot since you’re essentially talking directly at a camera?

There was nothing awkward that happened on this set, we were all just a big family. And yes, for the twin vision there’s a big camera in your face, but the other twin would stand on the side of the camera and give the twin vision performance. So even though we were looking down the barrel of the camera, we were talking to the other person. So honestly the way twin vision looks is exactly how it felt. Blair and Sterling have such a close bond — did you and costar Maddie Phillips do anything behind the scenes to build that connection?

Yeah, I mean Maddie and I just sort of had [that connection] the moment we met. That was probably one of the least hard things about this job was that I always knew my scenes with Maddie would be good. We did end up getting matching tattoos, Maddie and I and the showrunner, Kathleen Jordan. So I guess that would be a little bit of a bonding thing.

While the sisters are both involved with bounty hunting, would you say Blair is better fitted to the occupation? She seems to be into the action more. What's Coming and Going From Netflix in September 2020

Blair also grows close with Bowser over the course of the series. What was it like getting to create that father-daughter type relationship?

One of my favorite parts about building the layers of Blair is that she even says in Episode 4, “You’re the favorite child,” to Sterling. I’ve been curious to see how this will affect her emotional arc. Because at the end of the day, it’s not that Sterling was the favorite child, it’s that [their parents] were fostering to make sure that she didn’t end up like Dana. So I think that actually Blair is more wealthy in the area of love than she thinks she is. She has her parents and Bowser, but she sometimes feels alone.

So it would be interesting to explore how this information affects Blair and how she sort of settles more into the idea that she is loved. With Kadeem [Hardison] though, he is fantastic. Like my relationship with Maddie, that was one of the least hard things that I had to do to. Kadeem and I hit it off right away, and in real life he has become sort of a father figure to me. While there’s no news about a Season 2 renewal yet, things were left pretty open ended between Blair and her “ex” boyfriend Miles (Myles Evans). Do you think there’s hope for them if the show continues?

I’m not sure. I think that it’ll be interesting to see how they both are affected by the breakup and what Blair thinks she deserves. I talked to the showrunner a little bit and she says that she’s having fun wondering from her audience members and from her family, who is Team Miles and who is Team Blair in Episode 8. It is such an interesting thing that happens where Blair tries to juggle her work life balance and ends up lying. But I guess some people think that Miles is being a little harsh on her too. So I think it’s really up in the air right now.

While Teenage Bounty Hunters is a fun show to binge, are there any series you’re enjoying on TV at the moment?

For lighter taste I’ve been going with Parks and Rec. I just started that, it’s fantastic, you can’t go wrong. I did just finish I Know This Much Is True; that was incredible. And then of course, I May Destroy You. I can’t recommend that show enough. I think it’s one of the best shows I’ve ever seen in my life.

Teenage Bounty Hunters where to stream