Everything Is About to Change

[Warning: The below contains MAJOR spoilers for the series premiere of Darcey & Stacey.]

Finally, a show that’s solely Silva! The lovable twins Darcey and Stacey are back for more gambles on love with their very own spinoff series. The season premiere dives right in with secret rendezvouses and cheating allegations. Strap in for the Silva drama.

Identical 45-year-old twins Darcey and Stacey Silva have always done things in tandem. From weddings to pregnancies to divorces (they officially signed their papers on the same day), the Silva sisters are side-by-side each step of the way. So of course they share a similar taste in men.

“We tend to kind of date guys who are younger than us. We’ve dated internationally,” Darcey explains. Stacey’s ex-husband was from Serbia, while the father of Darcey’s daughters was Hungarian. “Maybe it’s the accents or just the sense of a different culture.” “We date the total opposite of what we probably should be dating, but that’s what we like and what we’re both attracted to,” Stacey echoes.

The pair currently live together in a house their father bought them in Middletown, Connecticut. The “Brady Bunch” situation has allowed Darcey and Stacey to grow even closer, especially after the struggles of the last few years. Darcey summarizes her former 90 Day Fiancé relationships with exes Jesse Meester and Tom Brooks; while she was dealing with heartbreak, Stacey found her soulmate with 25-year-old Florian Sukaj. Her now-fiancé is arriving soon from Albania on a K-1 visa.

The petite twins play tennis together and remember their high school athletic days. “We never really fit in in high school,” Stacey tells the camera. “We were kind of the underdogs. We weren’t the pretty girls.”

“The short little Bobbsey twins. They called us the trolls,” Darcey chimes in. “We were very awkward and shy and introverted. We just hung out with each other…Boys never liked us. We’re late bloomers.”

It’s hard to believe these beautiful, outgoing sisters were ever the ones on the sidelines, and yet their photos and twinge in their voices prove otherwise. Thankfully they have both found their stride in life…if not tennis. Stacey asks if Darcey has heard from recent Before the 90 Days ex Tom, but Darcey has blocked him. She’s focusing on getting in shape and using dating apps to fully forget about her former British beau.

“I’m feeling beautiful inside and out. I feel like a goddess right now, and I feel like this time I get to pick and choose what I desire and not just settle,” Darcey says in a confessional. She mentions a cute German man and a “really hot” Bulgarian guy she’s been recently talking to.

Return of the Living Tom

After tennis, Stacey secretly meets up with Darcey’s ex Tom. She claims she’s hoping to gain clarity for Darcey since he hasn’t been able to reach her for months, and the twins previously tore up the letter Tom had delivered to their home. “I just want to tell him to stop the communication because I don’t want him back in her life,” Stacey confirms to the camera.

Tom tells Stacey he wants to apologize to Darcey and hopefully Stacey can relay that. “Let her move on, let her have peace,” she responds. “Calling her fat or whatever, it’s not cool. It’s not right.” “Yeah, that was low,” Tom admits. “And the whole meeting her, I knew it was going to be like a bomb. So I was rude and obnoxious and I was unkind. I acted like a child, and I have to own that and I have to live with it and I can’t take that back.” He also claims Darcey didn’t actually love him and was still hung up on Jesse. He does tell Stacey he went to therapy and hopes Darcey will also consider seeing a counselor so she doesn’t make the same mistakes.

They end the conversation cordially, but Stacey is still unsure whether she should tell Darcey. “I think she will feel hurt and betrayed that I went behind her back.”

And because they do everything together, Darcey is also sharing some secrets of her own. Darcey turns to her father Mike for advice regarding Stacey’s fiancé Florian. Darcey mangles an onion while telling her dad some concerns about Florian’s faithfulness. 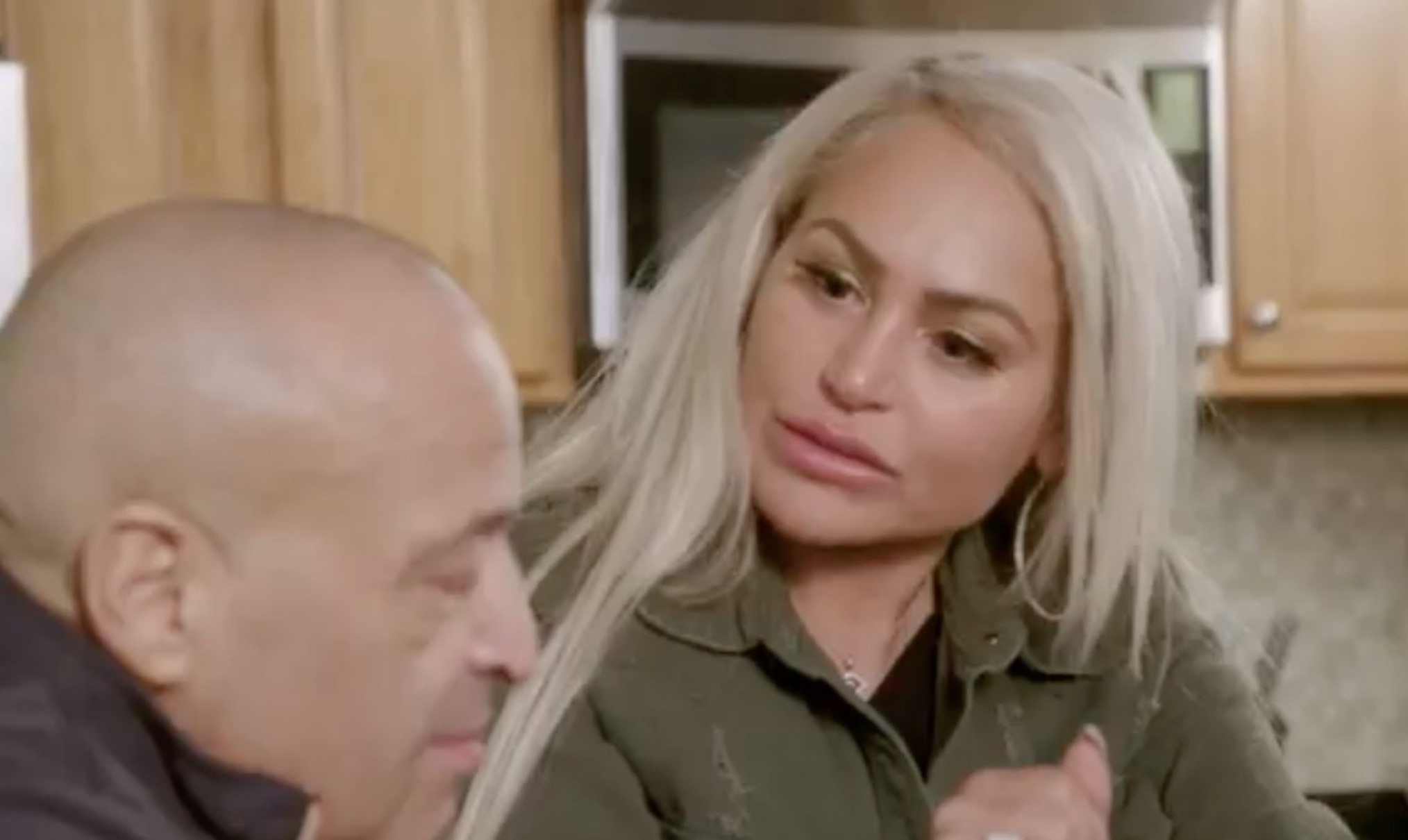 Mike meanwhile comments on the “complex” relationship between Darcey and Stacey. “The fact that they’re twins makes it complex…The older they became, the more complex it became,” he tells the camera. “They’re both loving and they’re both stubborn. Darcey is more demanding. When she doesn’t get what she wants, when she wants something, she’s very fiery.” He also hints at some competition between his daughters.

Darcey shows Mike some social media posts from Florian involving another woman. The questionable photos include a kiss on the cheek, a shirtless selfie with the mystery woman clad in lace, and multiple too-close-for-comfort poses. “There’s a little part of me that believes that Florian is using Stacey for a visa but I feel like she’s blinded by the love,” Darcey admits in a confessional. “I believe he friggin’ cheated.” “In my opinion, there’s no excuse,” Mike confirms. “When he gets here, he and I will have a private conversation and I will ask him directly what happened in those pictures. It will be him and I, man to man.”

At a family dinner with their parents Mike and Nancy, Stacey and Darcey discuss TikTok with Darcey’s two teen daughters, Aspen and Aniko. Darcey and Stacey also take the opportunity to sing and dance to their own “fun summer jam” song, “Lock Your Number.” It was released the year that Darcey and Jesse broke up, and the Silva twins call the track their own “empowerment ballad.” Mike and Nancy got divorced when Darcey and Stacey were 12, but they remain friends. Post-divorce, Mike remarried a “couple times” and currently has a fiancé in China. “We like foreign men, and he likes foreign women,” Stacey shrugs. “Maybe we get it from our dad.”

The following morning, Stacey FaceTimes Florian. She’s worried about the “rude awakening” he will be in for once he arrives in America. Florian lives with his traditional parents in Albania, and according to Stacey, he has never “lifted a finger” in his life. It does seem, however, that Florian can lift a finger to scroll right on dating apps.

“I’ve been waiting for almost five years to be together, but a few months ago, some pictures surfaced online of Florian and another woman,” Stacey recalls. “My heart dropped. I called him up right away but he told me that nothing happened, that she just kept wanting to like take pictures with him and pretend that they were a couple.” Sounds totally fine, right? Stacey confirms Florian has now blocked the woman and he promised nothing like that would happen again. “I’m just trusting and believing and having faith that what he says is true,” Stacey sighs.

Darcey later comes in to help Stacey pack for her weekend getaway in New York City with Florian. Darcey brings up the photos and warns Stacey that he could be cheating like her ex Tom did. “Darcey, everybody makes mistakes, ok?” Stacey snaps.

“Just be careful, I don’t want you to get hurt,” Darcey tells her.

While Darcey worries at home about Stacey “sugarcoating” her relationship with Florian, Stacey heads to the airport to pick up her fiancé. “Everything’s on the line for me,” Stacey hesitates. “I want to make sure within these 90 days I take enough time to get us off on the right foot so our marriage will be forever.” Darcey wonders though if Stacey is making the right decision. Stacey can only hope that Darcey’s doubts about Florian are wrong. “My dreams would be shattered if I don’t marry Florian,” she cries. “I just hope and pray everything goes well.”

We’ll have to wait until next week to see Florian arrive in the U.S., but until then, keep rocking to “Lock Your Number In”!