’90 Day Fiancé: The Other Way’: What Goes Around, Comes Around (RECAP)

[Warning: The below contains MAJOR spoilers for Season 2, Episode 10 of 90 Day Fiancé: The Other Way.]

It’s karma season for these tumultuous couples abroad. From Jihoon finally paying his dues (literally!) to Tim’s tearful apologies, it’s clear that you can’t run from your past. Ariela and her mother Janice have dinner with Biniyam’s family. They eat raw meat “mixed with butter” and practice the tradition of gursha, feeding Janice by hand. Janice asks what the role of the husband is in Ethiopia for a new father; Biniyam’s sister explains that the man usually goes to work while the wife stays at home. As a professional dancer, though, Biniyam’s job is mostly at night.

“You’re going to have a baby and you’re going to be home at night while he’s out at the club,” Janice warns Ariela. “We don’t want that to be a conflict. It’s shared responsibility.” Janice also asks Biniyam’s sisters about his ex-wife. They admit that his past is “not good,” and that even they are wary of Ariela leaving Biniyam. Ariela explains that she hopes Biniyam will apply for a visa so he can also go back and forth to the U.S. with her. Regardless, Janice says that she hopes to meet her grandson in America before Biniyam’s visa is approved. Ariela worries that leaving Ethiopia without Biniyam will resurrect some of his past fears of his ex leaving with his child.

“I feel a tremendous amount of pressure because I’m suffering some of the consequences of Biniyam’s last relationship not working out,” Ariela tells the camera. “It’s just occurring to me for the first time that [Biniyam’s family] might not trust me fully. That can be a big problem.”

Jihoon’s parents are divided over the validity of Deavan’s anger. His mother believes Deavan is overreacting to his irresponsible spending, while Jihoon’s father stresses that his son should be a providing husband.

Jihoon runs after Deavan after their strained discussion and begs her to look towards the future and not his past. “I was being selfish and spending money for only me,” he explains to her. “Because of long distance, I didn’t take you seriously.” “I’ve been scammed, straight up,” Deavan stresses to the camera. Jihoon asks her what he can do to prove that he is now serious about their family. She asks that he transfer $3,000 to her, instead of sharing his savings with his mother. “It’s not necessarily about having this money. It’s about knowing he isn’t lying, and I need him to prove he isn’t lying,” Deavan clarifies in a confessional.

Jihoon and his complaining mother go to the ATM, and Jihoon eventually hands the funds to a crying Deavan. “I feel like I just ruined my life,” Deavan says. “I just want to crawl into a hole and disappear.”

Tim and Melyza try to mend their relationship over breakfast. “The fact that for whatever reason our love has survived, even if it’s not as expressed as it used to be, gives me tremendous hope to figure this out,” he says to the camera.

Melyza tells Tim that she had shared with her mother his infidelity. He begins to cry, fearing what his potential future in-laws think about him now. “I realize when you do something like that to people, it kind of changes the image of you forever,” Tim says through tears to Melyza. “But it just makes me that much more motivated to do whatever I’ve got to do or try as hard as I’ve got to try, because I do love you…I want to earn you again. I want to deserve you again.” Melyza though is still skeptical of Tim’s performance. “I’ve heard it before…He’s going to have to earn his way back into our lives,” she tells the camera.

“What Will Society Think?”

Jenny and Sumit meet with his brother Amit. Sumit asks if Amit has spoken with their parents on behalf of Jenny; Amit says that he tried but their parents still do not want Sumit to marry Jenny, specifically because of their age difference. “This can impact our dignity, our social circle, society,” Amit tells them.

“It’s all ‘but what will society say, but what will society think?’ It’s like, f**k your happiness,” Jenny vents in a confessional. Amit invites her to meet with Sumit’s parents face-to-face to discuss the relationship. Sumit is worried that any confrontation will erupt into an argument.

“I just want everyone to be happy,” Amit stresses.

Jihoon visits Deavan and the kids at the hotel. He asks once again for Deavan to trust him. “He’s begging me for one last chance but at this point, it’s kind of a broken record. I just need to see actions,” she sighs to the camera. She directly tells Jihoon that she doubted whether he really loved her and confirms that they will have a joint bank account together. Deavan gives him one month to change, otherwise she’ll return to America.

“Ok I’ll do my best. I promise you,” Jihoon firmly states.

“I’m giving him this other chance because I believe our son deserves another chance. I’m doing this for our son,” Deavan clarifies in a confessional. They hug in the hotel room as a family.

Janice and Ariela go to the club to see Biniyam dance. Of course Biniyam’s sensual dance partner is his ex-girlfriend too. “Better watch out Ari,” Janice teases to a very pregnant and very unsatisfied Ariela. A self-described “jealous person,” Ariela looks on with a frown as Biniyam pretends to play the dance partner’s legs as a piano and her bottom as a bongo. Biniyam visits with Janice and Ariela post-performance, and Janice asks why Biniyam and his ex-girlfriend broke up. He explains that he didn’t give her enough attention and similarly warns that his ex-wife also was jealous…specifically because he came home with lipstick on his shirt. “Biniyam has told me multiple times all the little white lies he would tell to maintain his relationship. That is not what I want. Lying to make things better only makes things worse,” Ariela tells the camera.

Cry Me a River

Tim meets with Melyza’s parents and sister. Melyza explains that her future with him depends on her parents’ willingness to also forgive him. Over dinner, Melyza’s father asks why she decided to stay in Colombia instead of moving to America, like she had originally intended. Tim says that they had things to work on in the relationship, omitting the fact that he had cheated on Melyza. 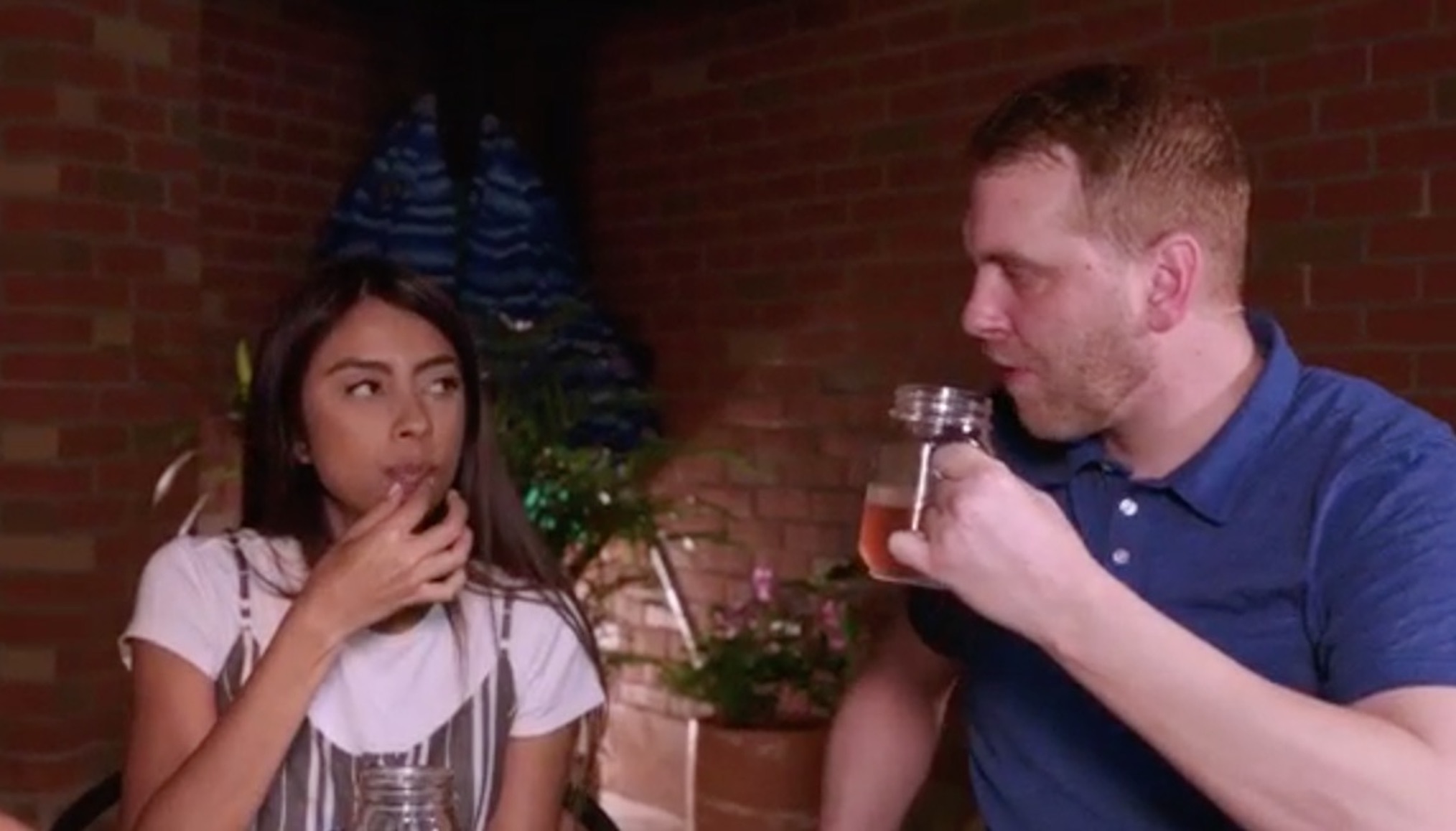 Moments later though, Tim does apologize to Melyza’s mother because she already knew about the affair. “I know that I’ve hurt you as much as I’ve hurt her,” he tells Melyza’s mother through more tears. “I just think I was purely being selfish and I wasn’t thinking.”

“It doesn’t mean Tim has changed because he cried. No,” Melyza’s mother rightfully says to the camera. She tells Tim that he does not have her approval to be with Melyza.

Kenneth’s family visits him in Mexico before he proposes to Armando, Deavan and Jihoon search for a new apartment, and Tim confesses to Melyza’s father about his indiscretion. Plus, Brittany visits a mosque in Jordan with Yazan, and he tells her that she needs to be Muslim in order to be his wife.