HBO Max is bringing attention to the ballroom community in its new, very fun series Legendary.

Teams (“houses”) battle in fashion and dance challenges including vogueing — a competitive style of modern dance with high fashion and choreography based on models’ poses — for the chance to win the legendary trophy and $100,000.

For Master of Ceremonies Dashaun Wesley and judge Jameela Jamil, doing this show was a no-brainer. “I love to see my community excel. There’s nothing like being appreciated for something you’ve been doing for so long, and people are now putting an eye to that,” Wesley explained.

For Jamil, it was being fans of DJ MikeQ, fellow judge Leiomy Maldonado, and Wesley. “To be even given the opportunity to watch it all unfold up close right in front of my own eyes was just a no-brainer,” she added. “It was only an honor to join in.”

Here, Wesley and Jamil take us inside the world of the underground ballroom community and Legendary.

What do ballroom and being legendary mean to each of you?

Dashaun Wesley: Being ballroom is so unique. You have to trust in yourself to know whatever you do is how it’s supposed to be. There’s no way of changing a result once you hit the floor or the runway. You do whatever it takes as a competitor to become legendary, definitely within this culture. This television show provides this opportunity for those of the community to step up and show their talents and creativity and give everyone an opportunity to know their worth. It’s so beautiful.

Legendary is such an amazing and fabulous word, so to become legendary is to really fit in that pedestal, to know that you have contributed and you have done so much so people can acknowledge it. Jameela Jamil: I’ve admired the ballroom scene from afar for a long time for many reasons. One of which is I wasn’t always super close with my own family and so watching the chosen family of ballroom is so beautiful and reassuring and inspiring to me and to see how much they really are real families to one another, how ride or die they are for each other is something I find very moving.

Also, their honesty about who they are, the way they exhibit such integrity and their truth against all odds and even if it threatens their safety or their ability to sometimes be able to be free, the way they just own their identity within that community is something I have rarely felt safe to do myself.

Also just knowing how much of music and lingo and dance and art and fashion comes from that community, to be a part of making sure that everyone knows that feels very important and timely. Dashaun talks a lot about the fact that social media has made ballroom visible to everyone, and because of that we want to make sure it doesn’t get stolen from, that we make sure they get the credit for what it is that they’ve built in culture. They’re responsible for most of what is good about modern pop culture.

What are you most looking forward to viewers seeing about the underground ballroom community?

Wesley: I just want people to see the integrity of those who are competing, to see the love, the passion, to see them work hard in so little time for an acknowledgement. They’re all fighting for the same thing. You’re going to see the blood shed with the tears and everything involved in it because people work so hard just to bring something so amazing in their hearts out to the floor. It’s a lot of money in stake and just to be put in that place to fight others and go against other people which we do on a regular in the ballroom culture, but when it’s for these high stakes and the cameras are right there, you have to step it up a notch. Plus, conversations for 'Perry Mason,' series ending in 2020, and more.

Jamil: It’s also exciting to showcase the love of ballroom. We see all the gorgeous art and a lot of the drama and the shade, and these are things that are incredible entertaining and enjoyable about ballroom, but something that Legendary will show — which Pose also does a really wonderful job at — is showing the heart and the love and the passion of ballroom and how much even people competing against each other love each other to death. They’re only competitors while they’re on the floor, and the second they step off [it], they are all friends and family again.

Dashaun, you’ve been MCing and in the ballroom community for years. What did you want to do as MC on Legendary?

Wesley: I wanted to make sure that what happened outside of the television world happened on television: making sure the cast competing are understanding what’s going on, making sure the judges know that whatever they say, it can be said, and the exchange between them both. I just want to make sure everything flows right so people can get the authentic form of what ballroom is. [Also] being put on a platform to make sure people know, this is where it began. This is where it is. This is who we are. These are the people involved. It’s a very big job to fill, but this is why Dashaun’s here. I’m ready for the challenge.

Wesley: I just wanted to make sure we all understood where the real core of where ballroom heart lies and where it comes from. Jamil: There was a misunderstanding at the very beginning that I was the one who was the main host, that I was the MC, and it was like, “no, no, no.” For two years, Dashaun has not only consulted on the show but has been at the heart of it, and he taught all of us so much. He kept everyone in line. We had a real ballroom community who were in the audience, and it was late at night, and it was in New York, and people were drinking, including the judges, and so Dashaun had to parent all of us. If the whole of Legendary was a house, Dashaun was the house father.

Jameela, what kind of judge are you? And what did you think of your fellow judges?

Jamil: I hope I am a fair judge, but I definitely think that I am a little bit of a softie. I fall for passion when I can see it someone’s eyes. Leiomy was someone who was good at maintaining being my example, looking at the technical excellence, so I didn’t get too caught up just in the moment. And my heart used to really break. I used to take it so personally that sometimes I couldn’t even look at the contestants when it was time for elimination. It felt so crazy to send someone home based off a one-off bad night or a one-week bad performance.

Leiomy is a true icon. She knows everything about the history and technicality of this culture. She was so clear at educating the contestants, judges, and audience. She’s such a vital part of this show. We’re so lucky she was involved.

Megan Thee Stallion is such a pussycat compared to her persona. It was all heart, maybe even softer than me. She’s just a gorgeous sweetheart who really cared. She really paid attention. She really made an effort to learn.

And Law was a bitch [Jamil and Wesley laugh] and so funny and so entertaining. And by the way, Law loves being that bitch, but Law did not pull any punches. There was no amount of booing or us arguing with him that could deter him. Law knows exactly who he is, exactly what he wants, and he said what he said.

Wesley: You just know it’s not coming from a place of favoritism. It’s all real honesty of how she felt, what was going on in that moment. I loved Jameela’s reactions. You get to see if something’s all amazing, Jameela’s face is going to be, “wow!” and she turns to the left and the right, “did you all see this? Oh my God.”

The structure when it comes to the judges is just so unique. You have someone like Law, who is, “I’m just going to give it to you. I’ll give you the tongue-lashing if it needs to happened,” compared to Jameela, who was “oh my God, I enjoyed what I’ve just seen, and I understand because of what’s being said.” [It] can be quite intimidating to a lot of people, when you’ve got judges who are so strong in what they believe but you also have to stand up for who you are as a judge and Jameela did an amazing job at that.

Jamil: Dashaun might be one of the greatest hosts of television history, and he’d never done anything like this before. I could not believe the grace and speed of which he became so iconic standing on that stage. It looked like he’d been up there for 20 years, honestly. I know in a way you had, but it’s different when there are cameras.

It’s different when it isn’t 2 am. It’s different when the world is watching you and you have teleprompters and you have people talking in your ear and you’re controlling this many people and it has to be so sharp and so polished and your outfits are so f***king tight. Dashaun not only is so visually stunning to look at but also just walks that line of authoritarian but also heart and love so perfectly. No one else could ever or should ever host or MC this show. Or any other show. This is just the beginning of Dashaun’s takeover. Plus, find out when the first 'Adventure Time' special debuts.

Which parts of Legendary do you think the other would have the most fun doing?

Jamil: Dashaun’s vogue-femme would be what [he] would enjoy doing the most because he would be able to bring all of his hand performance, all of his elegance and grace and just let those cheekbones do half of the talking at least.

Jamil: I learned how to do runway from Dashaun. [He] helped me the most and took me under his wing and coaxed me and taught me how to bring some sort of elegance to the runway because I’m not traditionally an elegant woman. I had to do my best to try and learn from the master that is Dashaun. 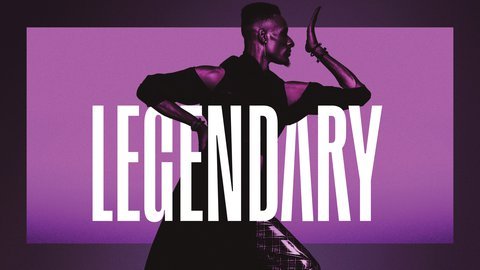