XOXO, is one of these actors playing the new Gossip Girl?

Emily Alyn Lind will play one of the lead characters, Audrey, in the HBO Max reboot, Deadline reports. She “has been in a long term relationship and is beginning to wonder what more could be out there.” When better for that to happen than when Gossip Girl is around to stir up some drama?

Whitney Peak, Eli Brown, Johnathan Fernandez, and Broadway’s Jason Gotay have also been cast in the series, TVLine reports. However, details about their characters have yet to be released.

This new series on the streaming service (set to launch in May 2020) picks up eight years after the original website went dark. (The original Gossip Girl aired six seasons on the CW, from 2007-2012.) It’s time for a new generation of New York private school teens to be introduced to the social surveillance of the titular character. The drama will address how much social media and New York have changed since the original series ended. Kristen Bell, who narrated the original series, returns in the same role. 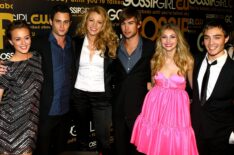