Critic’s Notebook: A Week at the Upfronts

If the saying is true that familiarity breeds contempt, you can expect the upcoming fall TV season—as presented at this week’s Upfront events in New York—to be the most contemptible in years. If there’s a running theme, it can be found within Fox’s remake (the season’s most magical word) of The Rocky Horror Picture Show. As in: “Let’s Do the Time Warp Again!”

RELATED: More of Our Upfronts Coverage

It somehow makes sense that one of the mini-trends of the new season involves the high concept of time travel, because the immediate future of network TV seems to rely heavily on remembrance of TV shows, and movies, from our past. As Jimmy Kimmel quipped during ABC’s Upfront: “All your favorite VHS tapes are now becoming shows.” Lethal Weapon. Training Day. The Exorcist. MacGyver. Prison Break. Dirty Dancing. What year is this again?

The lack of fresh ideas may be troubling for those seeking something new on network TV, but as always, the lineups will rise and fall on the quality of execution. Which is almost impossible to gauge from sitting through the trailers and teasers in this annual rite of collective amnesia. (Remember how excited we were last year at this time about The Grinder? No? So much the better.)

What everyone hopes for is the sort of out-of-the-box hit that can do for network TV what the Pulitzer-winning Hamilton has done in galvanizing Broadway. This trendiest of musicals provided rich meat for parodies at the Upfronts: Jimmy Fallon at NBC, and especially James Corden at CBS, giving the Carnegie Hall audience a taste of what his Tony Awards hosting might look like next month, as he merrily led a rousing chorus of singing-dancing colonials, proclaiming, “We just want your Hamiltons (and your Benjamins and Washingtons).”

The Upfronts are all about first impressions, and with that in mind, here’s a network-by-network (in order of presentation) rundown of what may be worth watching, or not. The Takeaway: What a mess. By mashing up all of NBCUniversal’s properties in a blob of titles that put channels like E! and Bravo on a level playing field with the Peacock Network, nothing much stood out. And forget a coherent narrative that you’d expect might have made much of Dick Wolf’s ever-expanding Chicago empire. Even when a clip resonated, it was undercut by a Kardashian cameo, or the spectacle of Mariah Carey carried on stage by shirtless hunks to promote her new reality exploitation show.

Most Promising Drama: High-concept time-travel thriller Timeless has the best time slot—Mondays at 10/9c after The Voice, which helped launch The Blacklist and Blindspot—and a strong cast including Rectify’s Abigail Spencer as part of a team zipping through time to try to stop a criminal from screwing up our timeline forever. I’m hearing good things about the sprawling tear-jerker This Is Us, about a disparate group of people (some of whom share the same birthday) who are connected in unexpected ways. Whatever the twist is, they’re keeping secret for now, and the clips don’t really sell it. But I’ve been missing a good weekly cry since Parenthood went off the air, so hoping this will fill that void.

Most Promising Comedy: Look to midseason for the true-crime mockumentary Trial & Error, cashing in on the craze for Jinx-Making a Murderer style programming, starring the great John Lithgow as the prime suspect in his wife’s murder, who looks guiltier the more you watch. (Not sure what to make of the one new fall sitcom, the fantasy-comedy The Good Place, starring Kristen Bell and Ted Danson and set in heaven, when the newly dead Bell begins to think she has been mistakenly assigned. She’s charming as always, but the twee humor feels awfully forced.)

Déjà Vu: Yet another Chicago-based spinoff, Chicago Justice, for midseason, along with The Blacklist: Redemption, built around Tom Keen (Ryan Eggold), and a drearily violent prequel to the Taken movie franchise.

Oddest Decision: Flipping Blindspot from a 10 pm (9c) slot to 8 pm (7c), where it will lead off NBC’s Wednesday lineup.

Biggest Swing: The long-in-development Emerald City (for midseason), which looks haunting in its lavish re-imagining of the Oz myth. But this is treacherous territory, as anyone who suffered through Syfy’s cyberpunk Tin Man miniseries might recall.

Show I’ll Miss the Most: The raucous Telenovela, which unlike its midseason companion Superstore did not get a reprieve. 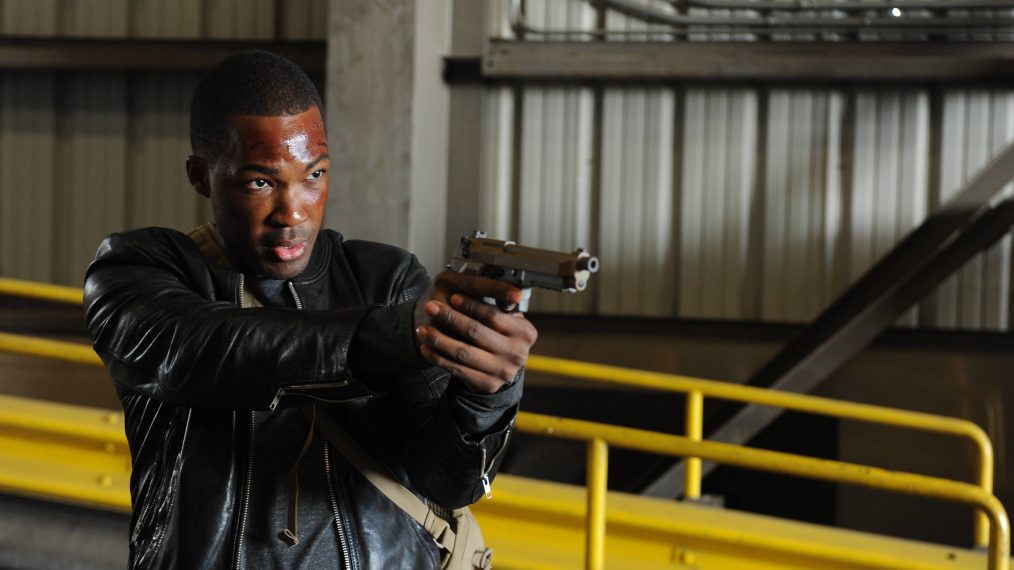 The Takeaway: Been there, saw that. The network’s two new fall dramas are both based on popular movie franchises: Lethal Weapon (which at least is well cast as it hits the expected action-comedy beats, with Damon Wayans joined by Rectify’s Clayne Crawford as a small-screen Murtaugh-Riggs partnership) and The Exorcist, which looks truly creepy, with Geena Davis as the mother of a haunted family. The biggest buzz came from an extended and exciting clip from the 24: Legacy reboot, which no longer features Jack Bauer but will get a boost from premiering after the Super Bowl in February. Reviving Prison Break just feels desperate.

Most Promising Drama: The inspirational baseball drama Pitch (for midseason), about the first female Major Leaguer. There may be no crying in baseball, but if this is even close to being the Friday Night Lights of the pitcher’s mound, we’re there.

Most Promising Comedy: The good news for Fox is that their comedy clips got the week’s biggest rise and laughs from spectators. Originality is key, including the animated-live action hybrid Son of Zorn, about a mythical warrior living in suburbia, and (for midseason) the time-tripping Making History and the more conventional, but very funny, The Mick, starring It’s Always Sunny in Philadelphia’s Kaitlin Olson as an unruly accidental mom to a spoiled brood.

Déjà vu: Should be Fox’s slogan this year. (See the “takeaway” item.)

Oddest Decision: Renewing Sleepy Hollow (for midseason), already diminished by its move to Fridays and further hobbled by killing off its female lead. Why not just put it out of its misery?

Show I’ll Miss the Most: The Grinder, which could have used a second season of nurturing to build an audience for such an offbeat and hilarious premise. Chemistry like that between Rob Lowe and Fred Savage should be treasured, not squandered. The Takeaway: Finally, a sure-fire hit. The audience left buzzing about Kiefer Sutherland’s Designated Survivor, a relief after a menu of so much “meh.”

Most Promising Drama: As noted, Designated Survivor, starring Sutherland (appealingly everyman in nerd glasses, the opposite of Jack Bauer) as a low-level cabinet secretary and doting family man suddenly elevated to the presidency by a terrorist attack during the State of the Union. Exciting, suspenseful, and grounded in a relatable character played by one of TV’s most enduring stars. (ABC’s other fall dramas seem overly infected with Shonda-itis, blurring legal drama with strained romantic dramedy.)

Most Promising Comedy: Speechless joins ABC’s winning Wednesday roster of unconventional family sitcoms, starring Minnie Driver as the hard-charging mother of a special-needs son. Maybe not the funniest fall comedy, but certainly the most heartfelt. In American Housewife, part of the network’s expanded Tuesday block, Mike & Molly’s Katy Mixon makes a strong impression as a brash mom who proudly breaks the mold of cookie-cutter perfectionist in upscale Westport, Conn.

What Were They Thinking? ABC wins this year’s prize with the midseason misfire Imaginary Mary. Imagine Trophy Wife saddled with the worst gimmick ever, as type-A businesswoman Jenna Elfman marries into a family but keeps getting distracted by a hideous imaginary-friend creature from her childhood. (A co-worker described this as looking like a “hairy tooth.”) Similarly weird is Downward Dog, also for midseason, in which a woebegone heroine’s life is narrated by her deadpan dog, who talks directly to the camera. On the plus side: the heroine is played by Fargo’s wonderful Allison Tolman, and the dog’s droll observations are pretty funny.

From the drama ranks, the ambitious costume drama Still Star-Crossed continues the story of the Montagues and Caplets after the tragedy of Romeo and Juliet. Something tells me Shakespeare was right in calling it quits when he did.

Déjà vu: No one can put our memories of the original Dirty Dancing in a corner, so good luck with this remake.

Oddest Decision: Removing The Middle from the Wednesday family-comedy lineup, where it has played successfully for the last seven years. Maybe it can work a similar miracle on Tuesdays, but it still feels like an undeserved demotion.

Biggest Swing: The civil-rights miniseries When We Rise, chronicling the political and human impact of the gay-rights movement, with a script by Milk’s Dustin Lance Black and a cast including Guy Pearce, Mary-Louise Parker, Rachel Griffiths and Rosie O’Donnell.

Show I’ll Miss the Most: I would have loved to see what thirtysomething veterans Marshall Herskovitz and Ed Zwick might have made from the shambles that was Nashville this season. Man With A Plan

The Takeaway: Playing it safe often works for this most successfully mainstream of networks, but you can’t help wonder when diminishing returns will set in.

Most Promising Comedy: Joel McHale snarkily overseeing a workplace of quirky millenials in The Great Indoors seems like a show that could grow on you—and airing after The Big Bang Theory on Thursdays will help that process. Conversely, the star vehicles for Kevin James and Matt LeBlanc, each playing overwhelmed dads in three-kids-and-a-couch scenarios, look awfully tired, and their titles sound like jokes from a parody of ’80s-era also-rans: Kevin Can Wait (so can I), and Man With a Plan (said plan presumably involving, “Show me the money”).

Déjà vu: A 15-years-later reboot of Training Day for midseason (did the network learn nothing from Rush Hour?), and a MacGyver origin-story prequel joining Hawaii Five-0 on what now looks like “Flashback Fridays.”

Oddest Decision: Yet another move for NCIS: Los Angeles to its earliest time period yet (Sundays at 8/7c), providing a peculiar lead-in to Madam Secretary, which is now sandwiched between two aging procedurals (followed by Elementary).

Show I’ll Miss the Most: Person of Interest, as exciting as ever in its final year. But the more surprising cancellation was the unexpectedly inventive and entertaining Limitless. Supergirl and The Flash

Most Promising Drama: As was the case the last two years, with the delightful introductions of Jane the Virgin and Crazy Ex-Girlfriend, romantic comedy is The CW’s other specialty, where true innovation flourishes. No Tomorrow might not (yet) be in their league, but CW shows of this stripe don’t look like anyone else’s. And so it is with this charmer about an insecure beauty (Tori Anderson) who falls for a bohemian (Galavant’s Joshua Sasse) whose seize-the-day philosophy has a lot to do with his apocalyptic prophesies. Peculiar to say the least.

Déjà vu: A murky reinvention of the cult 2000 movie Frequency, in which a female detective (Peyton List) reconnects with her disgraced and long-dead father (Riley Smith) through a supernatural radio transmission.

Oddest Decision: Breaking up Jane and Crazy Ex-Girlfriend (now banished to Fridays, where at least expectations will be lower for this oddball musical hybrid).

Biggest Swing: For midseason: the bizarre Riverdale, which places the iconic characters from the Archie comics into a grim, Twin Peaks-like world of shadowy, sexually sordid mystery. Archie sleeping with a sexy Ms. Grundy? Gee whiz. I’m not sure I’m ready to enter this twilight zone.

Show I’ll Miss the Most: Nothing. The CW didn’t cancel anything that mattered this year.