‘Shameless’ Finale: Love’s in the Air for the Gallagher Family & Friends (RECAP)

[Warning: The below contains MAJOR spoilers for Season 10, Episode 12 of Shameless, “Gallavich!”]

Shameless offered fans one hell of a finale episode for its penultimate season, packing a wedding, proposal, and more into the hour-long installment titled “Gallavich!”

Below, we’re breaking down the monumental episode, but beware of major spoilers ahead. 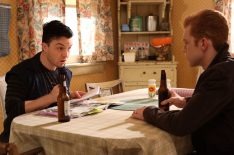 After years and years of on-again-off-again romance, Ian (Cameron Monaghan) and Mickey (Noel Fisher) finally made the leap by becoming husband and husband, but their happy day wasn’t seamless. As Ian gets ready for the day, his siblings are buzzing around, checking in on him, asking if he’s taken his meds that day, before Mickey arrives home and they take a moment alone together.

Not long into the day, they learn their wedding venue is on fire and burns to the ground, and it’s clear Mickey’s dad Terry (Dennis Cockrum) is responsible. Enraged, Mickey rushes to get his shotgun and flies out of the Gallagher house only to be tackled by Ian, Sandy (Elise Eberle) and more.

After they detain Mickey, the discussion about picking another venue is explored while Debbie (Emma Kenney) tries to keep things light as deliveries arrive at the Gallagher house. Eventually they land on the Polish Doll — a not-so-LGBTQ+-friendly establishment which will hold the ceremony unaware of the marrying parties.

In a deal struck up by Debbie and Lip (Jeremy Allen White), Ian and Mickey are told that Debbie may have to stand in as a bride in a fake ceremony to dupe the venue. As Ian and Mickey get ready, they discuss the idea of kids, and while the future is uncertain, it’s clear the pair are happy. When they show up at the venue, Mickey is clearly underwhelmed, but as more people arrive, the truth behind the ceremony gets clearer for the staff. Among the hints that it isn’t a heterosexual union? An interesting cake-topper. All the peeps come out for the event, including Ian’s “gay Jesus” friends, who guard the door.

Inside the hall, Lip shares a brother moment with Ian before accompanying him to the end of the aisle as Mickey walks down it with cousin Sandy. At that moment, the proprietor looks to the wall for his bat — infamous for beating anyone that’s gay — but Kev (Steve Howey) already has the weapon and waves it with a threatening look.

Will everyone from the Season 10 cast be back for the farewell?

Franny (Paris Newton) serves as a flower girl and Etta James’ “At Last” serves as the background music. Vows are shared, Frank (William H. Macy) cries, and emotions run high as the pair are announced husband and husband.

In the middle of the ceremony Terry visits the site of the original venue, now burned down, and sees one of his family members who, after being beat, reveals the location of the current nuptials. Angry, Terry takes off but is met by the door guards, and is deterred from shooting and drives off. Now in celebration mode, Ian shares a moment with Debbie as he mentions missing their mom Monica (Chloe Webb). She reassures him that Monica would have loved the day, and there’s a somberness to their exchange, but the mood is brightened when Ian goes to dance with Mickey and Debbie dances with Sandy to Ed Sheeran’s “Perfect.”

Eventually, the newlyweds drive off into the sunset in a nice car (courtesy of Liam’s wit). Later on in the final credits, we see the pair together in a honeymoon suite, but bliss doesn’t last long as Terry follows through with his shooting threat. Thankfully the boys are unharmed. The episode begins with Lip waking up on the couch inside the Gallagher house. When he goes out to the trailer, he finds Tami (Kate Miner), baby Fred and all of their things cleaned out with a key and note that reads, “go f**k yourself.”

It’s clear he’s in the doghouse for renting the house down the street without talking to Tami about it first. When he goes to talk to Brad (Scott Michael Campbell) at his house, Cami (Melissa Paladino) comes out yelling for her husband to fire Lip from the garage for what he did to Tami. Brad helps his friend though and mentions that Tami’s sneaking out the back of the house. They have a spat in the driveway before Tami drives off.

When Lip returns home and hears about the pickle of a burned-down venue, he accompanies Debbie to seek out the Polish Doll. He tells her to fake tears and pretend she’s the bride, but she doesn’t need any coaching as they work their magic. Later on, Lip gets emotional when he sees Tami and Fred arrive at the wedding, and he’s surprised she showed up at all. When he sees her saying goodbye to Ian at the end of the night, he follows her out and tries to discuss things, but their conversation turns into fighting — she threatens to take Fred to Wisconsin and tells Lip he loves his family more than her.

Scarily, the words she leaves Lip with lead him to the bar where he orders a Coke, but when the bartender asks if he wants rum … he says yes. Downing a few, Lip later seeks out Brad, asking to go to an AA meeting in the middle of the night. When Brad goes to grab a jacket, Tami pops her head out and sees the state he’s in. The next day, Lip works on the house he rented, tearing the walls out and getting down to the business of refurbishing it. Tami shows up and asks how many rooms are in the house before asking if there’s another mask. They end the episode tearing the walls apart together, a good sign moving forward. When we see Kev and V (Shanola Hampton), he’s continuing on with his new business plan of training wealthy men with his unauthorized fitness regimen. As he heads into the Alibi, V asks if he’s made any money today, and he lies to her, saying no, before tucking away the money under the bar. V’s quick though and notices the fib.

Later on when they’re at the reception for Mickey and Ian, she asks Kev about the money. He gets frustrated, and when she points out that they don’t lie to each other, he says sometimes lies are good before telling her she ruined his secret plan. He pulls a ring box from his pocket and lets her open it. Realizing the situation, she tells him to ask her his important question. They share a kiss when she agrees to marry him as their twin daughters join in on the group hug. In an effort to gift Mickey and Ian something important, Liam (Christian Isaiah) seeks out Frank, asking his father to attend the wedding. When he resists, Liam tells Frank that Lip’s selling the house and doesn’t plan to cut him into the money they’d receive for it. Liam gets him to drive one of Faye’s (Elizabeth Rodriguez) fancy cars and when they arrive home, Frank flies off the handle accusing Lip of leaving him out. When he learns it was Liam’s trick to get him there, he commends his son’s wit.

At first, Frank agrees to stay for the wedding but gets skittish when they pull up to the Polish Doll, as he claims the female owner wants to kill him. Liam takes the keys though, forcing Frank to go inside. Though enjoying the wedding, Frank’s nervous when he encounters the owner, but they end up making out for the rest of the evening in true Shameless style. 'Shameless' Christian Isaiah on Liam's Schemes in the Wedding-Focused Finale

The young actor also opens up about saying goodbye to the Showtime series with Season 11 later this year. Debbie’s story in this episode begins with her laying in bed with Sandy, and as the wedding drama unfolds, things go berserk when Julia (Alison Jaye) shows up with bags and claims she’s moving in because her mother kicked her out. Frustrated, Debbie gives the wedding her attention and leaves.

When alone with Julia, Sandy punches her in the face, but that doesn’t deter her. Debbie tells the girl she needs to leave, but Julia calls her mom Claudia (Constance Zimmer) and tells her she’s with Debbie, stirring the pot once more. Ignoring the drama, Debbie dons a wedding dress as a diversion to the bigoted proprietors. Taking a quick shot, she falls into a bout of hysteria to distract the female venue owner while Mickey and Ian’s wedding takes place. Meanwhile, Carl (Ethan Cutkosky) meets Julia and the pair get together when she tells him she’s not lesbian. The morning after the wedding though, cops are seen knocking on the Gallagher family house’s door. When Carl asks who they’re looking for, they say Debbie is being sought out for rape of a minor — most likely because Claudia probably called the authorities out of jealousy.

That’s when Debbie sets off running. Will she be apprehended? Fans will have to wait until the final season.