‘Grace and Frankie’ Are ‘Missing Each Other’ in Season 6

Hippie senior Frankie Bergstein (Lily Tomlin) has adopted a fresh outlook on the sixth season of the Emmy-nominated comedy: “Not processing is my new process.”

That credo comes in handy when she learns that her roommate/business partner, uptight Grace Hanson (Jane Fonda) has eloped with wealthy boyfriend Nick Skolka (Peter Gallagher) and will be moving out of the San Diego home they share. 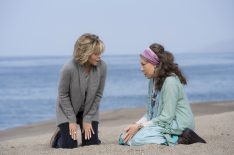 Plus, new guest stars Michael McKean and Mary Steenburgen join in on the fun!

Frankie’s denial, however, won’t last long. “So much this year is about Grace and Frankie missing each other and how they come back together,” says executive producer Marta Kauffman.

At first, the best friends try to move on. For her part, Frankie dates a man (guest star Michael McKean) who, executive producer Howard J. Morris teases, “is not exactly new to the family.” Newlywed Grace struggles to settle in with Nick. “Neither of them have had a successful relationship, so it’s a bit of a roller coaster,” Morris says of the divorcées. (Bonus: Viewers see footage of the pair’s Las Vegas nuptials, with an appearance by crooner Engelbert Humperdinck!)

Things are much more dire for Grace and Frankie’s respective exes, retired lawyers Robert (Martin Sheen) and husband Sol (Sam Waterston), when a serious health scare arises. But, as Morris reminds us, “the show is about hope, and things aren’t over when you think they’re over.” Get ready to 'rise up together.'

Alas, the same can’t be said of the comedy, which signs off after next year’s seventh season. Isn’t it time for Tomlin and Fonda’s 9 to 5 costar Dolly Parton to appear? Though Morris says timing and logistics make it tough, he concedes, “anything’s possible!”