Below, Smart is clearing some things up for us while teasing others. Plus, she’s revealing what it’s really like to film those back-and-forth scenes with costar Tim Blake Nelson. 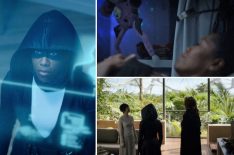 Laurie is such a fantastic character. How much of her is your own interpretation or creation and how much is part of Damon Lindelof’s vision and the source material’s?

Jean Smart: Oh, it’s such a combination of the three, it would be hard-pressed to separate them. But I’m very pleased that Damon – who is an aficionado of the source material – was very pleased with what I did. I feel like most of it was right there on the page, and to me at least, I knew exactly what I wanted to go with her after reading that first episode. Because there was so much in that introductory, I was so grateful to that.

There’s only one other character I’ve ever played where the introduction was that amazing and told us so much about them. The fact that you just got to see so many sides of her in one hour, for an actor, it was just kind of an extraordinary gift. Yes, your episode and Tim Blake Nelson’s Looking Glass installment are certainly standouts for the introductory stories being told this season.

I love my scenes with him so much and he’s become a good friend. That’s one of the highlights of having done this show, was meeting and working with Tim, because he’s extraordinarily talented and he’s just a minx. When we’re getting ready to shoot a scene, we’re just getting ready and he’ll say something to me under his breath that just has me on the floor. He’s just naughty.

You guys have such a great back-and-forth on this show in any scenes that you share. Is it as effortless as it appears onscreen?

In between shots, he will definitely come up with something that just has me dying. But other than that, yeah, it was pretty effortless. He’s like my ideal actor. He is incredibly talented and serious about his work, but at the same time, can just have so much fun. That to me is just the best, and I’ve been very fortunate.

Angela (Regina King) is about to take quite a trip if those pills mean anything. What can you tease about the upcoming episode?

Which is horrifying. It’s like the world’s worst acid trip ever. It’s such a brilliant stroke on the part of Damon and the other writers. It will be so unexpected, that’s all I can say. I mean, that’s what I love about this show, is that every time you think you know where things are going, they throw another curveball at you. I just think that it’s kind of brilliant. Would you say that Laurie’s an ally to Angela? They seem to push each other to their limits.

It could start going in that direction, their relationship goes up and down throughout the season. At first [Angela] was just a murder suspect, but I think [Laurie] realized quickly that that was probably not the case and it was a lot more complicated than she thought it was going to be. I think there becomes a grudging respect and then that goes away for a while, and then it kind of comes back.

If we get a second season, it’ll be interesting to see where that goes, because you can see a world where they might’ve been allies and coworkers, maybe even sort of friends — although Laurie doesn’t seem to have any friends at all. It’s interesting, because I say that to Angela, I say, “You don’t strike me as the kind of person who has friends,” thinking, “Wow, talk about the pot calling the kettle black.”

It takes one to know one.

Good God. And [Laurie] says that with all sorts of chutzpah like she thinks she’s just got [Angela] all figured out. It’s like she should look to herself a little bit.

We learned some new information about Joe Keane (James Wolk) being part of the Seventh Kavalry. Is Laurie oblivious to this information? Would Laurie cross Keane considering she may have something to lose? He mentioned pardoning a certain “caged owl.”

Yeah, get my owl out of the cage. He’s thrown a little bait, dangled a little bait in front of her about Dan [Dreiberg] – one of her exes.

Laurie got Looking Glass – Wade – to turn on Angela. Was that smart of him, or will it come back to bite them both?

Oh, you’re just going to have to wait and see.

Episode 3 really highlighted your character’s story, but we also were left with many questions about who Laurie really is in 2019. Can we expect anymore on her background before the season is through? We know she uses her father’s last name now.

I have a scene where you will find out how and why Laurie ended up where she is. Then the ending is just… nobody’s going to see coming.

Laurie’s distaste for Adrian Veidt (Jeremy Irons) is quite clear from her mocking his golden statue to being dismissive towards Petey’s questions. Do you think she’s aware just how deep his influence is?

Oh yeah, don’t you love that? I think that her relationship with him is that she kind of thinks he’s a mad man. But he’s part of her past, there’s almost like a nostalgic kind of comfort there or something. It’s sort of like, “oh yeah, he’s part of the old days.” I think she misses the old days more than she would ever, ever admit.

She keeps part of her old days locked away in a briefcase, technically.

Well, yes. I just want a copy of that Esquire cover, that’s all I want. Mare of Easttown is your next project, which is currently filming. What can you share about your role in this HBO limited series?

It’s so beautifully written and I can’t say enough about Kate Winslet. She is as adorable and generous and sweet as she is talented and beautiful and famous. I play her mother, they don’t have a great relationship. I’ve moved in with her very recently to help take care of the grandson and she’s a rather bitter disillusioned police detective who’s dealing with some extraordinary loss.

It’s just this real gritty story about life in this part of Philadelphia that’s an Irish Catholic, blue collar community, and there are amazing characters in the story. It’s one of those where you’re not going to know who did it until almost literally the last…