Over the years, viewers have come to know and love bounty hunters Duane “Dog” Chapman and Beth Chapman, and we’re able to continue following their crime-stopping adventures on WGN America’s Dog’s Most Wanted.

But things took a heartbreaking turn this year for the Dog the Bounty Hunter alums when Beth passed away at just 51 after years of battling throat cancer.

Her loss has had a major impact on the family who had to say goodbye, as well as the fans who enjoyed seeing Beth do what she did best — combat crime. And in an exclusive clip from an upcoming episode of Dog’s Most Wanted, fans are given a glimpse at the couple’s struggle with her disease prior to her death. 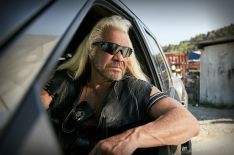 In a voiceover, Dog reveals that Beth’s been told her cancer is incurable. As they participate in a photo shoot for the show, Beth relays her feelings on treatment and her overall health during a pivotal car ride.

“You can either have a quality of life or what?” Dog asks. “Quantity,” Beth answers as Dog echoes the same word. “It’s up to you,” he tells her about the idea of continuing treatment or not.

Her response is heartbreaking. Find out what she says in the exclusive clip above, and don’t miss the latest episode of Dog’s Most Wanted when it airs on WGN America.