9-1-1 (8/7c, Fox): Some weeks, the first-responder drama raises the stakes so high it can feel like a disaster movie — and that’s certainly the case when a tsunami swallows the Santa Monica Pier. Not such great news for an off-duty Buck (Oliver Stark), who’s been treating little Christopher (Gavin McHugh) to a day by the beach. The rest of the team, led by Captain Bobby Nash (Peter Krause), have plenty of panicked people to rescue, including riders on the iconic nine-story-high Ferris Wheel (which I have ridden in calmer times). Look for Ronda Rousey to make her first appearance as firefighter Lena Bosko. Because if anyone can save the day… 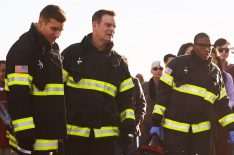 A Very Brady Renovation (9/8c, HGTV): The enjoyably nostalgic project, which brought the Brady kids back together to help convert an actual suburban home’s interior into a replica of The Brady Bunch‘s soundstage set, has come to an end. Among the final task: Barry Williams (Greg) working with Flea Market Flip‘s Lara Spencer and Hidden Potential‘s Jasmine Roth to conjure the ghost of Greg’s attic bedroom from a very different part of the house. Jasmine also pairs with Mike Lookinland (Bobby) to pull off a recreation of parents Mike and Carol’s (the late Robert Reed and Florence Henderson) master bedroom. These aren’t the only reveals, because in his off time, Williams also guested on Discovery’s Fast N’ Loud to makeover a 1969 Plymouth Satellite station wagon into the Brady family car, which drives right up to the restored house as a surprise to the rest of the bunch. See before and after as HGTV designers like the 'Property Brothers' and the 'Brady Bunch' cast take us inside 'A Very Brady Renovation.'

Prodigal Son (9/8c, Fox): The night’s most gripping new series plunges profiler Malcolm Bright (Tom Payne) deeper into childhood nightmares of his serial-killer father (Michael Sheen) as he tries to remember just what happened the night he found a body in a box — which was never located — and blew open “The Surgeon’s” identity. Malcolm’s mother, Jessica (Scandal‘s terrific Bellamy Young) wishes he would just let it go: “You think life is a case to be solved. Sometimes it’s just a tragedy to be endured.” But the case of the week, involving the poisoning of four members of a dysfunctional family, gets under his skin, both literally and figuratively. From prison, Dr. Martin Whitly (Sheen) would kill to help his son solve the case: “I have so much to offer,” he gloats. “We’re both obsessed with murder: like father, like son.” That’s what Malcolm is afraid of. How does Ainsley react when she learns where her brother's been going?

The Good Doctor (10/9c, ABC): In saving Shaun’s (Freddie Highmore) job last season, former chief of surgery Dr. Andrews (Hill Harper) lost his own position, and last week returned to the hospital in a demoted role as an attending surgeon. So it’s no surprise that he’s initially scornful of the sacrifice made by a good Samaritan who nearly lost half of his face while trying to stop a groping incident on the subway. “Sometimes the hero loses,” Dr. Lim (Christina Chang) observes. But not always, as Shaun tries to ignore all the relationship advice coming his way to concoct a miracle fix for the injured good guy. Which is all very moving, thankfully balancing out the annoying subplot of ambitious Reznick (Fiona Gubelmann) and Park (Will Yun Lee) vying for the first solo surgery among the residents. See the character interact with a bathrobe-clad Blaise.

Inside Monday TV: Acorn TV heads into international waters with the premiere of the 12-episode Italian-language drama Back Home, about a farm owner (Alessio Boni) who wakes from a five-year coma to find everything in his life has changed — and as his memories return, so do dark secrets from his past… Also streaming: a second season on BritBox of the British golden-years rom-com Hold the Sunset, starring John Cleese… It’s a yabba-dabba-do-over when nostalgic MeTV returns the iconic animated hit The Flintstones to prime time with back-to-back episodes Monday to Friday (6 pm/5c), starting with the 1960 pilot episode… ABC’s Dancing with the Stars (8/7c) presents “Movie Night” with the remaining teams dancing to memorable themes including the Oscar-winning “Shallow” from A Star Is Born… Billions‘ Paul Giamatti visits AMC’s Lodge 49 (10/9c) — he’s an executive producer — as L. Marvin Metz, who arrives at the Lodge with Dud (Wyatt Russell) and Ernie (Brent Jennings.)