The question begged by Ryan Murphy’s first made-for-Netflix project: Do we really have the stamina, or stomach, to watch yet another despicably unpleasant politician on TV?

A tonal free-for-all, with ludicrous plotting and cartoonish characters revolving around a chilly antihero it’s hard to muster much empathy for, The Politician is a garish and lurid hot mess, the Ryan Murphy-est Ryan Murphy show in quite a while. And yet somehow, it’s hard to turn away from even when you wish it would stop — sort of like looking in on a train-wreck presidential rally or one of those clown-car who-are-all-those-people shouting matches that pass for today’s political debates.

Of course, this isn’t the first time a high school has served as a backdrop for satirical political allegory — see Alexander Payne’s brilliant 1999 Election — but The Politician plays it so broadly, in a heightened fantasy world where the students look more like perpetual grad students than teens and dress like preppies from a bygone era, that it’s impossible to find common ground with reality. Or much care who wins or loses.

The stakes aren’t even as high as its main character would like to think. Broadway star Ben Platt (Dear Evan Hansen) is a neurotic bundle of privileged calculation as Santa Barbara scion Payton Hobart, who believes that running successfully for student-body president at his posh high school will help groom him for Harvard on a “singular path” to the biggest, most powerful office in the land. As Payton tells an appalled dean about the lesson he learned from Ronald Reagan’s creation of the modern presidency: “People like to think of their presidents as characters they see on TV.” Yes, we get it. Everything Payton does is manufactured, never genuine or sincere. He’s joyless, humorless, more robot than human. Even when he questions whether he has any true feelings at all, he’s not really feeling it. The moments when he comes closest to actual emotion are when he’s singing, in contrived scenes that play like warmed-over Glee. (Would you believe that this school’s idea of a high-school musical is Sondheim’s Assassins? Me neither.)

In this candy-hued circus of Murphy’s wild imagining, Gwyneth Paltrow maintains some dignity as Payton’s zen goddess of an adoptive mother, who frets over her adored and adoring son’s obsessive ambition. The series’ other marquee star, Murphy regular Jessica Lange, chews the gaudy scenery as blowsy Dusty Jackson, the avaricious grandmother of Payton’s running mate, a sickly make-a-wish poster child named Infinity (Zoey Deutch). Her cancer is a perfect complement to Payton’s prematurely corroded soul, although like most elements of The Politician, there’s a wacky twist. (And any resemblance to a recent Emmy-winning streaming miniseries is hardly a coincidence.)

As Payton and his unaccountably loyal accomplices scheme against equally hollow opponents, the outrageous ups and downs and reversals begin to feel less like a binge than a gorge. It’s all undeniably colorful, though ultimately exhausting. And yet there are payoffs if you follow it through to the end.

A sharply focused (and shorter) fifth episode is a jolting and sobering change of pace, following a geeky and possibly freaky “undecided” student through Election Day. And the story thankfully shifts gears in a big way in the eighth and final hour, setting up a more promising second season while introducing vivid new characters played by the fabulous Bette Midler and Judith Light. The cast offers insight into Payton and those in his orbit of Ryan Murphy's new series.

Murphy envisions The Politician following Payton into his 40s, with each season depicting another campaign as he follows his deranged dream. It’s a fascinating premise, and while this first arc might have worked better as a flashback within the upcoming storyline, like most of Murphy’s work it’s never, ever dull. 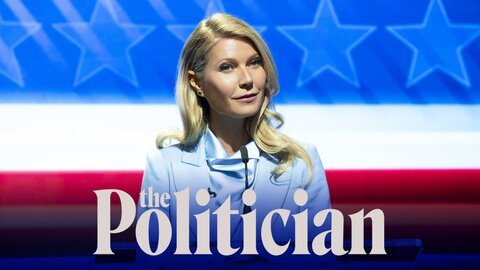