The streaming service made its debut at the D23 Expo at the Anaheim Convention Center in Anaheim on Friday, and among the new series revealed were one in which an actress is reprising the role and a new unscripted series from The Muppets.

Hilary Duff will be reprising her role as Lizzie McGuire in a new series from Terri Minsky. It will follow Lizzie as a 30-year-old millennial in New York City and feature an animated version of the character.

“SURPRISE!!! I’ve been trying to contain this excitement for a loooong time while this has been in the works! I am beyond excited to be home again, back with my girl … and into her 30s,” Duff wrote in the caption of a video featuring clips of the original series on Instagram.

SURPRISE!!! I’ve been trying to contain this excitement for a loooong time while this has been in the works! I am beyond excited to be home again, back with my girl ♥️…and into her 30’s #bringbackbutterflyclips #lizziemcguire #thisiswhatdreamsaremadeof #lizzieforpresident #DisneyPlus #D23Expo . . . . . . Also, If you needed yet another reason to get Disney+ ….the #lizziemcguiremovie will be living there!

It’s been 40 years since his big screen debut in The Muppet Movie, and Kermit the Frog is back for more, in an unscripted short-form series, Muppets Now, with Miss Piggy and the gang.

Stars also debuted trailers for movies which will be available when the service launches on November 12. Yvette Nicole Brown and fellow Lady and the Tramp cast members and canine stars Rose (“Lady”) and Monty (“Tramp”) debuted the first look at the re-telling of the 1955 animated classic.

Noelle‘s Anna Kendrick and Billy Eichner star in the upcoming holiday comedy about Kris Kringle’s daughter who wants to do something “important” like her brother Nick. (He’s about to take over from their father.) When he’s about to crumble like a gingerbread cookie from the pressure, she suggests he take a break, and when he doesn’t return, she has to bring him home.

Jeff Goldblum will star in and host the 12-episode The World According to Jeff Goldblum from National Geographic. We already know he’ll be diving into the worlds of tattoo artists and synchronized swimming.

Executive producer Kristen Bell revealed what to expect from the unscripted series Encore!, which brings together former castmates of high school musicals and tasks them with re-creating their original performances years later.

Gina Rodriguez, who will serve as an executive producer and also recur, joined the star of Diary of a Female President, Tess Romero, to announce it will premiere in January. The half-hour single camera comedy follows 12-year-old Cuban American girl Elena’s journey through the trials of middle school, which set her on the path to ultimately become President of the United States. It will be told using the narration from her diary.

Monsters at Work stars Ben Feldman and Aisha Tyler unveiled the latest design of their characters Tylor and Millie from the series inspired by Monsters, Inc. It returns to Monstropolis and follows new monsters with special appearances from Mike and Sully. 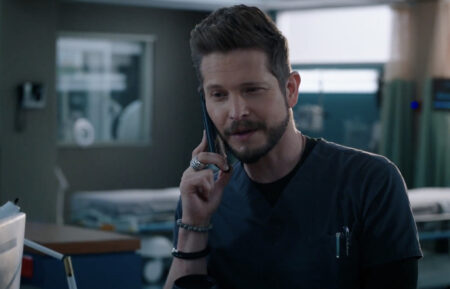