He’s no ordinary man. Swarthy, reckless, principled (most of the time) 18th-century British Army captain Ross Poldark (Aidan Turner) is the derring-est of doers. In Poldark‘s fifth and final season — coming to PBS’s Masterpiece this fall — producers are taking a risk worthy of the gutsy hero: departing from the beloved books by Winston Graham on which the saga is based.

Ross will still get steamy with the love of his life, wife Demelza (Eleanor Tomlinson). He’ll still gallop on horseback along the Cornish cliffs to right an injustice, say, or rescue a friend. And he’ll still labor to keep his family’s struggling tin mine in business.

The difference in these eight episodes: The reluctantly elected first-term member of Parliament will also face political intrigue and a murder mystery in London.

“Ross is always a man of action,” says executive producer and writer Debbie Horsfield. “Even his pastimes in London involve ferocious sword fighting [something viewers have never seen him do] — and that’s just for fun! There’s a later sword fight where he is very heroic indeed.”

There's a heart-to-heart to look forward to and a death to be concerned about.

But why is Poldark, like TV literary adaptations of George R.R. Martin’s Game of Thrones and Margaret Atwood’s The Handmaid’s Tale before it, plowing into new territory that won’t be familiar to readers who make up part of its loyal fanbase? Horsfield points to the time gap between Graham’s seventh book, The Angry Tide, which was covered in Season 4 and ends in 1799, and the eighth, The Stranger From the Sea (there are 12 total), which picks up again in 1810. Producers wanted to give fans another season with their favorite characters without aging them or changing locations.

“In Book 8, Ross is a secret agent on a mission in Portugal, reporting to the British government. My question was, ‘How did that happen?’ This season, which covers 1800 to 1802, sets that up,” reveals Horsfield. “I had to plan the characters’ journeys without contradicting anything in the final five books.” In addition to mining those titles for clues to the intervening years, she also did historical research to create a rich setting for these fresh adventures. At the heart of Ross’s journey is, of course, Demelza. In Season 1, he hired her as a kitchen maid, but it soon became obvious she was his equal in wit, intelligence, and brazenness. Sparks flew. One of Tomlinson’s all-time favorite Poldark scenes is in the series’ third episode, when her character famously asks Ross to unfasten her blue-green dress, leading to their first roll in the hay.

“It’s clear they have true feelings for each other,” Tomlinson says. “Aidan and I have chemistry that works on camera. We can’t define it.” Turner tries, saying of his costar, “Just look at her. She takes you there, you know?”

Poldark star Aidan Turner gets candid about his character on the show, horses and his insane dance moves.

The soulmates have also been through a world of pain together, or, as Horsfield puts it, “Their love story is not rose-tinted.” They weathered their first child’s death, poverty, mine disasters, and social-class conflicts, but it was infidelity that almost split them up.

His night of passion with first love Elizabeth Chynoweth (Heida Reed) in Season 2 — before she married greedy arriviste banker George Warleggan (Jack Farthing), Ross’ nemesis — resulted in a son now being raised as George’s. And in Season 4, Demelza had a fling with Lt. Hugh Armitage (Josh Whitehouse). (Explains Horsfield: “He flattered her into it.”) The Poldarks grieved, forgave, and declared anew their love for each other. (They also had a London getaway that brought relieved viewers a sensual scene at an inn.) 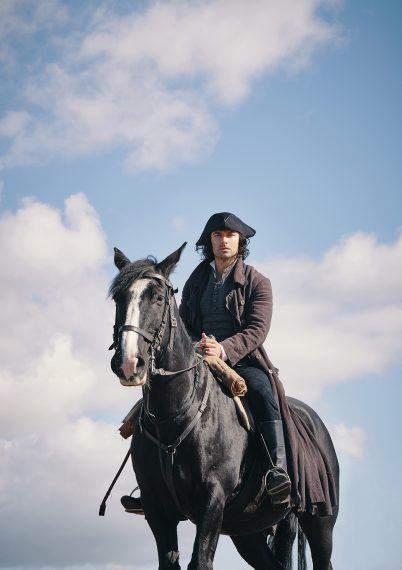 In the upcoming season, the couple adjust to Ross often being away from home in Westminster. Demelza shoulders more of the parenting responsibilities for son Jeremy and daughter Clowance, and she takes on a bigger role running the mine and their home, Nampara, in Cornwall.

One unfortunate decision: hiring a farmhand, Tess Tregidden (Sofia Oxenham), who secretly seeks to seduce Ross. “Tess has got designs on all kinds of things,” Horsfield hints. Everyone, it seems, has an angle.