‘Suits’: Louis Has a Big Decision to Make After Faye’s Latest Move (RECAP)

[Warning: The below contains MAJOR spoilers for Season 9, Episode 3 of Suits, “Windmills.”]

Faye Richardson (Denise Crosby) has now been around for three episodes, and it’s three too many for the firm on Suits.

But as determined as she is to fix the problems she sees with these lawyers, they’re equally determined to get rid of her — or at least make her life harder. To that end, Harvey (Gabriel Macht) seeks out a case she can’t be part of. Samantha (Katherine Heigl), unsurprisingly, comes up with a solution that crosses a line, but Alex (Dulé Hill) instead comes up with a way to help her get back on track.

Meanwhile, Louis (Rick Hoffman), just stripped of his title as managing partner, receives a job offer that could make his dreams come true — if it’s still what he wants.

Plus, Donna (Sarah Rafferty) and Harvey come up with a way to make sure their work doesn’t intrude on their relationship: date night once a week, and they can’t talk about the office. They get off to a shaky start at their first dinner. Their conversation topics are “water is wet” and books, and both are angry with Faye (Harvey over his case, Donna because the special master ordered her to do secretarial work for her).

However, they soon discover there are still things they don’t know about each other, like Donna reminding Harvey of a friend’s mother he had a crush on as a teenager. Sheila (Rachael Harris) wonders if Louis losing managing partner was really the worst thing, pointing out that he didn’t want it in the beginning. He came to enjoy it, he says. “You said you fell in love with me because I was a lion,” he reminds her. He no longer feels like one, and he doesn’t know if he can keep going to work and not be the one in charge.

But there’s a way to fix that and not go down with the sinking ship that is the law firm: take a judgeship his old friend offers after Sheila goes to see him. And if he doesn’t, he may not get another chance. 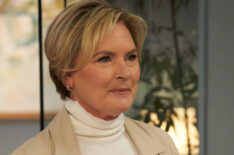 Louis agrees to sleep on it, leading to a dream where he, as judge and prosecutor, puts Faye on trial (for being herself?). The best part has to be the jury full of Harveys, especially the one with a cat. They find Faye guilty on all charges (which are never mentioned), and Judge Louis sentences her to death.

But all it takes is one session with Dr. Lipschitz (Ray Proscia) for Louis to realize that his fantasy world had his coworkers in the courtroom with him. He hasn’t thought about what he’d do without them, and he doesn’t want to leave them.

After Harvey sided with Donna on the Benjamin issue in Episode 2, she promised Louis that their relationship won’t affect how they treat him and they’d be there for him. However, after forcing Gretchen to tell him where they’re having dinner, Louis goes to the restaurant and watches as she sends his call to voicemail. The next day, Louis tells Harvey he’s taking the judgeship because he’s had enough. He thought the couple was laughing at him after ignoring his call, but Harvey assures him they weren’t. He promises he’s in his corner and has been fighting for him, but Louis wishes he’d just sit with him instead. Harvey understands if Louis needs to take the job, but he doesn’t want Faye to pull them apart.

In the end, Louis decides to stay at the firm and gets to be the focus of a girls night with Donna and Sheila.

Harvey Does Things His Way

Upon learning what Faye did to Louis, Harvey tells her he refuses to answer to her. And he makes sure he can’t with his next case, one involving her old firm. She’s forced to recuse herself, but she warns him not to cross any lines. However, when his client is fired, Harvey assumes it was Faye who told her old firm about the clause that allowed it to happen. She insists she didn’t. In the end, Harvey does manage to fix everything, by doing things his way. He uses his relationships with people to get Kevin Miller to buy the company and hire back his client, with Faye’s old firm remaining its counsel. But he wants something from Faye. Gretchen took over the secretarial work that had been given to Donna, and Harvey wants Faye to give Louis back his secretary. But Faye refuses to let Harvey extort her. Furthermore, since he hasn’t crossed any lines, she thinks she’s doing her job.

Since she’s grown fond of Louis, Samantha is determined to help him by getting rid of Faye. And while she’s willing to try to find something on the up and up, the plan she presents to Alex is anything but. If the presence of a special master causes significant harm to a firm — say, if a client left, blamed her, and started an avalanche — he or she can be removed. But in this instance, they, not Faye, would be the ones causing harm, Alex points out. Samantha doesn’t take that well and calls him a coward, which she later apologizes for. She admits she’s been off-kilter since Robert left, and Alex tells her that when things aren’t going well for him in one part of his life, he looks to another, usually his family. “Are you trying to adopt me?” Samantha asks. Well, first he’s inviting her over for dinner.

There, she sees Alex and his wife deal with his daughter trying to hide the fact that she hit a pole while driving his car. After, she admits to Katrina that the dinner reminded her that the people in the firm are the closest thing she has to family and thanks her for standing up to her about Lucas.

But the dinner also made her realize something else, she reveals to Alex. She wants to find out who her biological parents are.

You Can’t Always Get What You Want — Even With Blackmail

Susan (Alison Louder) is eager to be Katrina’s (Amanda Schull) next associate, but she goes about it all wrong.

She gets off to a great start, finding something key to Katrina’s case. However, she then reveals that she wanted to work with her because the lead counsel on the other side is a family friend and she thinks she can convince her to settle. When Katrina tells her it won’t work, Susan tries to anyway.

Furthermore, Susan asks for advice about a paralegal she clicks with, and Katrina suggests she find a different paralegal. Susan puts two and two together and gets some number that’s not exactly four and accuses Katrina of buying Brian’s silence. She also threatens to tell Faye if Katrina doesn’t make her her associate by the end of the week. Katrina seeks advice as well, from Samantha. The other lawyer warns her that if she gives the person with information on her an inch, they’ll take a mile. So, Katrina brings Susan to Faye and tells the special master that the associate owned up to a mistake she made. Faye sees this as a sign that there are some people at the firm who aren’t corrupted.

Ambition isn’t a bad thing, Katrina later tells Susan, but it can’t be all she has. Let’s just hope Susan learned her lesson.