It’s not everyday that a fan favorite show comes back from the proverbial TV grave, but Last Man Standing has returned in earnest with a fan response that won it a second season at Fox.

Now, as the cast celebrates the exciting news, it must be acknowledged that the series also marks 150 episodes on air as of Friday, April 19. Last Man Standing is a comedy that endures, and it doesn’t look as though it will be going anywhere anytime soon. “I’m over the moon! I feel like baking a cake, I’m so excited,” star Nancy Travis told us just hours after the season renewal news broke.

On the eve of the sitcom's milestone 150th episode, the network announced the show will be back for the 2019-2020 season.

The actress, who plays the Baxter family matriarch, Vanessa, talked to us about the episode milestone, season renewal and more.

Congrats on 150 episodes! What was it like celebrating that milestone on set?

Nancy Travis: It is stunning that we made one hundred and fifty episodes. That’s an enormous amount of episodes, and I wasn’t even aware of it until I showed up for the table read and there was a big banner in the room that said, “Congratulations on a hundred and fifty episodes.” It’s a testament to the durability of this show and the fact that people love to watch it and that we keep getting these chances to make it. It always feels like we’re hanging on by a thread and we keep coming back [Laughs]… We never know what’s gonna happen and studios are shifting, shaping, changing ownership and that sort of thing, but Last Man Standing seems to endure, which is thrilling for me because I love doing the show. You’ve also been picked up for another season at Fox! When did you find out, and what was your reaction?

Every year we’ve always felt like we were going to be picked up and then it was a nail biter right until the end, and then the one year where we were certain we were going to be picked up is the year we were canceled. … Going into this pickup season, [we] definitely felt confident that the show was going to [be] picked up cause we were doing so well for Fox on Friday, but by the same token, until you actually see it in print [Laughs], it doesn’t matter what anybody says.

Until you actually see it, then it’s not real. I’ve heard from everyone from the hair and makeup department to people on the crew to the other cast members, everyone is very very happy and so glad to be back — mostly for the show, but we’re also fond of each other and love working.

'Last Man Standing': Tim Allen & Nancy Travis Break Down Why Season 7 Is Such a Hit

The two weigh in on the show's lack of an 'agenda' and how their personal lives impact storylines.

What kind of fan responses have you received the most over the past season?

I’m on Twitter — it’s the only social media that I’m on — and I put out a little tweet saying “open the chardonnay because Vanessa loves her wine [Laughs],” and quickly hundreds of people [were] liking the tweet and celebrating [with comments like] “can’t wait,” and “don’t think I could live without it” and “I really love to wind down my day and be entertained by this show.” Especially hearing a lot of people saying “it’s just great to have something that we can laugh at and laugh with” in these times when not a lot of people are laughing.

Do you ever laugh out loud when reading the scripts? Every episode seems to have so many hilarious moments.

Yes, we really do. What’s also a lot of fun is not only is it often funny on the page when we first read it, but… when we’re actually taping it, something that we’ve rehearsed to death suddenly takes on a new life with the live audience. Sometimes there are things that didn’t even occur to us because the people know these characters so very well and almost know what they’re gonna say before it comes out of their mouth, like for Vanessa. She makes a lot of these silly puns and [Laughs] sometimes you’ll say something and the audience will start laughing before I even get a chance to respond with the pun because they know what it’s gonna be. So I think there’s just a comfort in the familiarity with these people and the fact that it’s escapist — we’re just trying to entertain. And I think [we’re] successfully doing that. 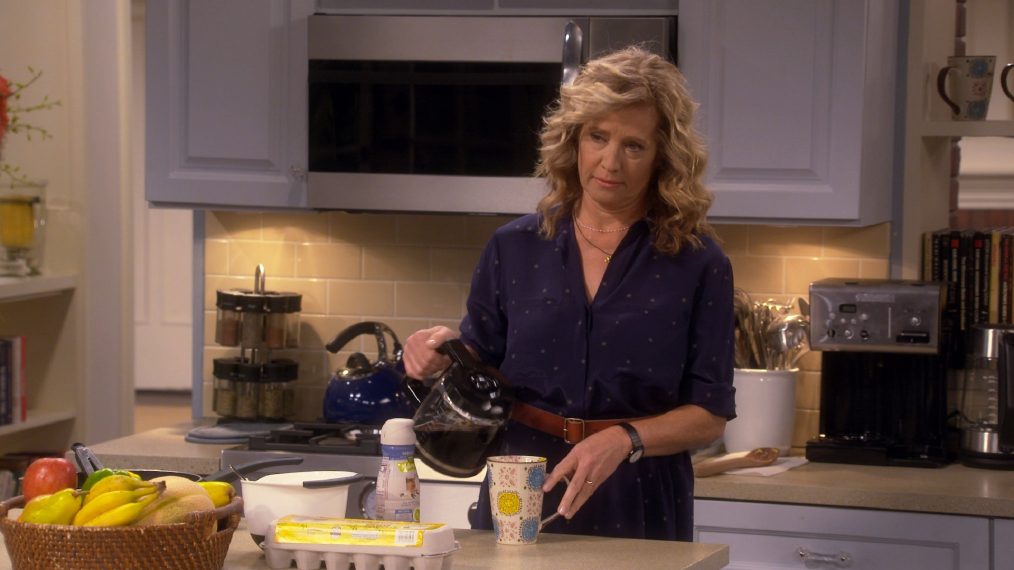 What’s the collaborative process like between the writers and yourself? Do you have a say in Vanessa’s storylines?

They write the scripts, the writers — believe me, the show would not exist were it not for the writers… [they] are the number one power in the show. Within that, we rehearse it and try to get it on its feet. We’ll often just have a lot of things to add, and off-the-cuff kind of humor that some of it makes it to the show and some of it just it can not even be repeated [Laughs]. If there’s something that doesn’t make sense for a character, we certainly weigh in on that and can discuss openly the more complex elements of what’s happening in a scene. … We try not to make it all superficial. There’s definitely deeper stories we’d like to tell.

Vanessa is often the voice of reason to Mike’s negativity, but is it a similar dynamic behind the scenes with your costar Tim Allen?

Maybe a little bit. I mean, I think that Vanessa is certainly more oblivious or more optimistic than Nancy Travis is, but I think we are in terms of me working with Tim. We definitely look at the show as a team effort and I feel comfortable telling him when something doesn’t work and likewise and I really value and respect his opinion which he can tell me. … We have a wonderful collaboration and I really enjoy working with him.

What else should fans expect as we head into the final three episodes of the season?

[Laughs] So the funny thing is, we stopped filming at the end of March and I don’t even know what the episodes are. [After] 150 episodes, I can maybe name five of them. I feel like we shoot them and they go right out of my head, and it is truly a great question for the fans because they know this show inside and out and they could tell you details about things I couldn’t even remember. But it just is some of our best stuff that’s about to come up, so I hope people tune in and enjoy it.

What would you like to see for Vanessa in the upcoming season? Any particular hobbies or plots you’d like to see play out?

I’d love to see what Vanessa does with her time now that she has time. So, we’ll see what happens and what happens to [her and Mike’s] marriage… they have a rock solid marriage but, now they’re alone together in a house basically, so what’s that gonna be like?

You may not be able to catch a glimpse of where Vanessa’s story is heading next, but we have an exclusive sneak peek at the 150th episode with the clip above. Check it out and don’t miss Last Man Standing, Fridays on Fox.