Meghan Markle left USA’s Suits in 2018 to marry British Royal Family member Prince Harry, and ever since, rumors have swirled of a possible return for her character Rachel Zane.

The buzz especially picked up after the network announced in January that the upcoming ninth season would be the legal drama’s last. On Tuesday at the 2019 Winter Television Critics Association press tour in Los Angeles, Suits creator/executive producer Aaron Korsh cleared the air about Markle. 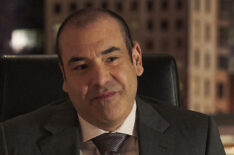 The firm will be going through another period of adjustment.

“We’re not currently pursuing, asking Meghan Markle to leave her position with the Royal Family and join us,” Korsh told reporters. “I would love it but I think it’s pretty close to zero.”

Markle (who is currently pregnant with her first child) played paralegal-turned-lawyer Rachel for seven seasons. She was the love interest of “fake attorney” Mike Ross, played by Patrick J. Adams, who also left the series after the Season 7 finale. Of course, there are rumors Adams could return for the big series finale. “I have discussed with Patrick when he left the possibility of coming back, and we both decided if the time was right and he was up for it and he had the time, that we would do it,” Korsh revealed.

“We’d have to figure out exactly what we would do with him and we’d have to have a general plan,” he added. “I wouldn’t break every story or the story so specifically before contacting Patrick and saying, ‘This is the general thing we’d do, are you available?’ Then we’d move from there. Since we just started… it’s on our brains.”

If you need your Suits fix in the future, its spinoff series Pearson, which follows disbarred lawyer Jessica Pearson’s new life in Chicago, just dropped its first trailer on Tuesday.