Nothing about Anne Burrell’s unconventional style — the swoop of white-blond hair, like a perfect peak of merengue on a cupcake, the groovy skirts peeking out from under her white jacket, the comfy, colorful ABEO kicks — really clues you in to the fact that the cohost of Worst Cooks in America is a trained chef with a degree from the esteemed Culinary Institute of America (CIA) in Hyde Park, New York.

She also studied for a year in Italy and then went to work in New York City as sous chef at Lidia Bastianich’s classic Felidia restaurant. From there, Burrell ran the kitchens of several top NYC eateries before finding herself in front of the cameras on foodie favorites like The Next Iron Chef: Super Chefs, Beat Bobby Flay (as a judge) and the 2015 Chopped All-Stars Tournament, where she won the $75,000 prize for the Juvenile Diabetes Research Foundation. 'Panettone is one of my favorite holiday foods,' says the chef and author.

For the past nine years, Burrell, along with a changing cast of cohost chefs, has been firmly but gently whipping a parade of truly awful home cooks into near-restaurant-worthy amateur chefs. Here’s what she has to say about Worst Cooks, the recruits and her sweet-salty teaching style.

Who dreams up the wacky challenges on the show?

Anne Burrell: We have an amazing pre-production team that comes up with the ideas, but I want all of the games to have a purpose — a teaching moment.

How do you stomach the bizarre dishes the recruits bring to the table on the first episode of each season?

It’s funny what people will do to food! The recruits simply don’t yet know how to think like a cook. I care so much about these people — I like to call them “lovable losers.” But I set a bar and I’m honest about what they’ve done right or wrong. And all along, I’m rooting for them. Has a recruit ever come up with an idea that you’ve adopted in your own kitchen?

I believe you can learn something from anywhere. These people look at things from an out-of-the-box perspective. They approach cooking in an unconventional way, and I always give them credit for that.

What do you think fans would be most surprised to learn about the show?

Two things: First, that a one-hour show takes two days to shoot. Second, how much actual teaching goes on. Everything we teach is a building block to a more advanced skill. For example, we always start with knife cuts. We teach the recruits how to sear a chicken breast in one episode, and then have them take that skill to sear a pork chop in a future one. It’s a crash course in culinary school. Plus, he talks his past weight loss and finding a healthy lifestyle as a chef.

Speaking of, you earned your cooking chops at the CIA. What was that like?

I loved culinary school. It was the first time I was in the right place in my life. I couldn’t learn enough or know enough. I teach with the same level of excitement for those light-bulb moments when things click and the recruits start to cook by themselves. It’s a warm, fuzzy feeling.

My mother was an amazing cook. We had a big garden and I’d go out and pick lettuce for salad. I liked cooking because it was like an arts-and-crafts project with something to eat at the end. And I loved Julia Child. I’d tell my mom, “I have a friend named Julie. I watch her every day on TV.” I give my mom the most credit for teaching me to cook, but it would be awesome to be some little girl’s Julia Child someday. Sticky Toffee Pudding for Anne Burrell’s Cookbook, “Own Your Kitchen” 2013

Directions:
Preheat oven to 350°. Butter a 9 x 13-inch baking dish. In a small saucepan, combine dates, rum and 3/4 cup water. Bring to a boil, reduce to a simmer and cook for 5 to 7 minutes. Remove pan from heat, add vanilla, and let cool. Puree in a food processor until smooth, and reserve. Sift the flour, cinnamon, salt and baking powder into a medium bowl. Combine the brown sugar and butter in a large mixing bowl and beat until combined. Beat in eggs one at a time. Gently stir the flour mixture into the butter-sugar in thirds. Stir in the reserved date puree.

Transfer the batter to the prepared baking dish and bake for 35 minutes or until set in the middle. Let cool. Meanwhile, bring toffee sauce ingredients plus ½ cup of water to a boil in a large saucepan. Reduce to a simmer over medium heat and cook for 15 minutes, whisking frequently, until the mixture thickens. To finish the pudding: Use a skewer to poke holes in the pudding every inch or so and pour half the toffee sauce over the cake and allow it to soak in for 20 minutes. Serve pudding in a warm pool of remaining sauce and top with whipped cream. 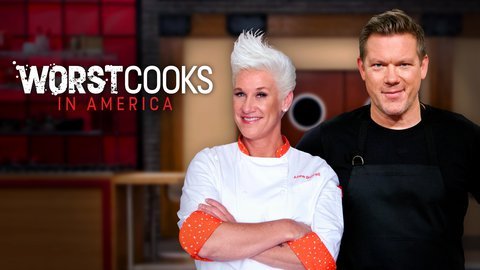 Worst Cooks in Americawhere to stream