On Sunday, Dec. 16, nearly 100 women from around the globe will vie to be Miss Universe in the 67th competition in the pageant’s history.

The competition will be hosted by TV funnyman Steve Harvey and will broadcast live from Bangkok on Fox. Model Ashley Graham will highlight the behind-the-scenes actions as the night’s backstage host, while TV personality and style guru Carson Kressley and supermodel/pageant expert Lu Sierra provide analysis and commentary throughout the live telecast.

Miss Universe 2017, Demi-Leigh Nel-Peters of South Africa, reveals that one of her favorite parts of the competition is the national costume competition. She explains, “It’s kind of a showcase for your country, your culture and what your country’s about.”

She also enjoyed the pageant’s preliminary rounds, where competitors meet with the judges face-to-face.

“Of course, it was stressful,” she laughs, “but it was great being able to have people get to know you and ask you questions about yourself. Nobody can fault you for being you, because you know yourself best.”

Nel-Peters shares that the moment that she was announced Miss Universe is one she’ll never forget.

“Hearing my country’s name being called out was such a once in a lifetime moment. It’s a moment I’ll never experience again. I remember being so proud to be able to represent my country and being so grateful that they trusted me to represent them.”

As Miss Universe, Nel-Peters has traveled around the world as a global ambassador for the Miss Universe message — “Confidently Beautiful” — while spreading her own message of female empowerment through her Unbreakable campaign.

In June 2017, shortly after being named Miss South Africa, Nel-Peters was the victim of a traumatic carjacking. She shares that her five attackers tried to force her into her car and kidnap her.

“Because of a woman-empowerment course I had done prior to that incident, I knew of the steps to take,” she says.

She fought off one attacker with a punch to his throat and was able to flee, later realizing that she could use her experience to help others.

“I just realized that I have a voice — I have a platform to be able to empower more women.”

As Miss South Africa and as Miss Universe, Nel-Peters has presented safety workshops around the globe where thousands of women have learned how to protect themselves.

As this year’s contestants arrive in Bangkok, Nel-Peters reminds them to relish the unforgettable pageant experience.

“You get so focused on doing well and doing everything perfect that you forget to just be present and take it all in,” she says. “I also wish I took more pictures!” 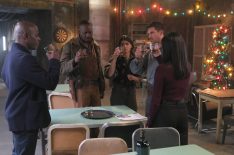 The Time Team is trying to save Rufus.

Nel-Peters shares that she looks forward to meeting her successor and passing on the title of Miss Universe.

“I can’t wait to see who she’s going to be,” she says. “I’m very excited for another girl to be a part of this sisterhood.”

She also offers this advice to the next Miss Universe, who is about to embark on an unbelievable jet-setting adventure.