Fox Stakes out a New Vampire Series With ‘The Passage’

This definitely doesn’t bite for fans of Justin Cronin’s novels!

Fox has given the series greenlight to The Passage, an adaptation of Cronin’s best-selling trilogy about bloodsuckers in a post-apocalyptic landscape starring Mark-Paul Gosselaar, The Exorcist‘s Brianne Howey and Entourage‘s Emmanuelle Chriqui. 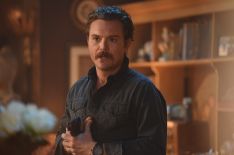 Described as “an epic, character-driven thriller about a secret government medical facility experimenting with a dangerous virus that could either cure all disease or cause the downfall of the human race,” the series is from exec producers Matt Reeves (War for the Planet of the Apes) and Ridley Scott (Alien: Covenant).

The Passage will focus on a “10-year-old girl named Amy Bellafonte [Saniyya Sidney], who is chosen to be a test subject for this experiment and Brad Wolgast [Gosselaar], the Federal agent who becomes her surrogate father as he tries to protect her.”

The show’s IMDb page lists Lost alum Henry Ian Cusick as a cast member, but that doesn’t mean he won’t survive this season of The 100, where he is currently playing Kane. Then again, it doesn’t mean he will survive, either. You know how they love to kill people on that one.

Expect to hear a LOT more pickups in the coming days as the networks begin unveiling their new fall schedules.