Can Carl’s Death Breathe New Life Into ‘The Walking Dead’ (and Who Will They Kill Off Next)?

As if fans weren’t already hamstrung by the two-episode, twelve-week fire walk that marked the end of Carl Grimes on The Walking Dead, the show’s writers followed his humdinger farewell with an epic bizarre-fest that made us wonder if anyone heard the kid’s dying wishes at all.

So it’s small wonder that TWD faithful are still debating whether Grimes Junior’s death was in vain—both in terms of steering his people toward peace and in steering a once-invincible ratings juggernaut away from its own demise.

Plainly put, at its outset, Dead assembled a highly watchable group of unknown actors into a roster of intriguing characters and an emotionally satisfying, nicely contained storyline that was unlike anything we’d before. Because the people we loved were being eaten up in “can they show that on TV?!” fashion by really disturbing zombies. And then their own drive to survive.

A few seasons in, the show shifted. More and more of the core group met their maker and new characters (and perils) rotated in. The TWD world got bigger and campier and harder to keep straight. The humans got scarier and the walkers decidedly less so, even as their gross factor went through an already sky high gross-factor roof. And fans started falling by the wayside, unsure of who or what to root for, and angered beyond recovery when certain biggies died. And Glenn’s eyeball popped loose.

Now Carl is dead, too, and even people who never liked the kid feel wronged, manipulated and uncertain if Dead could recognize a turned-tide when it sees one, for good (the guy was finally getting interesting) or for bad (and now he’s [email protected]#$ing dead). So we’re making a case for both sides of the coin. That good stuff can come of Dead‘s most massive departure from the comic that spawned it. Or that maybe it’s time that the zombie drama belatedly adopt a Breaking Bad modus, march assuredly toward some well-crafted closure and stop giving us a weekly case of the WTFs. On your mark, get set, pick your poison.

Carl’s death is OK, because ….

Carl’s final days and actions and plainspoken hope for a peaceful future finally gave a spine to Season 8’s meandering “can you kill your way to peace?” debate. Rick has clear marching orders if he wants to honor his son’s legacy—and let that legacy be one of a wiser man, not a lonely boy wrestling with one hell of a home life.

His last wishes also give us a litmus test by which to measure how other characters approach the fight and the future and the value of human life—especially when they don’t know the humans. Suddenly Negan’s “one to make a point” kill strategy seems damn near altruistic, even if he does keep Lucille handy (but then who DID make the call that mowed down so many of the Kingdom fighters? Simon? That you?).

And Morgan, thus far a more sympathetic character than Negan, mowing down Saviors willy-nilly seems like … well … the actions of a guy who will be shuffled off to Fear the Walking Dead next month.

Killing off Carl also forces Rick’s hand in the truth of his “I did this all for you” deal. He didn’t save his boy, but he has redemption in toddler Judith, even easier pickings in an intensifying war. Given that and his “I’ll make it real” promise, his dad honor has never been more on the line.

So a different man and a different leader really should emerge. A much more interesting one than the perpetually sweaty and bleary-eyed walking anxiety attack we’ve grown to know and … tolerate … ish. That would be so, so much a good thing (not to mention, the intriguing change of pace in watching our characters doing something, anything other than fight).

Problem is—all evidence to the contrary thus far. Absent Carl, only Michonne is directly in Rick’s emotional line of fire to call him on his blood lust and myopic focus on Negan’s death, even as the danger of his current modus has never been more painfully evident. Neither Negan nor his minions killed Carl and Rick knows it, not to mention the part where, had Rick OK’d their saving Saddiq at the outset, Carl needn’t have gone back for him. 'The Walking Dead': What That Midseason Premiere Twist Could Mean for Rick

'The Walking Dead' shed some light on those flash-forward scenes.

Negan’s genuine sorrow over the death of the heir apparent he hoped to coax over to his side felt more genuine and fatherly than Rick’s own turmoil—thus far, the SOP sweat-soaked pacing and snarling he applies to damn near every situation since time immemorial.

Sure, he could be shell-shocked. Sure, he didn’t kill Jadis when he could have. But he didn’t show her mercy, either, so it’s hard to apply any real change of heart right there. What should be front of mind, regardless of how badly he wants to off his enemy, is that his people need to reach a stocked and fortified homestead, and then regroup for a collective response to Negan’s latest efforts.

Pregnant Maggie, who has suffered equal losses and is bringing an infant into this world, seems to understand her place, her people and her resources—and the power of time well bided—far better than Rick. But there are still six episodes to go.

Carl’s death is death for TWD because…

Killing Carl wipes clean the comic series’ core storyline—one the comic’s fans looked forward to because it shaped Carl’s own character evolution and the tenor and future actions of the group whose leadership he grows into.

Yes, the mythology’s creator Robert Kirkman has said he takes no exception to the show making this epic swerve. But Dead still needs a future generation—someone who has come of age in the apocalypse with little “the way it was” baggage to color his or her idea of better days and the twisty morality of a personal universe in which anyone, everyone, could die tomorrow.

Maybe that person will now be little Henry, who suffered so much loss, was trained to kill (OK, survive) and then walked back from his skills set. Maybe Enid takes the girl-power reins and picks up the peacenik gauntlet thrown down by her lost beau/friend. Maybe Season 9 jumps decades into the future and Rick’s Little Ass-Kicker and Maggie’s will show us how it’s done. But right now, even with Grace in her crib and Baby Rhee in Maggie’s belly, everything just seems endlessly bleak. And then there is this. Even diehard fans are suffering an overabundance of characters we barely know, never mind knowing them well enough to care. The snippets of time we’re afforded with our favorites hardly stave off a nagging apathy. Picking off Carl further hobbles diehard TWD fans’ hope of reassembling the remainder of our core group into the scrappy, resourceful (and ultimately triumphant) unit that fed our addiction to the show in the first place—and with no sign of an equally compelling B Squad.

In October, Scott Gimple told TV Insider that his group had great plans for Dead‘s next 100 episodes. But will any of the able actors who got them there in the first place be around, since only Andrew Lincoln (Rick), Melissa McBride (Carol), Norman Reedus (Daryl) and Lennie James (Morgan) remain? And James already has his transfer papers.

So will we even riot if Daryl dies anymore?! Or has too-many-characters fatigue a) numbed our concern for the guy and b) chased many of our fellow rioters away seasons ago?

As I’ve said in past recaps, I never much liked Carl … until I finally did. Until his fresh perspective was injected into All Out War when I really, really needed it. And then they killed him and his evolution, and another longtime cast member was cast aside in favor of a whole lot of also-rans who’ve yet to win our hearts. It’s hard to image how that could bode well. With little regard for longtime cast members and so many current ones in the “Meh” column (I’ll paint the targets on Gabriel, Tara and Rosita myself), which jaw-dropper death could come next? Since we don’t know the timeline of Morgan’s Fear stint, could be him—but that wouldn’t be much of a shock.

Dead fans fear the announcement that Lauren Cohan, locked in a contract dispute with the show’s executive team, has signed onto an ABC pilot. Maggie’s lack of baby bump could certainly be chalked up to a timeframe that seems much longer as we wait many months for new seasons. Or could she have a target on her head, too, and killing a visibly pregnant woman is a risk even Dead won’t take? 'Pay the woman,' said the actor, who plays Ezekiel on AMC's hit.

The double-dealing Eugene would seem an epic loss, at least to me, if only for his much-needed injection of levity. Some fans think it might be Negan, too, given the mutiny that’s a brewin’ in his own ranks and both Rick and Maggie’s ire.

But that’s precisely where Carl’s death might truly lead to salvation—for our brave survivors and for The Walking Dead. In the comics, Rick ends his war with the Saviors by sparing Negan’s life, not taking it. Carl wrote to both men, urging peace. We saw Negan tending veggies in Carl’s dreams.

A scenario in which Rick chooses not to pull the trigger on Negan or Negan chooses not to make mush of Rick’s head seems a long, long way off—longer than our already tested patience has to give it. But detente would honor Carl’s wishes like none other. And give Dead a fresh focus: rebuilding the world. 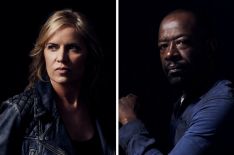 The AMC hit returns this April.