Caught on Tape! Will ‘The Bold and the Beautiful’s Bill Spencer Get Busted for Arson? Don Diamont Talks

He plays dirty—and now that’s about to bite him in the ass. The Bold and the Beautiful’s Dollar Bill Spencer (Don Diamont) is a ruthless publishing tycoon determined to build a flashy mega-skyscraper—an homage to his own awesomeness—on land that’s currently owned by Spectra Fashions. When Bill couldn’t buy the property from them, he arranged for the struggling design house to get torched. On September 7, the cocky mogul once again admits his crime to his Good Samaritan son Liam (Scott Clifton), then realizes Liam has recorded the entire conversation. Does Bill freak out? No way. Diamont drops the dish.

Has Bill lost his mind? Why would he confess to arson—and to his super-altruistic kid, of all people?

Bill is operating by the same code as the Mafia: Family loyalty is everything. A son does not rat out his dad. Bill’s done everything for Liam—loved him, protected him, lifted him up in the world. And now he expects that devotion in return. [Laughs] This is a test for little Dougie Do Gooder!

Liam is threatening to contact the police. Does Bill think he’s bluffing?

In the moment, Bill doesn’t care. He’s more concerned about having his ethics questioned. He’s like, “I break the rules and you, Liam, enjoy the spoils—the yachts, the helicopters, the fast cars! I’ve given you wealth! Privilege! Don’t you f—ing stand there and judge me!” If Liam murdered somebody, Bill would bury the body. That’s how we do things in the Spencer family.

Still, Bill’s gotta be shocked that he’s been caught on tape, no?

Oh, it’s absolute hurt and betrayal. It’s a very intense scene. But even if Liam does have the balls to go to the cops, Bill knows—and owns—a lot of people in town. His money and influence are spread far and wide. He’s spent his life getting himself out of calamitous situations and thinks he’s powerful enough to get himself out of this one too. In our current political situation, there’s a lot of talk about following the money. Well, follow Bill’s money and you will see exactly why he’s not worried about little Liam.

He’s the J.R. Ewing of daytime!

Do you know I’ve never seen Dallas? Or Falcon Crest or any of those other primetime soaps of the ‘70s and ‘80s. I was much more of a Starsky & Hutch man back then. But from what little I do know of J.R., he and Dollar Bill seem to be similar guys. Bill showed up on B&B as the ultimate misogynist powerbroker. My very first story was with Donna—the one where Bill said, “Sleep with me and I won’t put Eric in jail.” So he’s that guy. Bill doesn’t see life as neat and tidy. You have to get your hands dirty. I love this role, man! [Laughs] I’ve never so much freakin’ fun!

Is Bill is playing with a full deck? How else to explain such narcissistic brazenness?

I don’t want to get super deep about it, but I think what’s driving him is self-loathing. It’s the classic “bastard son” thing. Bill always feels he needs to prove that he’s better than anybody else. But, no, I don’t think he’s demented or delusional. 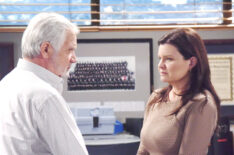 He sure felt comfortable lying about Caroline having incurable cancer, which has caused Thomas incredible heartache. You don’t think that’s a little bit sociopathic?

Hey, Bill tried going to Thomas with the by-the-book version of why he should do the right thing and stop working for Spectra and he got nowhere. So he played the cancer card. Does he feel bad about that? Hell, no. As Bill sees it, this may hurt Thomas a little bit now but he’ll get over it when the truth comes out. All’s well that ends well. And, despite how the audience might feel about Bill lately, I do believe his heart has been opened by Katie, as well as by Liam and Wyatt, sons he didn’t know existed for the longest time.

But now that Liam is a danger—like a smart, socially-conscious version of Fredo in The Godfather—how important is family really?

Now that’s an interesting dynamic. Bill’s true baby in this world—the thing he cares most about—is Spencer Publications. It’s his life, his first-born child, the thing he created through blood, sweat, tears and intimidation. He loves his boys, however, he didn’t have them for most of his life and he doesn’t need them for the rest of it. But the company goes on!

If Bill is wrong about Liam’s threat—and we suspect he is—it would make for some damn juicy drama. What if your character ends up in the slammer or, worse yet, loses his beloved Spencer Publications? Do you hope he goes down for this?

One hundred percent! The reason Muhammad Ali is considered the greatest boxer of all time isn’t because he never lost a match. It’s because, when he did get knocked down in life, he’d do whatever it took to get back up. So I’m fine if Bill’s world collapses around him because I know he would fight like hell for a comeback. [Laughs] The only way to stop him is to kill him.