Break out the s’mores and bug spray, ’cause camp is back in session. Netflix’s Wet Hot American Summer: Ten Years Later is the latest addition to the spoofy cult comedy juggernaut—which also includes the 2001 movie and the 2015 Netflix prequel series, First Day of Camp—from cocreators and stars Michael Showalter and David Wain. When the action resumes, a decade has gone by since the randy teen counselors last said “Walla-walla-hoo” in 1981, and the motley crew is about to gather for a reunion. “Our characters are in their mid-twenties now, and they’re returning to Camp Firewood, as promised, to see what kind of people they’ve blossomed into,” Showalter explains.

Per usual, a variety of shenanigans will be afoot on the shores of Lake Winnisooky. “Things start off in relatively straightforward fashion—romances will be rekindled and old fissures will be revisited,” Wain says. “But pretty quickly, you find out that something else is looming that will threaten the camp as a whole and take them all the way to the White House.” (Think Showalter returning to his rendition of Ronald Reagan, Michael Ian Black as George H.W. Bush and Wain channeling then–Arkansas governor Bill Clinton.)

A slew of A-listers, including Elizabeth Banks (Lindsay), Janeane Garofalo (Beth), Chris Pine (Eric), Kristen Wiig (Courtney), Amy Poehler (Susie) and Paul Rudd (Andy), will reprise their roles for the eight-part ride, and they’ll be joined by an impressive roster of newbies. “We brought in actors who would fit right in with our sensibility,” Wain says. “All of them could’ve easily been in the original, but just happened not to be.” Here’s a primer on the fresh arrivals stirring up some summer camp silliness. MIKEY (PLAYED BY DAX SHEPARD)
Mikey and his wife (Kerry O’Malley) share a home with the mysterious Vivian (Marlo Thomas) and serve as her ­guardians. When roving reporter Lindsay (Banks) comes a‑knocking in search of answers, “Mikey slams the door on her hand,” Wain says. “He can tell that he’s being threatened by some outside force, and Dax captures that jittery quality in a very funny way.” MARK (PLAYED BY MARK FEUERSTEIN)
A quintessential Wall Street yuppie, Mark has been going steady with girlfriend Claire (Sarah Burns) ever since their early Camp Firewood days. You don’t remember Feuerstein being part of the core group? There’s a reason for that. “All the great reunion movies like St. Elmo’s Fire have that central couple,” Showalter says. “So we decided to invent ours and pretend that they were there all along.” 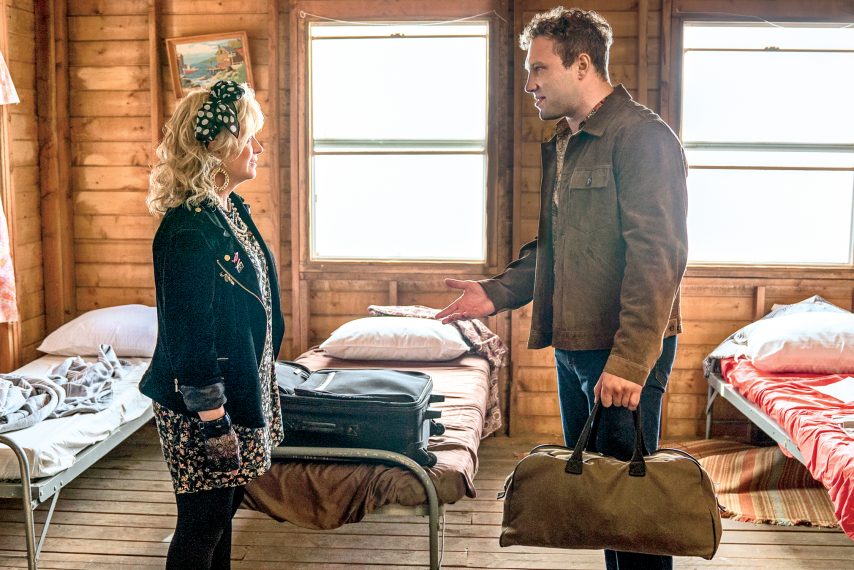 GARTH (PLAYED BY JAI COURTNEY)
Renaissance hunk Garth, an up-and-coming indie actor, arrives on the scene as Susie’s (Poehler) arm candy. The lovebirds are mixing showbiz with pleasure: She’s a hotshot producer and he’s the lead in her next flick. “Garth seems down-to-earth and devoted to Susie,” Wain says. As for the Suicide Squad-er himself, Wain adds, “Jai is a serious actor, but boy did he commit to the stupidity of what we’re doing!” Netflix will produce 8 episodes of RENATA (PLAYED BY ALYSSA MILANO)
Hired to babysit the son of wardrobe-conscious McKinley (Black) and his partner, Ben (previously portrayed by Bradley Cooper, unavailable this go-round due to scheduling conflicts), during the reunion, this pert übernanny “really is perfect in every way…or so it seems,” Showalter says, acknowledging that the Who’s the Boss? alum adds a nostalgia bonus. “She’s an icon of that time period!” ??? (PLAYED BY ADAM SCOTT)
Though specifics of Scott’s role are sealed up tighter than a can of vegetables (and yes, someone actually plays just that in this anything-goes universe), rest assured that the Parks and Recreation star will be fully utilized. “His plotline will dovetail with McKinley and Renata,” Wain teases, “and Adam gives the material his [trademark] dry delivery, with just a hint of the melodramatic.”