On Alaskan Bush People episode “Unanchored” (July 12), as the Brown family awaits Ami’s treatment options, this Lost Episode shows the wolfpack’s ability to endure through hardships in every environment. Adrift on the shores of the Alaskan wilderness, the wolfpack rediscovers their need for adventure. On the 'Alaskan Bush People' episode 'Strength in Numbers' (July 5), the Browns continue to deal with the devastating medical news they’ve received about Ami.

The Lost Episode “Unanchored” is the latest example of how badly this “unfolding in real time” season has backfired on Park Slope and Discovery. They rushed this season to the screen so they could exploit the drama surrounding Ami’s illness, but they can’t film and edit new footage fast enough to make it to air every week. So they’re picking some Season 1 stuff up from the cutting-room floor, piecing it back together and calling it new. That’s why this episode feels like the crap they air during a NASCAR race rain delay.

The episode opens in Brownton Abbey, as we find Noah doing his bizarre solitary Noah stuff. He needs to fix a light bulb, only there’s a serious obstacle impeding him: a fairy circle. There are a bunch of sticks implanted in the ground in a circular pattern. “In folklore and legend, a fairy circle will trap you if you walk in it,” Noah explains. “It’s trespassing.” This fairy circle appears to be no more than two feet in diameter, and it could easily be avoided. But Noah takes this hocus pocus seriously, and he must make an offering to the fairy circle if he is to pass through it with impunity. “An offering can be anything the fairies will like,” Noah says. “Being that Bear is the fairy that created this, the offering is some bones with some red on it. Right up his alley.” Hey, remember in Season 1 when they moved up to Chitina? “All nine family members were successful in building a cabin just before winter arrived,” Our Dear Narrator Asa says. This is tremendous B.S., since we all know that Billy spent most of the time sleeping off his Billy Brown Syndrome while a bunch of local “volunteers” did all the work. (BTW, why does Asa need to quantify the Brown family members in every freakin’ sentence? Yes, we understand nine already. There are nine, one for each circle of hell.) See that guy on the far right? He’s not one of the nine-member Brown family, because he looks like he knows what he’s doing.

And then all those nice people who helped the nine-member Brown family build their cabin decided to raise arms against all nine of them. “The presence of a documentary film crew drew opposition from some locals,” Asa explains. Why, yes, because their cabin was not very remote and most people don’t like helicopters hovering above their houses day and night. Also, it’s cold up there, and the Browns—there are nine of them—and the production crew don’t like Alaska in the winter. So the producers fabricate this story about locals shooting at the nine Browns in the middle of the night. “To avoid any further conflict, the Browns decided to find a new piece of land in the more temperate and isolated rainforests of Southeast Alaska.” That’s Brown family perseverance for ya.

“In 2013, they relocated to Juneau to purchase an old boat they could fix up and live on for pennies on the dollar,” Our Dear Narrator says. Ah, the Opal. What a fine vessel it was.

Yes, I love that photo. I’m buying it printed on a mug and a mousepad. Then there’s a scene with Gabe complaining about having to do laundry in the Bush while Bam stands guard with a shotgun. If that’s not exciting enough for you, there’s a lot more scenes of Billy panning for gold. I’ll just rerun this pic, too, since we’re rehashing old stuff here. 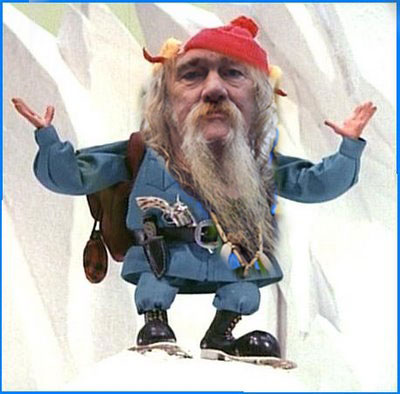 In Ketchikan, Billy meets up with Cowboy Dean, whom we’ve seen before. We know him as the guy who once ate a pine cone and was constipated for a week. Also, he pulled out his teeth last night because the dentist wasn’t going to get around to it for another week and Cowboy Dean was tired of eating mush. Cowboy Dean is not a patient man. Oh, Billy. Sadly, gold does not heal everything. After Cowboy Dean fills Billy in on one of the ugliest women you ever did see (Holy criminy!), they go prospectin’ in Cowboy Dean’s “honey hole” that supposedly has untold riches buried in it. If you truly had a honey hole, why would you bring other people to it? I suppose you could bring someone out to your honey hole if you intended to beat them over the head with a pan, steal whatever gold they found and then leave them for dead in the creek…uh, not that I would suggest actually doing something like that….Hey, look at that nice “pooper log!” HYAH! Billy and Cowboy Dean find bupkis. Billy gets to live, but if he says anything about the honey hole to anyone, it’ll by HYAH! for him.

Meanwhile, the five Brown boys are in Ketchikan seeking young lady tourists who desire a romantic interlude with an authentic Alaskan smelly idiot dirtbag. “When the cruise ships come up, they’re just packed with girls,” Matt says. There are probably also a lot of girls packed in Matt’s root cellar. It’s raining in Ketchikan, so all the tourist girls go shopping instead of stand out in the rain like imbeciles. Being harassed by jackasses was not on their Alaskan cruise itinerary. The boys break out some of their finest pickup lines. Gabe: “What’s your favorite bird?” Bam: “Nobody told me there was a cruise ship with models in town.” Noah: “Those are terrible, aren’t they?” He means those crutches, not the genetic mutation that gives people blue eyes. Noah tries to impress Crutches Lady with failed card tricks. Matt talks up a girl, Amanda, with his knowledge of polka dots. “You spend too much time on the islands and you start going loco, you know? Pick up strange hobbies,” Matt says. You know, like playing with explosives in the bathroom. Billy comes up empty at the honey hole. The boys come up empty with the honeys. A banner day for the Brown men. What else could go possibly go wrong?

Boat Malfunction! As the boys take the Opal to go on a hunt before picking up their dad, the boat can’t turn left. There’s no “port action” at all. The water’s too deep for them to drop anchor, yet they’re worried about drifting into a reef. So they keep the boat going in a circle, just like this TV series. Noah determines that a ram bracket doohickey is broken, so the wheel won’t turn the rudder. Noah and Matt take a skiff (not the Skiff) ashore to find a replacement bracket. They end up at a shop that looks like a Goodwill for boat parts. Lo and behold, they find a bracket that matches. And that’s the end of that chapter. On the 'Alaskan Bush People' episode 'The Long Road' (June 28), a major diagnosis shakes the Brown family, and forces them toward a decision that could reshape their lifelong journey.

The Opal returns to whatever temporary camp the Browns have set up, and all nine of them are together to share a meal and stories of their day’s failures. Discussion turns to how Rainy really wants a dog. Why do they need a dog? “’Cause, like, bears and stuff,” Rainy says. “It’s like, protective.” Besides, Rainy gets whatever she wants. Look at 10-year-old Rainy, still a sweetheart. Won’t be long before she discovers excessive makeup, weird hats and teenage ennui.

Billy tells us about the family’s previous dog, Brauner, pictured here with what looks like Bear as a toddler. Bear is still mentally a toddler. [Update: I’m told that it’s Birdy. Same thing applies.] If this were a sitcom, the live studio audience would go “Awwwwwwwwwwww.” Mama, don’t let your babies grow up to be EXXXXTREME! Despite his family’s unfortunate history with aviation, Billy hops on a floatplane, then skiffs it to a floathouse where puppies are plentiful. After some brief unintelligible babbling from the dog’s owner, he hands over the pooch—known as “Badge”—to Billy. Back at the Brown family camp, the boys decide they need some straight cash, homey. Gabe wants to buy a brick of chocolate with almonds and bury it six feet below ground. Practical Bam wants to buy new boots. But how do most people who don’t have contracts with a TV production company get this paper money? They could get jobs, but where would they find them? Noah hadn’t yet turned into the self-important sack of pus we know today, but the signs were there. At least he’s not a snob: He’ll work with anyone except racists and people who are disrespectful.

Matt and Gabe find gainful employment at the Cedars Lodge in Ketchikan. Cedars Lodge processes and ships fish that tourists catch on their excursions. (Reviews are mixed.) Matt and Gabe are tasked with packing geoducks (pronounced “gooey duck”), a highly profitable mollusk that’s served as a delicacy around the world. And, yes, we won’t tiptoe around the fact that the geoduck bears an amusing resemblance to male genitalia. Geoducks also “seem to retain a lot of the juices,” Gabe says, which lends itself to gifs like this:

Billy brings the puppy home and presents it to Rainy, who names him Mr. Cupcake. So that’s Cupcake’s origin story, right? Eh. Maybe not. The Browns get the puppy before the Opal sinks in Ketchikan, yet there’s no evidence of the Browns having a puppy when they “lost everything” in the sunken boat. Could it be possible (in the fake ABP universe, of course) that Badge went down with the ship and Mr. Cupcake is really Mr. Cupcake II? I will devote the rest of my career to uncovering this conspiracy.

Now for a look at all the exciting things yet to come on this season of Alaskan Bush People, which can start any week now.

It’s too damn hot. You can literally fry an egg in the sun, marking the first time Bear has correctly used the word “literally.” Bear says his eggs are “frambled,” a mix of fried and scrambled. Frambled also applies to what Alaskan Bush People does to the human brain.

At some point, whenever the producers feel like getting around to showing it, the Browns will temporarily move to Colorado. Billy could totally see himself defrauding and sullying that state. “It’s breathtaking,” says Ami. Hope she enjoyed that week or so in Colorado, because they had to move her back to SoCal for cancer treatments. Thanks for making it to the end of what was essentially a recap of a rerun. At least we still have this to look forward to: