There’s only room for one murderous stalker in London. Joe Goldberg hunts down his competition in the You Season 4 trailer, above, dropped by Netflix on Monday, January 9, and this mystery assassin is taking pages from his own book by sending texts mimicking Joe’s inner monologue. “Hello, Joe,” one ominous message reads. “Now do I have your attention?”

Penn Badgley‘s Joe has fled to London in You Season 4 to “get away” from his troubled past (you know, the one he created) and try to move on from his obsessive, deadly tendencies (we know how successful those efforts have been). But the tables are turned on him as someone nicknamed the “Eat the Rich Killer” goes on a murder spree among London’s elite.

Joe, disguised as a university professor named Jonathan Moore, has a suspicion the killer is one of the people in the new social scene he’s found himself in as he simultaneously looks for (and finds) Marienne (Tati Gabrielle). “After his previous life went up in flames, Joe Goldberg has fled to Europe to escape his ‘messy’ past, adopt a new identity, and, of course, to pursue true love,” the Season 4 logline teases. “But Joe soon finds himself in the strange new role of reluctant detective as he discovers he may not be the only killer in London. Now, his future depends on identifying and stopping whoever’s targeting his new friend group of uber-wealthy socialites.” 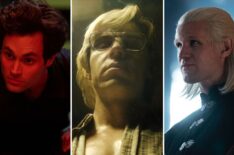 Ranking TV's Terrible Men the Internet Loves, From Intolerable to We Get It

The fourth installment of Netflix’s obsessive hit will be released in two batches. You Season 4 Part 1 drops Thursday, February 9 on the streamer, with Part 2 releasing one month later on Thursday, March 9. Each batch comes with five episodes.

Badgley steps into the director’s chair for Season 4 Episode 9. Additional directors include John Scott (401, 402, 406), Shamim Sarif (403), Harry Jierjian (404, 405, 410), and Rachel Leiterman (407, 408). The series is developed by Sera Gamble and Greg Berlanti. Gamble serves as showrunner and executive producer, with additional EPs including Berlanti, Gina Girolamo, Leslie Morgenstein, Sarah Schechter, and Michael Foley. You is a product of Warner Bros. Television.

Will Joe’s past finally catch up to him? Here’s to hoping.