There have been quite a few changes at Warner Bros. Discovery in recent months, including not only the cancellations of some of HBO Max’s original series, but also the removal of programming as well. Among the shows that were cut was Genera+ion, canceled in September 2021 but pulled from HBO Max’s library in August 2022. But now there’s good news, thanks to Tubi.

“Thrilled to announce that @generationonmax has found a home for ALL @Tubi
– all we ever wanted was to make people feel seen and now everyone can watch starting February 1st!!! We are thrilled. Please spread the word far and wide. With love and gratitude – Z, D & B,” reads a message from creators Zelda Barnz and Daniel Barnz and executive producer Ben Barnz, posted on Ben’s Twitter.

The changes to HBO Max’s offerings came as a result of the streaming service and discovery+ combining under one platform. In addition to Genera+ion and other content being cut in August 2022, Warner Bros. Discovery announced several months later in December that certain HBO and HBO Max original programming would be licensed to third party FAST services to be part of a packaged offering. As a result, shows like Westworld, The Nevers, Raised by Wolves, Legendary, and The Time Traveler’s Wife were removed from the streaming platform. 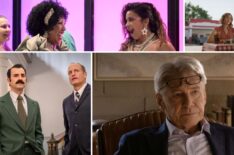 Other series that were removed but have yet to find new homes are Gordita Chronicles, Love Life, Made for Love, The Garcias, and Minx (the second season of which was filmed before it was canceled despite previously being renewed).